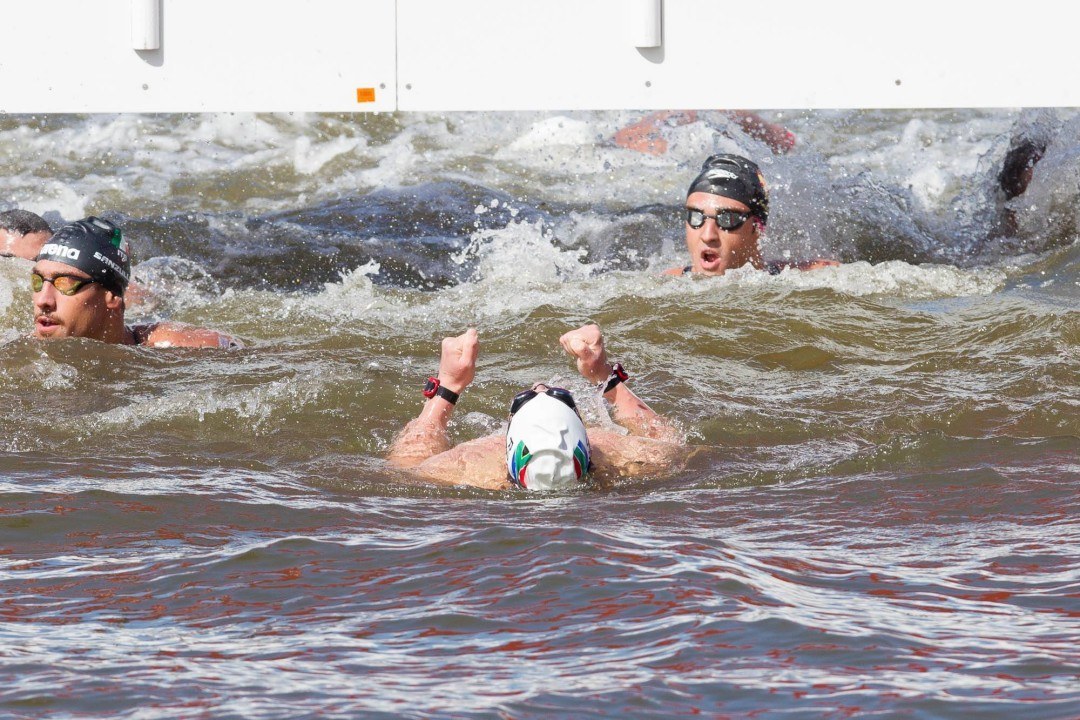 An intense finish led to a moment of euphoria for South African Chad Ho in the men's 5K on Saturday in Kazan.

South African Chad Ho says that he had ‘no tactics’ en route to winning the men’s 5km World Championship on Saturday in Kazan, Russia, the first men’s gold medal handed out at this year’s championships.

Ho said that he had no serious tactics for the shortest of the elite open water distances, just to stay with the pack, swim as fast as possible, and get his hand on the pad first. That cavalier attitude worked out well for him, as he was just barely able to out-touch Germany’s Rob Mutffels, who took 2nd.

The German admitted after the race that he didn’t take the best line of the swim, and there he was outclassed by Ho who was on a bee-line toward the touch pad.

Ho finishes his interview by pointing out what most of the swimmers are thinking. While a win in the 10k would be nice, it’s all about the top 10 on Monday morning and securing a spot at the Olympic Games – a relatively tough road to a field of 25 in the open water as compared to the pool.

Ho knows that too well; after swimming at the 2008 Olympics at just 18, in 2012 he was assigned to the open water qualifier event in Portugal but finished just 12th to miss the Olympic Games.

This was Ho’s second World Championships medal in the 5k; he took bronze in 2009.

Congrats Chad! That was a brilliant swim. Well done to all of the people who crowd funded your trip to Kazan. The “return on investment” has been astonishing!

You are the man.