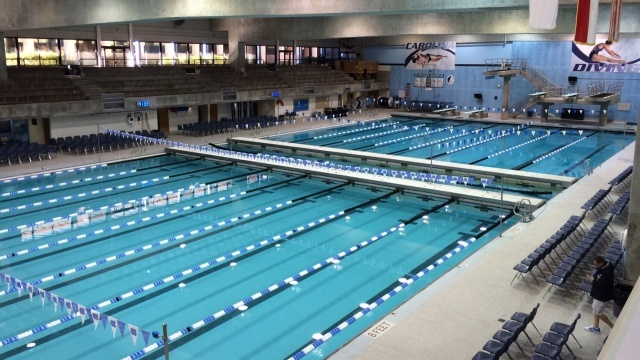 Over two dozens new career bests were posted by the athletes swimming in the third day of competition at the Carolina College Invite, NC. Current photo via UNC Athletics/GoHeels.com

They might have missed the opening half of Super Bowl 50 thanks to a swim meet, but the college swimmers at the 2016 Carolina College Invitational participated in a competition of their own on the third and final day inside Koury Natatorium, Chapel Hill, NC. The most competitive teams in tonight’s finals were NC State, North Carolina, and Duke, who together posted a total of 24 career best between them. This group of North Carolina college teams will meet again this month for the 2016 ACC Championships hosted by the Greensboro Aquatic Center.

Caroline Estep of NC State traded up her third place seed from this morning in the 200 back for the top finish in the finals at 1:58.61. The prelims winner, Liza Bragg of Duke, fell to Estep in this race with a slight add to finish in 2:00.04. The Wolfpack got the win in the men’s race as well, taken by freshman Parker Campbell at 1:46.74 with Blue Devil Alex Pena (1:47.71) on his heels for second. William & Mary ‘s Joey Rento scored big for his team at 1:49.11 to pick up third place for the Griffins.

Duke’s Kathryn Eckart swam the fastest women’s 100 free in at 50.14 this morning and defended first place tonight with a slight drop at 50.14. Taking a huge leap up from eighth in prelims to runner-up in finals, Kathryn Ford shaved off .33 of a second to finish in 50.74 for the Tar Heels. The  Blue Devils almost got a pair of victories with the men’s 100 free as Adriaan Venter, who claimed prelims at 44.61, got out touched by .01 in the finals thanks to Christian Caveness (44.91) of North Carolina.

In the women’s 200 breast, Rachel Canty picked up her second breaststroke title of the weekend with her mark of 2:12.23 while second place finisher, Maddie Witkze, was forced to race a 2:17.42 in order to fend off two approaching Duke swimmers. NC State’s Geoffrey Carter may have tacked on some time during the finals of the men’s 200 breast (1:59.76), but he was the only one who posted two swims in under two minutes in the event.

NC State and the North Carolina were the only two women 400 free relays to swim and the two in-state rivals went head-to-head. The Wolfpack quartet of Estep, Christine Kerr, Emmie Barnhill, and Mariah Hamil came out of the race on top, defeating the host team to cap the night at 3:23.47 to 3:29.87.