Carmel Swim Club: What Happened After It Happened 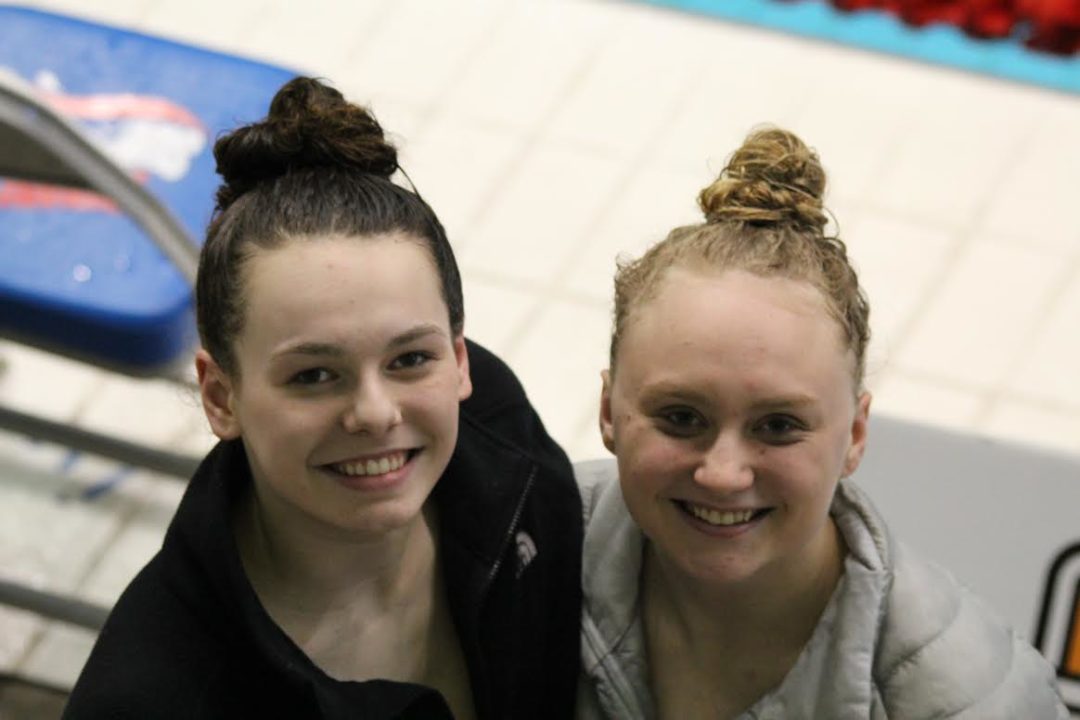 Claire Adams and Katy Schiles took a moment out of their celebration for a humble and selfless act on Saturday. Current photo via Todd Adams

Tyler Hulet’s 21.80 back leg helped The Woodlands nab the 200 medley relay Texas state record, while he followed up with a win in the 100 back.

Carmel High School’s performance in the pool at the 2014 Indiana High School State Championship meet on Friday and Saturday was nothing shy of impressive. It’s worthy of all of the superlatives that it gets, including one of the top-5 high school performances ever at a single meet, and in this writer’s opinion, the most impressive by a girls’ high school team in the last decade.

But that might not even be the most impressive performance from Carmel on Saturday.

On Monday morning, we got a note from Dave Thibodeau, the Facility Manager of the pool at IUPUI (the big one, who hosted this meet), sharing a story about two Carmel swimmers who really caught his attention.

“Last Saturday, just after the Carmel High School girls were jumping into the diving well to celebrate their win, I noticed two Carmel swimmers pushing a garbage can around the pool deck,” Thibodeau shared. “They were cleaning the pool deck. I watched the two climbing over and under each bleacher to gather the trash. This was happening while Carmel High was still whooping and hollering in the diving well as they earned the right to do.”

“I approached the two girls to ask ‘why’? They told me that we, the NAT, shouldn’t have to clean up after their swimmers.”

Thibodeau says that he was shocked when he learned the names of the two swimmers. One was Claire Adams, who broke State Records in the 200 free (1:46.95) and the 100 back (52.97) in both prelims and finals as just a sophomore. She was also on both the National Record setting 200 and 400 yard freestyle relays.

The other was Adams’ best friend, Katy Schiles, also a sophomore, who placed 12th in the 500 free.

Thibodeau says that implored the girls that they didn’t have to do that, and that this was their time to celebrate, but that they wouldn’t stop until they’d finished a loop of the pool deck (and it’s quite a deck in Indianapolis, as many of our readers know).

These aren’t student managers; they aren’t end-of-the-bench swimmers who might not feel connected to the team’s win; they aren’t even senior captains who want to leave a good impression in their last meet with the team. These are 15-year old sophomores who both were big contributors to the title and who will be huge building blocks for the future of this Carmel Swim Club.

There’s a lot of confusions that could be drawn from this, and handshakes are offered all around to the coaches, the parents, and especially the swimmers for such a humble and selfless act. Carmel High School is an Indiana dynasty. Not every member of that team has lived in Carmel their entire lives, but with performances like their’s, and character like that in those two swimmers, it’s easy to see why people moving to Indiana wind up there, and why this dynasty has been around for 28 years. It’s a small thing, something that could have easily gone unnoticed, but something worthy of much laudation regardless.

First of all, congratulations to Carmel on an unbelieveable meet! Other teams could learn from the way Carmel conducts themselves at the meet. They are supportive of each other and respectful to their competitors. Indiana teams love to hate Carmel because they are always on top, but they are always on top, because they have a first rate program. Job well done ladies, outclassing the competition in and out of the water!

This story should remain the headline story until this site goes down!

This is a great story. Thank you, Ladies, for showing true grace and class regardless of success.

I was just in attendance at a HS Regional-level meet in which two separate classes (large and small) competed on opposite ends of the pool simultaneously (440+ swimmers). To top it off, an age-group meet (290+ swimmers) was conducted immediately before the HS meets in the same facility. In essence, the USA swimmers were shooed off deck in a hurry while the HS swimmers got ready to start warm-up. A quick look at one side of the pool showed that it didn’t even look as if a meet had gone on that day: no trash, no suits, caps, goggles, shirts, shorts, banana peels,… Read more »

BaldingEagle- if sending pictures to the coaches and president did not help, I would send a cleaning bill next time.