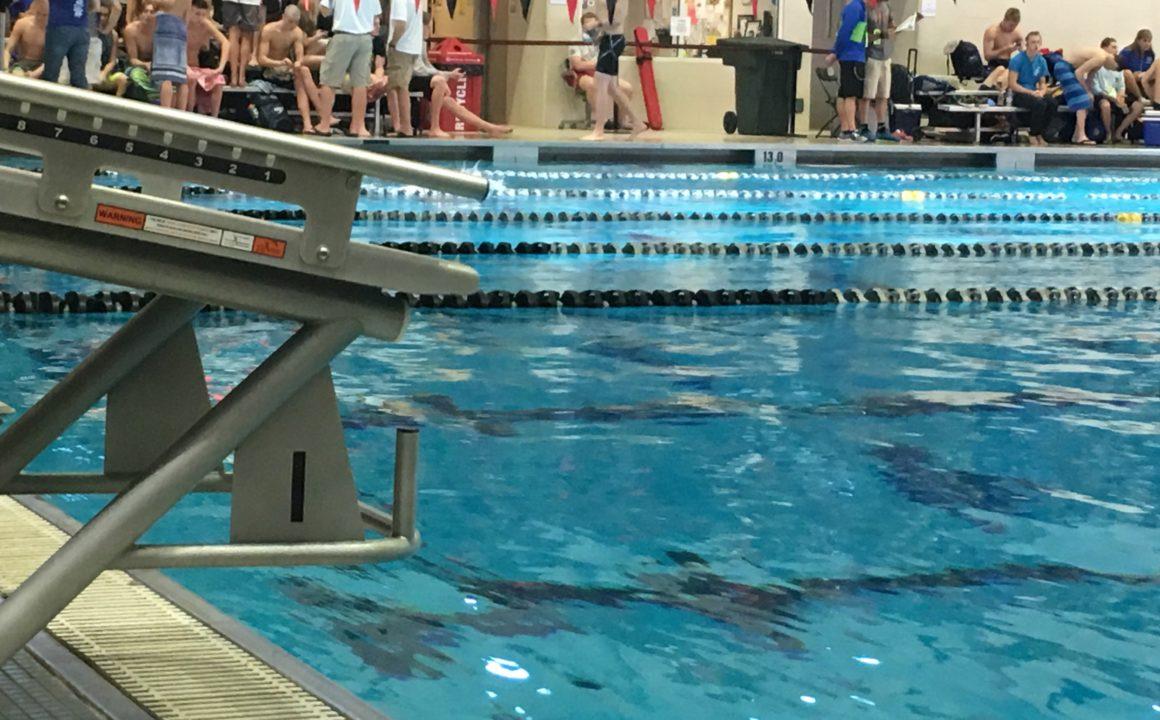 The groundwork has been laid out for an incredibly tight team race at the 80th MSHSAA Boys Championship in St. Peters, Missouri. Current photo via Shawn Klosterman

The preliminaries of the 2016 MSHSAA Championship got exciting right out of the gates as the Tigers from Cape Girardeau Central blew the doors off of the St Peters Rec-Plex by slicing nearly two seconds from the MSHSAA Record they set at this meet last year in the 200 medley relay.  The Tigers had already been under the mark once this season at the COMO Invitational, but the 1:33.25 turned in today by the team of Jacob Bening, Sam Hahs, Brogan Davis and Reagan Ragsdale set them even further apart from any other competitors in Missouri history as they are still the only team to have ever swam below 1:35. They will go into tomorrow’s final with well over a two second gap between them and Columbia Rockbridge at 1:35.69.

Both Cape Central and Rockbridge are going to be in a tight race for the team title, with Blue Springs South, Kirkwood and Kearney also in the hunt after showing tremendous depth in the prelims.  Of those teams in contention, in the eighty years of MSHSAA boys swimming, Rockbridge has taken the title once in 2015, and Kirkwood has three times with the most recent being 1972.  Bringing home the top trophy would be historic for all programs involved.

The only team managing to land at least one potential scorer into a final for every swimming event was Cape Central. Bening, Ragsdale and Davis will all be in two A-finals each, with Ragsdale the top seed in the 100 free at 46.70.  Cape is also the top seed in the 400 freestyle relay (3:09.82) to go along with their medley. Rockbridge was the only team able to land a squad in the A-final for all three relay events, with all three seeded in the top four places for tomorrow’s session.  They also returned at least one individual scorer in every event but the 50 freestyle, with Dane Florea and Zach Lorson each returning for two A-final positions.

The Blue Springs South team of Nick Keller, Kyle Hepting, Ben Morgan and Jake Workman owns the top seed for the 200 free relay with 1:26.86. While all four of them were able to make at least one A-final individually, Hepting landed in two with his 3rd seed in the 100 and 8th seed in the 50 free.  The Jaguars are the wild card for tomorrow’s final as they have qualified the maximum four divers, which could be an ace up their sleeve.

Kearney made their presence known early in the session when right after earning the 3rd seed for finals in the 200 medley relay, they also earned the top two positions in finals for the 200 freestyle with a 1:41.72 from Austin Wolfe and a 1:42.13 from Evan Holt.  Wolfe will also be second seed in the 100 free while Holt is second seed for the 500 free.  Kearney also earned the second place seed for tomorrow’s final in the 400 free relay.  Kirkwood put themselves into the fray earning the fourth place seed in the 200 medley and third seed in the 400 free relay.  They are led by Jack Wever, who turned in the top time in the 100 back (50.16) and holds the third seed in the 200 IM (1:52.12.)

Diving finals will begin at 9am, and swimming finals start at 3pm Saturday.  Keep checking in at SwimSwam for more coverage.