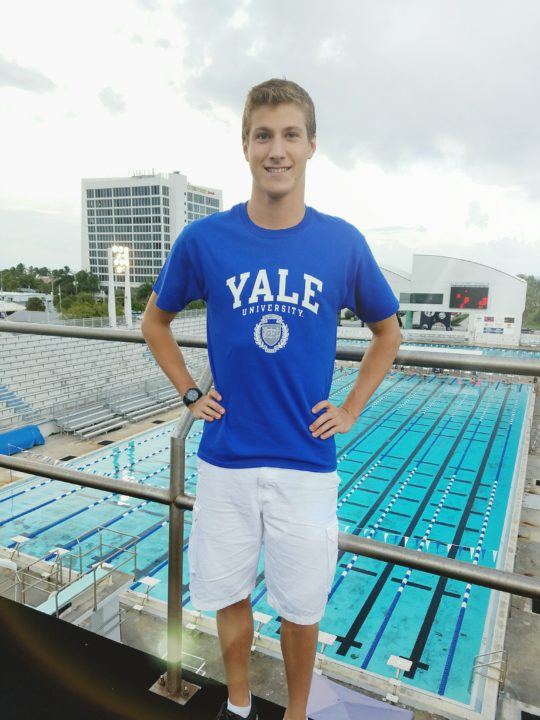 Philippe Marcoux, a dual citizen (USA/Canada) who lives in Fort Lauderdale, Florida, has committed to swim for Yale University in the fall of 2017. Current photo via Philippe Marcoux

Philippe Marcoux, a dual citizen (USA/Canada) who lives in Fort Lauderdale, Florida, has committed to swim for Yale University in the fall of 2017. Marcoux was recently admitted into Yale’s class of 2021.

Born in Québec, Canada, Marcoux began his swimming career 10 years ago in Hawaii. He is now a senior at Fort Lauderdale High School, and swims year-round with Swim Fort Lauderdale. Marcoux won both the 50 free and 100 free for FLHS at the 2016 Florida 3A State Championships in November. He notched a personal best in the 50 in prelims (20.64) before winning the state title with 20.70. He then went on to win the 100 with a PB of 44.61. Marcoux also led off both Fort Lauderdale’s freestyle relays and helped the Flying L’s finish in sixth place overall.

Marcoux competed at the Canadian Olympic Swimming Trials in April of last year in Toronto. He placed 40th in the 50m free with a best time of 23.88, although he lowered that time at Atlanta Futures in August. His top events include: