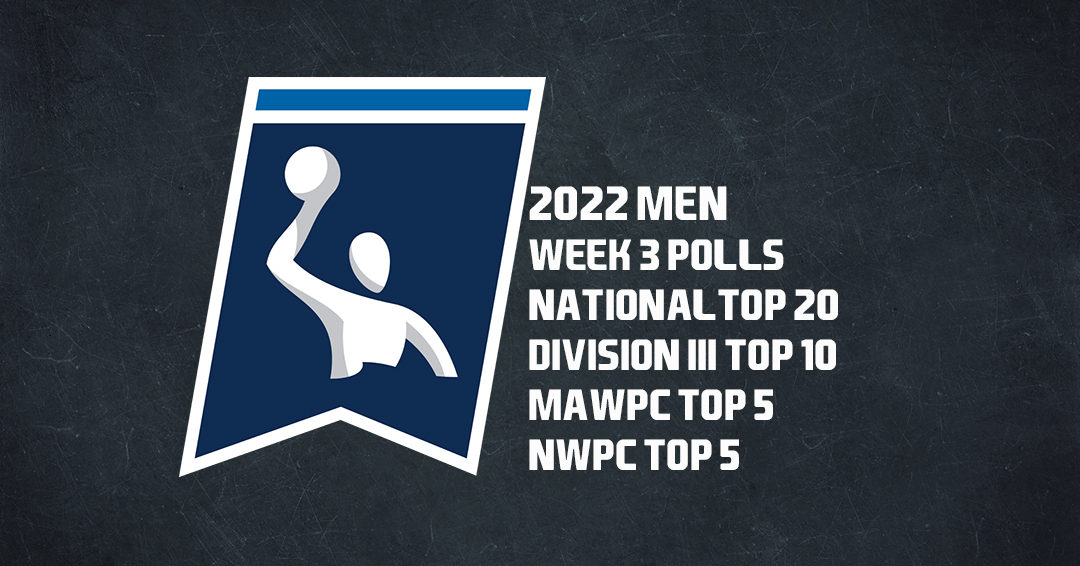 California, which topped the University of Southern California by a 13-12 score to claim the 2021 NCAA crown, and Pomona-Pitzer, which claimed a 13-12 overtime decision over Claremont-Mudd-Scripps Colleges for the 2021 USA Water Polo Division III Championship, hold top billing in the National Top 20 and Division III Top 10 Polls through the first three weeks of the 2022 NCAA season.

The University of California remains the top-ranked team in the nation as the 2021 National Collegiate Athletic Association (NCAA) Champion Golden Bears stay at No. 1 in the Week 3/September 21 National Men’s Varsity Top 20 Poll.

California (100 points) continues as a unanimous No. 1 selection to lead a Top 20 which experiences the first major changes of the season.

San Jose State University (53 points) moves up one spot to No. 9, while Loyola Marymount University (49 points) roars into the Top 10 after ranking at No. 15 last week.

The final position belongs to George Washington University (7 points) which cracks the Top 20 for the first time this season.

The University of Redlands (72 points) rises to No. 6 with the University of La Verne (71 points) and Whittier College (66 points) backing up to No. 7 and 8, respectively.

Chapman University (50 points) remains at No. 9 and Augustana College (38 points) breaks into the Top 10 by claiming the final spot.

Fordham University continues at No. 1 in the Week 3/September 21 voting Mid-Atlantic Water Polo Conference (MAWPC) Top Five Poll. The Rams (97 points) are the lone team in the Top Five to retain its ranking from the Week 2/September 14 voting.

George Washington University (95 points) and the United States Naval Academy (93 points) exchange the No. 2 and 3 positions, while Bucknell University (85 points) and Wagner College (48 points) switch at No. 4 and 5.