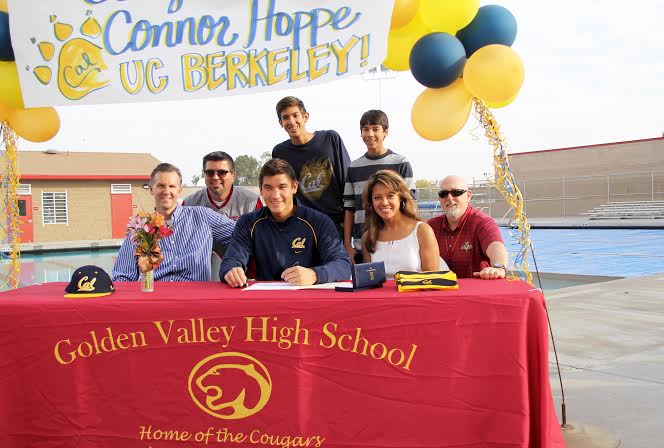 Connor Hoppe (above) is one of 10 men to have signed National Letters of Intent to swim for Dave Durden and Cal in the early signing period.

The Cal men’s team has announced their full recruiting class for seniors who will graduate high school next spring, and there are few surprises on the swimming side. The new piece of information coming out of this release is the addition of Finn Scribbick from San Antonio to the class.

Scribbick is the defending Texas 4A State Champion (smaller schools) on the 1-meter springboard, and was 8th on the 1-meter at the 2013 USA Diving Junior National Championship meet. He also placed 17th on the 3-meter and 14th on the platform at that event. Cal has shown the ability to produce great divers even without the world’s best diving facility (they have to train on Stanford’s platforms), but with a new facility, complete with their own towers, on the horizon, their recruiting in that area could get even better.

Kyle Coan is a freestyler/butterflyer from Rancho Cucamonga, Calif., and a member of Redlands Swim Team. At Los Osos High School, Coan is a six-time CIF Southern Section champion (including 200 free in 2012 and 2013 and 100 fly in 2013) and a nine-time NISCA All-American. He is considered one of the top 200-yard freestylers in the class of 2014, with a best of 1:35.69. Coan is a former national age group record-holder (15-16) in the 200 free relay and was named the 2013 Inland Valley Swimmer of the Year as well.

A teammate of Coan’s on the Redlands Swim Team, Kyle Gornay comes to Cal from Yucaipa, Calif. and Redlands High School. He is a freestyler/backstroker/butterflyer who holds numerous southern California swimming records and the national age group record for 15-16 years-olds in the 200 yard freestyle with a time of 1:34.99. Gornay was a member of the National Junior Team that traveled to Dubai last summer to compete at the Junior World Championships.

A 2012 Olympic Trials qualifier, Ryan Kao comes to Cal from the La Mirada Armada club team and Kennedy High School in Southeastern Los Angeles. He is a five-time CIF champion and a three-time Empire League MVP. Kao is a top-tier 500 freestyler in the class of 2014 with a best time of 4:20.28.

From Vallejo, Calif. and a member of the Terrapins Swim Team, Justin Lynch is a talented butterflyer and freestyler who last summer at the World Championship Trials in Indianapolis set the 15-16 year-old U.S. national age-group record in the 100-meter fly with a time of 52.75. Lynch’s mark topped legend Michael Phelps’ 2001 age-group mark of 52.98 that had stood for 12 years, winning the consolation finals of the 100 fly. He is a member of the National Junior Team that competed at the 2013 World Championships in Dubai, winning a bronze medal in the 100 fly. Lynch won a gold medal in the 100 fly and a silver medal in the 200 fly at the 2013 Junior Nationals as well.

Nick Silverthorn is a freestyler/breaststroker/IMer from Livermore, Calif. who attends Granada High School and is a member of the Pleasanton Seahawks. He currently holds three national age group records and at the 2013 North Coast Section meet, Silverthorn placed third in the 100 breast while racing under the existing high school national record. His time of 53.61 in the 100 breast ranks as the third-fastest all-time high school mark.

Zach Stevens is a top breaststroker/IMer from Arroyo Grande High School and is a member of Puma Aquatics. He won the 100 breast at the CIF Southern Section Division II championships as a junior with a time of 55.13. Stevens also competed in the U.S. Olympic trials in the 100-meter and 200-meter breaststroke as a 16-year-old in 2012 and was a 2013 High School All-American.

Hailing from Woodland, Calif., Matt Whittle is a breaststroker/butterflyer/IMer from Davis Senior High School and the Davis Aquadarts. He has bests of 55.29 in the 100 breast and 1:59.09 in the 200 breast.  Whittle also shows his versatility in the 200 IM and the 100 fly with bests of 1:48.69 and 48.26, respectively. He is a long-time Cal fan and traveled to Minneapolis to watch the Bears capture the first of their back-to-back national titles in 2011.

Cal’s diving letter of intent signee is Finn Scribbick from San Antonio, Texas and Alamo Heights High School. He is also a member of the San Antonio Divers club team. Scibbick is a three-time Texas High School State Champion (4A) and placed eighth on the one-meter board (505.90) at the 2013 USA Diving Junior National Championships. He also captured the bronze medal at the 2013 Pan Am meet in the three-meter synchronized diving competition.

“The great thing about this class of athletes coming in is that we addressed everything – from the freestyle 50 to the mile, the breaststroke events, the backstroke and butterfly, to our relays,” said Durden. “We even improved our team on the boards with Finn Scribbick, a high-quality diver. It is a great group that could be considered as one of the top recruiting classes in the nation.”

“I look forward to training with some of the best swimmers in the country, said Coan. “And, I am excited to learn from coaches Dave Durden and Yuri Suguiyama.”

“I’m extremely excited to start training with, in my opinion, one of the greatest freshman classes coming to Cal,” said Gornay. “Having this many athletes who have competed at the same level will sure make training fun. In addition, seeing what we can do as a team in the future makes me thrilled to be a part of this strong and diverse team.”

“I’m excited to be a Cal Bear and can’t wait to work with Dave (Durden), Yuri (Suguiyama) and the rest of the team,” said Green.

“Cal honestly was the best fit for me,” said Hoppe.  “The team, coaches, and the atmosphere all contribute to the amazing program that I am so glad and humbled to be a part of.  The future cannot come soon enough.”

“Cal is the best fit for me to excel, both in the pool and in the classroom,” said Kao. “I am looking forward to working with coaches Dave Durden and Yuri Suguiyama and hope to make an impact at championship meets.”

“I joined the Cal program because I wanted to step out of my comfort zone,” said Lynch.

“I am excited to be attending Cal, it is a great opportunity for me,” said Scribbick. “I am really looking forward to practicing at the new facility, plus Todd (Mulzet) is a great coach who I have known since I was 10.”

“After my official visit to Cal I knew it was a great place for me,” said Silverthorn. “I was really impressed with how organized Dave (Durden) and Yuri (Suguiyama) were. They are the type of people who will help every member of the team, in and out of the pool. I could see myself reaching my full potential as a swimmer at Cal, and having a great supportive team around me will make it an even better experience.”

“I’m looking forward to the next four years as a Golden Bear with a great team and an outstanding education,” said Stevens.

“I chose Cal for many reasons,” said Whittle. “The first is Cal has been my dream school ever since my family had been taking me to dual meets and football games back in the glory days of Aaron Rodgers, Marshawn Lynch and DeSean Jackson. I really understood the importance of a Cal degree and how it could help me out when I hang up the suit and goggles.

“I am very excited to be joining the team now. This is clearly a team that could win multiple NCAA championships while I am at Cal. Dave (Durden) and Yuri (Suguiyama) have made a huge impression on me and already I feel like our relationship is great. On my recruiting trip the guys made me feel like I was a part of the team just from that one weekend, which I value. Even though I was considering going out of state, Cal is close enough to home so my parents could still be a part of my swimming.”

Really glad we picked up a diver as well. Hopefully it’s a beginning of a new era for cal diving. So excited for this freshmen class.

That Texas diver was a badly needed addition and huge win for Cal! With the exception of Connor Green and Finn all other recruits are from California. Still lots of talent there.