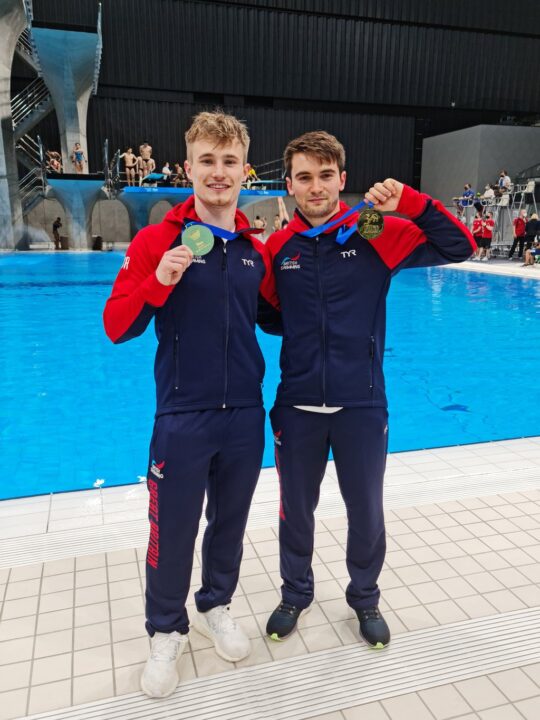 Eight more Olympic quota spots in synchronized diving events were awarded on Sunday in Tokyo in the men’s 3-meter and women’s 10-meter, with the usual suspects taking home the spoils.

Three Olympic qualification spots in each synchronized diving event were handed out to the medalists at the 2019 World Aquatics Championships, while Japan gets an automatic host nation entry in each event. Qualification spots are not awarded to athletes, but to countries – with those countries responsible for delegating the spots to individuals.

With no Chinese or American teams competing in the event, the Canadian duo of Caeli McKay and Meghan Benefeito snuck through with a win in the women’s 10-meter event. That same pair finished 4th at the World Championships.

The duo’s overall score of 305.94 was a good one, and while they had some highlight dives, they continue to struggle with the execution of their 407C dive, an inward 4 1/2 somersaults tuck. That was a challenging dive for them at Worlds too, and could be the difference maker between a medal, and not, in Tokyo this summer.

They and the runners-up from Great Britain’s young duo of Lois Toulson and Eden Cheng cleared themselves from the field on Sunday, and both teams earned Olympic qualifications. Germany, who were 3rd on Sunday, also picked up an Olympic qualification. Tina Punzel and Christina Wassen placed just 12th at the World Championships in this event, out of 14 teams, but improved dramatically on Sunday to secure an Olympic berth. They had an identical dive lineup to their Worlds schedule, and improved their score on every single dive for an overall 34-point bump.

In Saturday’s other event, the men’s 3-meter synchro, the Brits continued with the hot hand. Again, without Chinese participation (there are a few Chinese divers present, but not many), Jack Laugher and Daniel Goodfellow took the World Cup title. That makes for 3 victories in 4 events so far for Great Britain.

Those two finished 2nd at last year’s Worlds and so, along with gold medalists China and bronze medalists Mexico, were already qualified for the Olympics.

The top-finishing new qualifiers were veteran German pair Patrick Hausding and Lars Rudiger, who finished in 2nd place about 7 points behind the Brits. Those two were 4th at the World Championships, so the qualification was fitting and not-unexpected.

For Hausding, who was already qualified in the 3-meter, this will be a third Olympic berth.

It has been a disappointing week so far for Russia, but Nikita Shleikher and Evgenii Kuznetsov came through with a 3rd-place finish to secure their Olympic qualification.

The American pair of Andrew Capobianco and Michael Hixon placed 4th on 3-meter to lock up a 9th quota spot for the Americans out of a possible 12. Capobianco, the two-time defending NCAA 3-meter champion, and Hixon outdid their platform counterparts who on Saturday missed a qualification – the only mandated gap in the U.S. Olympic entries so far.

Italy’s Lorenzo Marsaglia and Giovanni Tocci, who finished just 17th at the World Championships, performed almost 100 points better on Sunday to finish 5th overall and lock up the final Olympic qualifying spot. With a revamped dive lineup, including a 109C that has a huge 3.8 degree of difficulty, replacing one of their worst-performed dives at Worlds, the two have made some big changes and seen results.

Really feeling for the Australian divers this week (they had to withdraw from this competition).

So they cannot qualify?

i bet jack laugher is a hoot. cuz his last name is laugher (like laughing) lol lmao rofl

So, glad to read that Capobianco and Hixon earned a TEAM USA spot. They did a lovely job in the 3-meter synchro; just hope they do make to Tokyo!