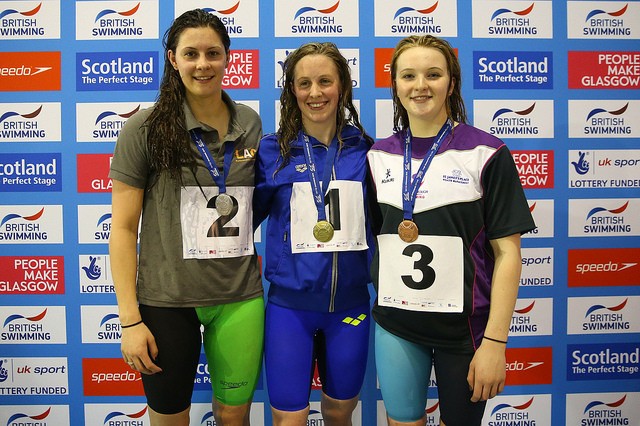 Abbie Wood (right) placed 3rd at the British Championships in the 400 IM behind Hannah Miley (center) and Aimee Willmott (left), which earned her a chance to race at both the European Junior Championships and the senior European Championships this summer. Archive photo via Scottish Swimming

Great Britain has announced a team of 26 swimmer that will participate in the 2016 European Junior Championships in July, mirroring the 26 selected to compete at the 2016 Summer Olympics in Rio earlier this month.

“This will be the largest team we have taken to these Championships in recent years, and it is littered with quality and experience,” said  British Swimming Head of Performance Pathway Tim Jones. “The change in female age groups this year will see a number of past gold medal winners, including Holly Hibbott and Abbie Wood, compete for the third year in succession, and this will provide invaluable experience to the team.”

Jones is referencing the fact that this year, LEN, the governing body for aquatics in Europe, has expanded the age ranges to four-year spreads instead of two, with boys eligible from age 15-18 (based on December 31st of that year), and girls eligible from age 14-17.

Britain placed 2nd in the final medals tally at the 2015 European Junior Championships, which were technically held in conjunction with the European Games. They grabbed 23 total medals, including 7 golds, including a 100-200 freestyle double from Duncan Scott, who at 18 this year qualified for the Olympic Team.

“We always judge the success of our junior programme on the number of athletes who manage to successfully convert to the senior ranks, so we take great pride in seeing Duncan Scott, Georgia Coates and Cameron Kurle recently named in the Rio Olympic Team,” said Jones. “We hope and fully expect to see some of this latest crop of 26 swimmers push for their own Olympic selection in Tokyo in four years’ time, and this summer will provides a great opportunity to continue their journey.”

Holly Hibbott, the defending champion in the 800 free, will return to defend her title in the event.

The 2016 European Junior Championships will take place from July 6th-10th in Hodmezovasarhely, Hungary.

The European Junior Championships take place in Hodmezovasarhely, Hungary from 6 to 10 July 2016. The British roster comprises: