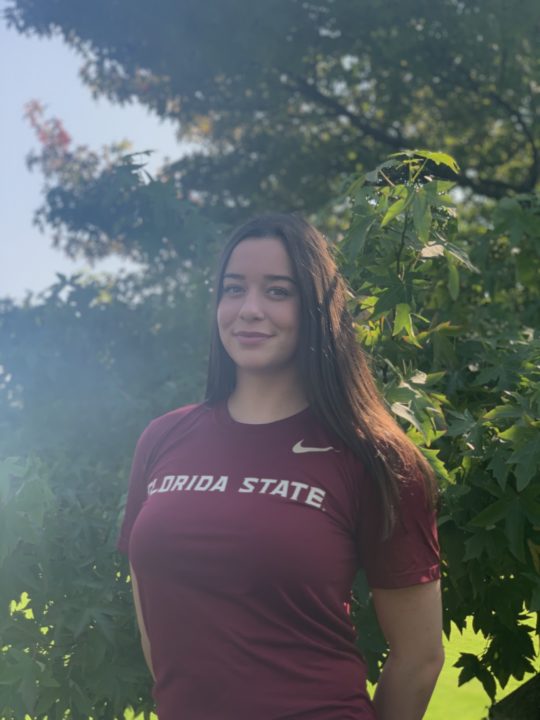 Elena Dewhurst, one of Great Britain's top junior sprinters, has committed to the Florida State Seminoles for the fall of 2021.

Elena Dewhurst, who currently attends and trains at Mount Kelly College in Tavistock, England, has verbally committed to swim for the Florida State Seminoles. She is scheduled to matriculate to the program in the fall of 2021.

I am really excited to announce my verbal commitment to swim and study at Florida State University. I am thrilled to be a part of this amazing program with their incredible coaches and I would like to thank everyone who has supported me to get to this point. GO NOLES !!

Dewhurst grew up training with the small London-based club Anaconda, beginning at 9 years old. There she trained to become a British age group group champion in the 50 free in 2017 and 2018 before moving on to Mount Kelly College to continue training and study A levels, which are the equivalent of AP classes or advanced high school classes in the United States. Dewhurst is currently 17-years old.

Dewhurst, who is a British Olympic Trials qualifier in the 50 free, is primarily a sprinter – and a fairly pure one at that. That 50 free is easily her best event, though she has solid 100 freestyle times as well.

She finished 13th at the 2019 British Championships in the event, and overall finished ranked 36th nationally among all ages season-wide in the event that year.

Dewhurst does have a little bit of international experience, swimming at a French Golden Tour Meet and the Flanders Swimming Cup in Belgium in 2018.

As a sprinter, she’ll fit in well with where the Seminoles have performed well since Neal Studd took over the program. On the women’s side, the team’s 200 free relay finished 6th at last year’s ACC Championship meet, which was the team’s best relay finish. That relay came with four underclassmen in the squad as well. The Seminole men are among the best sprint free groups in the country, winning the ACC title in the 200 free relay last season.

The Florida State women placed 7th overall at the meet.

She’ll need to do a lot of improving to score points in the ACC.

Just trying to understand where all these recruits are going to swim when they arrive on campus? Isn’t FSU’s roster already in the 80’s, maybe even 90’s?
You only get to send 18 to ACC’s, so over half their roster ends their season at a dual meet?

This year they have 36 women and 36 men on their roster, including swimmers and divers. Each team can send up to 18 swimmers and 3 divers to the meet as scorers for each gender, so that’s 42/72. More than half the roster goes to ACCs. NC State has 37 women and 38 men on it this year. The Virginia roster is smaller. Louisville is 29 and 31, so also smalller. But, Florida State’s roster isn’t ridiculously huge. Not even the biggest in the conference, let alone the country. Remember that, while coaches certainly have some say in roster size, the administration also often has input in that. Programs like swimming & diving (and cross country, for example) are a… Read more »

Fsu is very poorly managed. Their coaching staff will be different soon if they wish to have a good reputation.