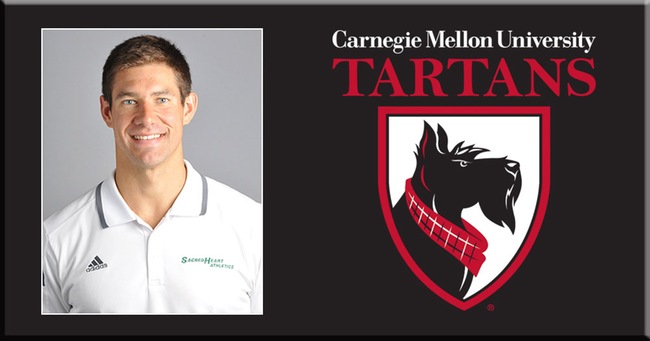 Carnegie Mellon University head coach Matt Kinney has announced Brendan Heller as the next full-time assistant coach for both the men's and women's programs. Current photo via Carnegie Mellon Athletics

A former Division I swimmer at Bryant University in Smithfield, R.I., Heller has been involved in the swimming coaching community since 2014. His coaching start came at Rye YMCA in Rye, N.Y., where he worked with the senior team. Heller was also employed by Pace University as an assistant swim coach for a year and at Iona Preparatory School as the varsity head coach for two years where he was named the NY CHSAA Division II Coach of the Year.

“Brendan brings a wealth of experiences from club, high school and college aquatics and an extreme passion for working with all levels of swimmers and divers,” said Kinney. “He will add a variety of strengths in coaching, teaching, leadership and recruiting to the program, and we can’t wait to get him here in the fall.”

Most recently, Heller served dual roles at Manhattan College as a volunteer assistant coach for the fall semester and at Sacred Heart Greenwich where he was the head swim coach, assistant water polo coach, and athletic operations manager since 2016.

An Army Reserve Officer Training Corps (ROTC) Distinguished Graduate at Bryant, Heller served in the Rhode Island Army National Guard from December 2010 through January 2017, finishing his time in the Army as a First Lieutenant.

Heller also earned his graduate certificate in sports management with a concentration in sports leadership from Lasell College in 2016 and is pursuing his master’s in education, specifically coaching education and athlete development, from Xavier University.