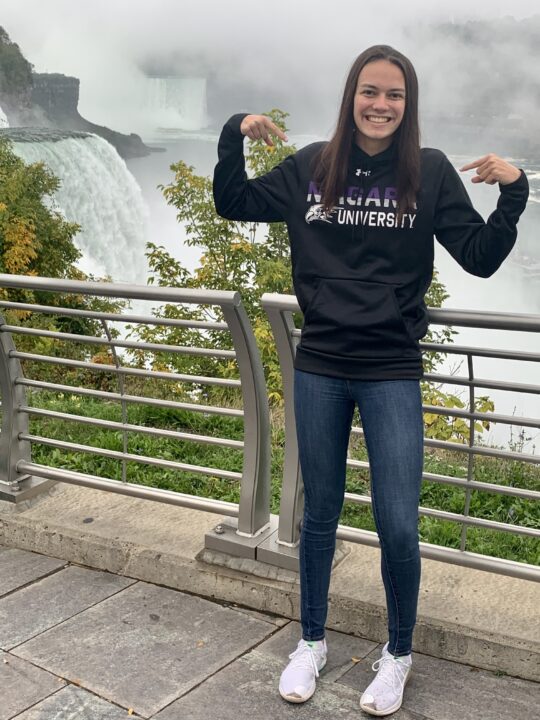 Brauer is a athlete representative for the Missouri Valley LSC. She will arrive on campus at Niagara in fall 2022 as a member of the class of 2026. Current photo via Anna Brauer

Anna Brauer from Harrisonville, Missouri has announced her commitment to swim and study at Niagara University beginning in the 2022-2023 school year.

“I am overwhelmingly excited and proud to announce my verbal commitment to continue my athletic and academic career at Niagara University!!  I would like to thank my coaches, friends, family, and team for supporting me along the way.  Can’t wait to see what’s next as a purple eagle! ”

Brauer swims for COOL Swim Team out of Overland Park, Kansas. She also is an athlete representative for the Missouri Valley USA Swimming LSC.  Over the summer, Brauer earned a best time in the long course 200 breaststroke at the Missouri Valley Championships as she swam a time of 2:57.39. Summer of 2021 was also the first summer she broke 3:00 in the 200 breaststroke as her previous best time was a 3:04.61 from 2019.

She continued her success in the 200 breaststroke into the fall short course season as she earned a best time in the event SCY in October 2021. She swam to a time of 2:33.29 at the South Dakota Riptide Arena Open.

Niagara University is a private university located in Lewiston, New York. The team is a member of the Metro Atlantic Athletic Conference (MAAC). Head coach Eric Bugby is in his second season with the team.

The Purple Eagles are a program that has made great strides recently. This season, the men’s and women’s programs earned a total of 19 new school records at the Zippy Invitational in November 2021.

Brauer will arrive on campus next fall as a member of the class of 2026 along with Avery King, Ania Bodyl, Chloe Vlaeminck, Madelyn Hudson, Anessa Hanson, and Rachel Gardner.