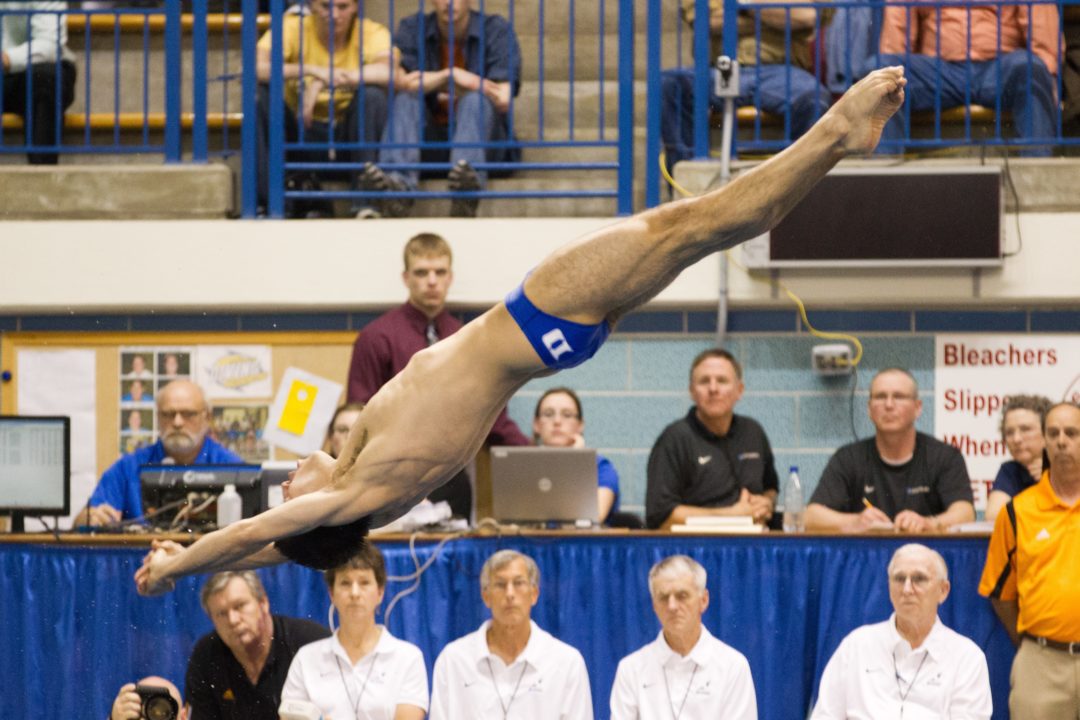 The first 4 spots on the American Olympic diving team were awarded Thursday night, with the men’s synchronized platform and the women’s synchronized 3-meter finals going in the books. This year is a whole different ball-game, with the Trials being televised for the first time to a nationwide audience, so the pressure is ramped up big-time. Not coincidentally, it’s the athletes who have felt the pressure before at televised NCAA Championships who stepped-up the biggest for the first roster spots.

In the women’s competition, Kecli Bryant and Abby Johnston both locked up their bids, but it was by no-means a sure-thing. The pair held a slim lead over Christina Loukas and Kassidy Cook of 6 points headed into the finals, and with scores carrying over there was no margin for error. Cook and Loukas were the better pair on the final day of competition, chipping away at their opponents’ lead dive-by-dive in the 5-round finals.

But Bryant and Johnston had the advantage of that lead, and needed every bit of it. The final margin was 956.40-955.98, which is exactly .42 points. That means that a half-point different score by a single judge on a single dive would have shifted the Olympians.

As it is, the former NCAA superstar Bryant and Johnston will be punching their tickets to London. This will be Johnston’s first games, and for Bryant, a multiple NCAA Champion on the springboards, it will be a return trip in this event with a new partner – she and Ariel Rittenhouse were 4th in this event in Bejing. Rittenhouse wasn’t in this final.

Amanda Burke and Summer Allman, the veterans of the group, were 3rd about 150 points behind.

The men’s platform competition was a whole-different story than the women’s. There was a clear favorite duo, the two best in the United States, and two men that have had epic head-to-head battles but are now competing in collaboration: David Boudia and Nick McCrory. The pair, representing the same Duke Aquatics Diving club that the 3-meter winners compete for, held a 180-point lead when all was said-and-done, with a final score of 1387.86. That included a final-round number of 468 – a huge score that would put them in contention for gold if it held-up in London.

Their lone stumble was on their 2nd dive in the finals, a back dive pike, where despite receiving a 10 from a single judge, the majority were less impressed and handed out several 8.5’s and even an 8 for a round score of only 52.20.

But it is not the required low-difficulty dives that make the difference at an Olympics. It is the challenging dives instead that separate, and that’s where these two are so good. On their next dive, an Inward 3 1/2 Somersault Tuck (with a degree of difficulty of 3.2), they racked up multiple 10’s and nothing lower than a 9 to get back into the groove.

Like Bryant, Boudia will be returning for a second-straight Olympics in this event. In 2008, he and Thomas Finchum placed 5th in Beijing. Finchum, like Rittenhouse, chose not to dive synchro this year (even though he and Drew Livingston were the 2011 National Champions in this event) to instead focus on his individual events. He currently sits 3rd behind Boudia and McCrory after the 10-meter semi-finals.

Behind the winners was the young combination of 20-year old Toby Stanley and 16-year old phenom Steele Johnson with a score of 1207.08. Johnson, out of Carmel, Indiana, is a big name to watch on the American diving scene – he actually placed 2nd and 3rd in this event, teaming up with another Indianan Dashiell Enos for 3rd at 1170.12.

The next spots will be given out on Friday in the men’s synchronized 3-meter final.

I would really enjoy to see some American gets some medals in divining. Lets go USA