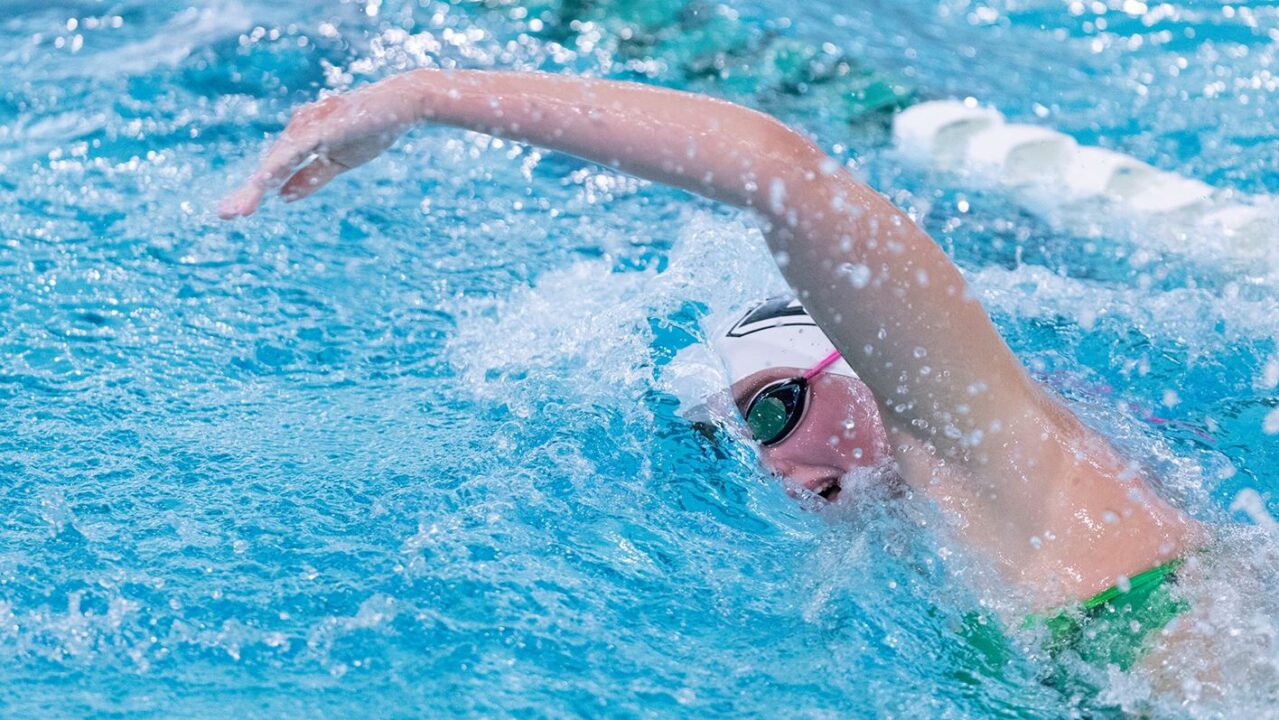 The Bearcat men defeated the Golden Griffs 199-89 while the women's team was victorious by a 192-108 margin. Current photo via Jonathan Cohen

VESTAL, N.Y. – Freshman Elijah Lanfear won three events and senior Christopher Egan met the qualifying standard for the NCAA Zone Meet, highlighting Binghamton’s sweep of Canisius in a swimming & diving dual meet on Saturday afternoon at the Saunders Aquatic Center. The Bearcat men defeated the Golden Griffs 199-89 while the women’s team was victorious by a 192-108 margin.

“We swam well and competed well today,” head coach Jerry Cummiskey said. “We’ve seen the men and women continue to turn a corner and get better week in and week out, which was definitely our goal this fall. We are definitely happy with where we are and excited about what the next few weeks will bring.”

Lanfear won three events for the second time this season, having also done such against Niagara on Oct. 9. Against Canisius on Saturday, he won the 50 free (21.41), the 100 free (46.96) and the 100 fly (49.98). Lanfear was also on the first-place 200 medley relay team which included fellow freshman Keegan Chatham, sophomore Xiaoyu Lin and junior Justin Meyn.

As for Egan, he swept the men’s diving events with scores of 306.83 in the one-meter competition and 287.70 in the three-meter event. His one-meter score met the NCAA Zone qualifying standard of 300.00 – a mark he also met in the meet against Niagara.

The Bearcats also won the men’s 200 free relay with a time of 1:25.85. That quartet featured Meyn, sophomores Robert Reining and Liam Murphy and senior Benjamin Beldner.

Senior Amanda McGraw swept the diving events for the second time this season. Her scores were 260.10 for the one-meter event and 267.83 for the three-meter competition. McGraw also recorded the sweep in the women’s meet against Niagara and Siena on Oct. 9.

The Bearcats return to action against Iona next Saturday at the Saunders Aquatic Center at 1 p.m.

The Canisius men’s and women’s swimming and diving teams fell on the road at Binghamton Saturday afternoon in Vestal, N.Y.
The men’s team suffered a 199-89 defeat, while the women lost by a 192-108 margin.
The women’s team was led by graduate student Sage Pollack and freshman Noriah Cook. Pollack earned first-place finishes in both the 50 (24.12) and 100-free (53.47) events for the fourth consecutive meet this year. The New City, N.Y., native also placed first in the 200 free (1:40.97) and 200 medley relays (1:50.22).
Cook was the first to touch the wall in the 100 (58.64) and 200-back (2:09.96). The freshman was also part of the second place 200 medley relay, along with juniors Isabel Sapio and Grace Van Buren.
Senior Liam O’Connell garnered the top spot in all three of his solo events against the Bearcats on the men’s side. O’Connell finished first in the 200 (1:43.53), 500 (4:41.30) and 1000 (9:41.08) free solo events. The senior also claimed third place in the 200 free relay with a time of 1:27.71.
Freshman Archie Minto sat atop the 200 fly for the fourth straight meet to begin his collegiate career, completing the event in 1:53.41.
Up Next• Canisius returns to the pool Saturday, closing out the calendar year with a meet against Little Three rival St. Bonaventure. The meet is slated to begin at 1:30 p.m. from the Burt Flickinger Center in downtown Buffalo.
For complete coverage of Canisius swimming and diving, please follow @griffs_swim on Instagram and @GriffsSwim on Twitter.