Mario, Sonic the Hedgehog, U.S. Olympic Trials and the GOAT, Michael Phelps, highlight this edition of Beyond the Lane Lines Archive photo via Tim Binning/TheSwimPictures.com 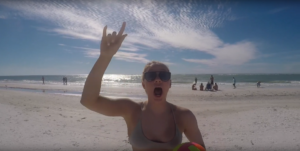 American Michael Phelps, the most decorated Olympian of all-time, is retired from the sport and enjoying his life as a father to Boomer and Beckett, with a 3rd child on the way. But the 23-time Olympic gold medalist who resides in Arizona makes regular public appearances, including on the mound at a recent Arizona Diamondbacks Major League Baseball game.

Throwing out the first pitch, Phelps’s long-armed warm-up couldn’t prevent his toss from coming in a little on the high side, but it made it over the plate nonetheless.

As part of the Diamondbacks’ Swim Night raising awareness for drowning prevention, Phelps stuck around for an exclusive Q&A session for VIP ticket holders. The GOAT threw out the first pitch at this same Drowning Awareness night last year.

Swim England and UK Deaf Sport are continuing to make strides in leveling the playing field for deaf swimmers in the nation. As part of an ongoing project, an unprecedented number of facilities in England which host level-one and level-two meets have been equipped with strobe lighting to ensure deaf swimmers have equal starts to their peers.

George Wood, Swim England’s Sport Development Director, said: “I am delighted that this project is pushing forward and we now have more facilities that host level-one/two meets able to provide equal starts for deaf swimmers. This will help to further improve the experience for athletes in swimming and keep the sport at the forefront of inclusive sport. We are grateful for the support provided by UK Deaf Sport.”

Gaming company Sega announced a new game this week entitled Mario & Sonic at the Olympic Games Tokyo 2020, whose premise is taking players back in time to the previous Games in which Tokyo played host back in 1964.

8-and 16-bit versions of Nintendo and Sega characters play Olympic sports in 2D, including track and field events, diving and gymnastics. An additional 21 events will be developed in 3D, including the four new Summer Olympic Games sports events of sport climbing, surfing, skateboarding, and kumite.

Mario & Sonic at the Olympic Games Tokyo 2020 will be released Nov. 5 exclusively on Nintendo Switch.

The Omaha Herald reports that tickets for the 2020 U.S. Olympic Swimming Trials are selling at a record-setting pace, with the lower bowl of the CHI Health Center already sold out for all 8 days. The competition is set for June 21st -28th, with sales ahead of 2016’s pace, with all 15 sessions selling out at that year’s edition of the competition.

Sports Commission officials also said that more than 80 percent of the all-session tickets sold have been purchased by those living outside the Omaha metro area.

“The best of the best from across the country have their sights set on Omaha, and positions on the U.S. Olympic team will be on the line every day,” USA Swimming Cheif Operating Office Mike Unger said. “The new four-day packages offer a tremendous way to experience what will no doubt be an incredibly memorable event.”

No hate on Phelps but, this man can swim may like a fish but pitches the ball like hes playing a game of catch😂

Better than Obama too. Most celebs don’t bring the heat on the first pitch. GW did alright though.

If were you would you fire a strike or just toss a pitch?

Toss a pitch is the only correct answer if you’re a celebrity, AKA someone with something to lose if you embarrass yourself.

You’re coming out cold…I think people underestimate how hard it is to rocket a pitch anywhere near a catcher from 55 feet away. If you’re on the mound…fuggetaboutit.

If it was me? Honestly? I’d start practicing 8 weeks out, go out there and throw 3 days/week, and make sure I’m really warmed up and ready to go.

That’s the way it’s supposed to be thrown out.

In a recent NYT interview, Phelps said he texted Bowman after Dressel broke his 100 fly record. “I swear to God, if my 400 I.M. record gets broken, I’ll meet you in Colorado Springs for training.”

Well there don’t seem to be any contenders for that

Let it go, Michael, let it go. Last time you swam the 400 IM you had the “WTF just happened” look in your interview on your 4th place finish.

I think he’s safe for now. No one is close. Lochte at his peak was about 1.3s off if I remember right, which IMO would probably be really close if adjusted for suits (2009 LZR legs vs. 2012 LZR). Also, he would have been closer if he hadn’t swum the first 300 like a madman. Going 4:05.2 with that race strategy is insanely impressive. Kalisz is a much more strategic and sensible swimmer, but I don’t know if he has the same raw ability across all four strokes. Hagino’s Rio swim was probably near his absolute peak. Same with Seto this past summer. Hopefully someone proves me wrong, but I think we’ll only see tiny, incremental drops (if at all)… Read more »

We are new to the OT thing. We purchased 4 of the full package for Omaha. We don’t need all 8 days and did not know that a 4 day option would be available. What are the chances of being able to sell the tickets on site? They won’t release the tickets until a week or two before trials. I would be very grateful for any advice. Completely ignorant here.

Definitely can sell tickets there (not sure if they want you to, but lots of people were doing it when I went).