Beyond the Lane Lines: Gould Is Golden, Atkinson Honored 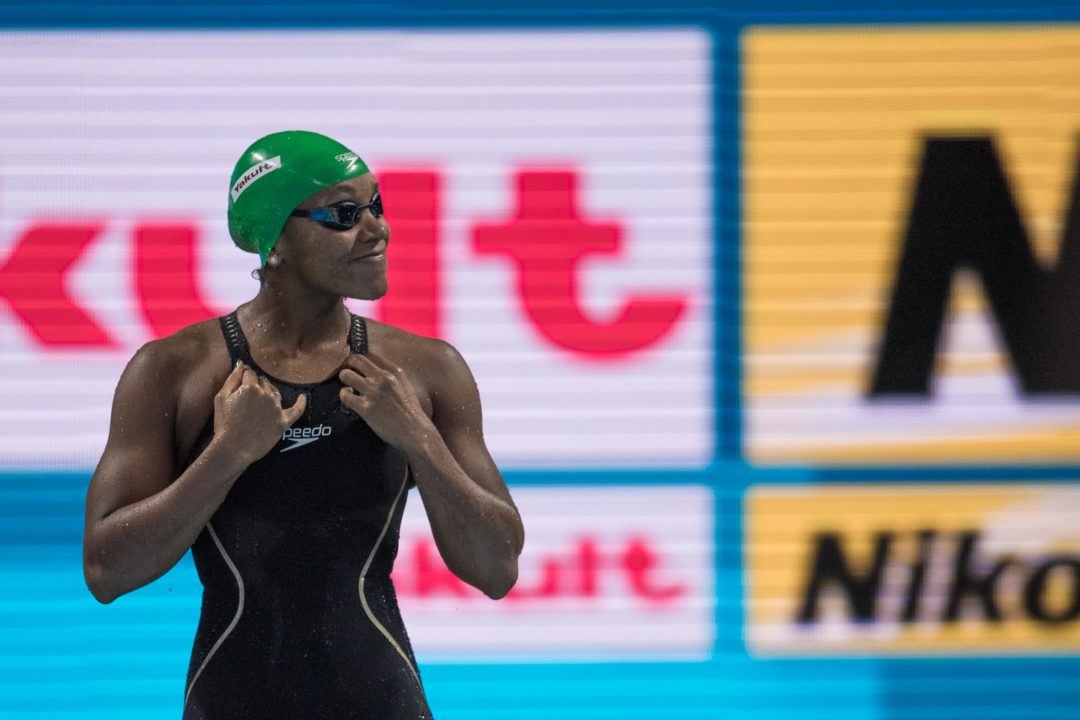 Read about what's happening with swim stars Freya Anderson of Great Britain, Alia Atkinson of Jamaica and more in the latest edition of Beyond the Lane Lines. Archive photo via Mike Lewis/Ola Vista Photography

Australian Olympic gold medalist Shane Gould was crowned champion of a different sort, as the 61-year-old won this season’s Australian TV show, Survivor: Champions vs. Contenders. As winner of the Sole Survivor title, Gould collected a $500,000 check and also earned the honor of becoming the oldest winner in Australian Survivor history.

Of the triple Olympic gold medalists’ perspective on aging, Gould stated, “Be encouraged that even though there’s a lot of social pressures that push you aside, you’ve got to fight for your ability to continue to contribute and participate in society.

“Being an older person, it goes to show that we’re not washed up, dried out and used, we’re certainly not. I came into this game as a champion and I’m leaving as a champion. It’s up there with my other achievement. It’s really the icing on the cake.”

Kael Yorke, Trinidad’s flag bearer at the 2018 Youth Olympic Games that are still underway in Buenos Aires, earned a new national age group record while racing in Argentina. Earning a time of 2:05.03 in the heats of the men’s 200m fly, Yorke clocked a new 15-17 national age group record to surpass his own previous mark of 2:05.20 set at the CAC Games. Yorke would up finishing 21st out of the prelims of the event at YOG.

Finally, Keryn Burke of Atlantis Aquatics took down a national age group record of her own, competing at the annual Peter Awong Memorial Sprint Meet over last weekend. Burke established a new girls’ 9-10 NAG record in the 100m IM, touching in 1:15.82 to overtake the previous record of 1:16.00.

Anderson, who competed in both the World Junior and  World Senior Championships last year, said of her recognition, “I’m super happy to be nominated for this. It’s an absolute honour and after successfully transitioning from junior to senior this year I hope I’ve inspired a few juniors that they can do it too.”

The 10 initial nominees, which also includes para swimmer Maisie Summers-Newton, will be narrowed down to just 3 on October 19th, with the winner announced on October 21st.

World record holder Alia Atkinson of Jamaica was recently conferred with her nation’s Order of Distinction in the Rank of Commander (CD) for her outstanding representation in the field of swimming.

“I don’t think anything else that I’ve done so far tops it,” Atkinson told The Gleaner shortly after being conferred with the honour.

“When I was sitting there and just absorbing everything it just made me feel like I need to try a lot harder in terms of things I can still accomplish and also try harder to embody all that I’ve accomplished,” said the former Texas A&M athlete.

Atkinson won 100m breaststroke gold at the 2014 Short Course World Championships, becoming the first black woman to ever win a world swimming title. More recently, the 29-year-old lowered her own SCM 50 breaststroke world record to 28.56 while competing at the World Cup Series in Budapest.

The Order of Distinction in the Rank of Commander is Jamaica’s sixth highest honor.

Shane Gould won all of her gold medals that year in world record time. She also held every world record from 100 m to 1500 m free plus the 200 IM world record all at the same time! Unbelievable .

It would be fair to add to your comment that Shane Gould’s achievements are almost a half of a century old and she held her records simultaneously for very short period of time. A lot of things have changed since then. Still being a great achievement in the history of competitive swimming it is not wise using it in measuring achievements of contemporary swimmers Everything is different starting with the equipment, swimming environment, coaching methods and finishing with the level of development of the competition.

no one else has done it. legend for all time

From Merriam-Webster:
legend noun
leg·end | \ˈle-jənd \
Definition of legend
a : a story coming down from the past
especially : one popularly regarded as historical although not verifiable
b : a body of such stories
c : a popular myth of recent origin
d : a person or thing that inspires legends

Why are we mentioning swimming legend stories from the prewar period so rarely? Isn’t it because it was almost a century ago and that swimming has nothing to do with what is happening in swimming pools now? Or it is because those swimmers are long gone and also long gone those who remembered them?

Shane Gould winning Survivor deserves a separate article. It wasn’t some special Celebrity edition; as the oldest contestant on the show, she outright won Australian Survivor and the $500,000 prize. She’s also just about to get her doctorate, and at one point held 6 world records at once. She is so badass.

Great to see Shane Gould in the news. She is still a legend in our sport, that is a fact. But this is a story of how she won a reality show. Somehow, this has turned into a discussion of whether her achievements as a competitive swimmer are worthy of acknowledgement by the snobs in the sport. She won a reality show. That’s the story. Congratulations, Shane. Well done.