“Best of the Rest” Recruit Henry Morrissey Commits to Stanford 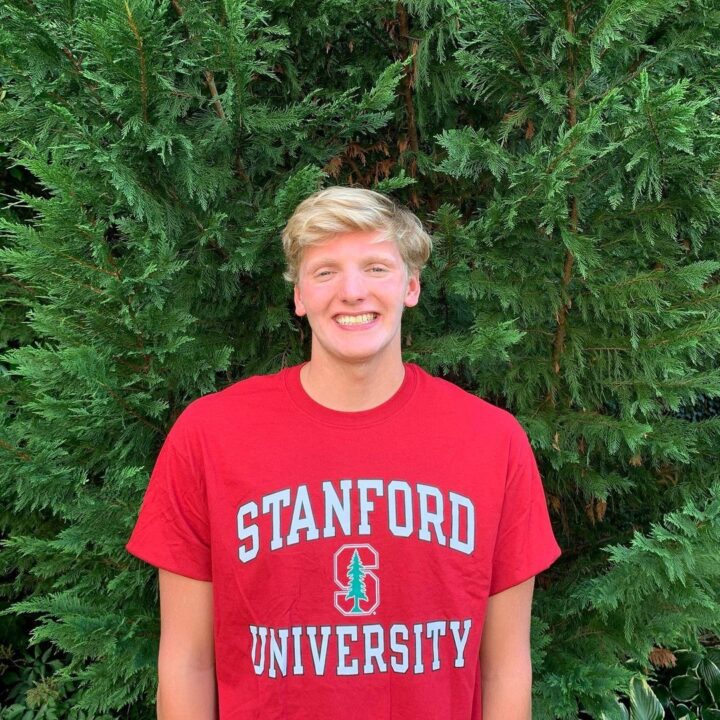 Henry Morrissey, one of the top ranked recruits in the high school class of 2022, has announced his verbal commitment to swim at Stanford University. Current photo via Henry Morrissey

Henry Morrissey, one of the top ranked recruits in the high school class of 2022, has announced his verbal commitment to swim at Stanford University.

Morrissey made the announcement on his Instagram account, writing, “I am beyond excited to announce my commitment to continue my athletic and academic career at Stanford University! I would like to thank my family, coaches, teammates, and friends who helped me get to this point! Thrilled to join the farm! Go Card!!! 🌲🌲🌲 #fearthetree”

Morrissey is currently ranked as one the “best of the rest” recruits on SwimSwam’s Rankings of the High School Class of 2022. The distance freestyle specialist, who swims for Germantown Academy Aquatics qualified for the 2021 US Olympic Trials in the 1500 freestyle and holds several US Open cuts.

Most recently, Morrissey competed at the JW Summer Solstice meet in late June, where he posted best times in the 200 freestyle, 400 IM, 200 IM, 400 freestyle, and 200 butterfly.

Morrissey is a huge pick-up for the Stanford men, who just lost distance stars Grant Shoults and True Sweetser to graduation. Last season, Morrissey’s best time in the 1650 freestyle would have ranked 3rd on Stanford’s roster, only behind Shoults and Sweetser.That same time would have placed 7th in the event at the 2021 PAC 12 Championships, meaning that Morrissey will be am immediate factor at the conference level.

In addition, his best time in the 500 freestyle would have ranked him 7th on the roster with a majority of the swimmers ranked ahead of him set to graduate before his arrival on campus. With another full year to develop, Morrissey could even put himself in range of an NCAA Invite, which required a time of 14:59 last season in the 1650.

At the 2021 PAC-12 Championships, Stanford’s men finished in 2nd place, only behind rival Cal. The Stanford men scored a total of 788 points throughout the meet. Then, they followed that up with a 14th place finish at the 2021 NCAA Championships, scoring 99 points.

With his commitment, Morrissey joins a deep Stanford class that already includes #2 and #3 ranked commits Josh Zuchowski and Liam Custer.

Congratulations to King Henry! Welcome to the Farm.

We need more exciting news after the Olympics 😄

Congratulations. You are about to embark on a life-changing experience.