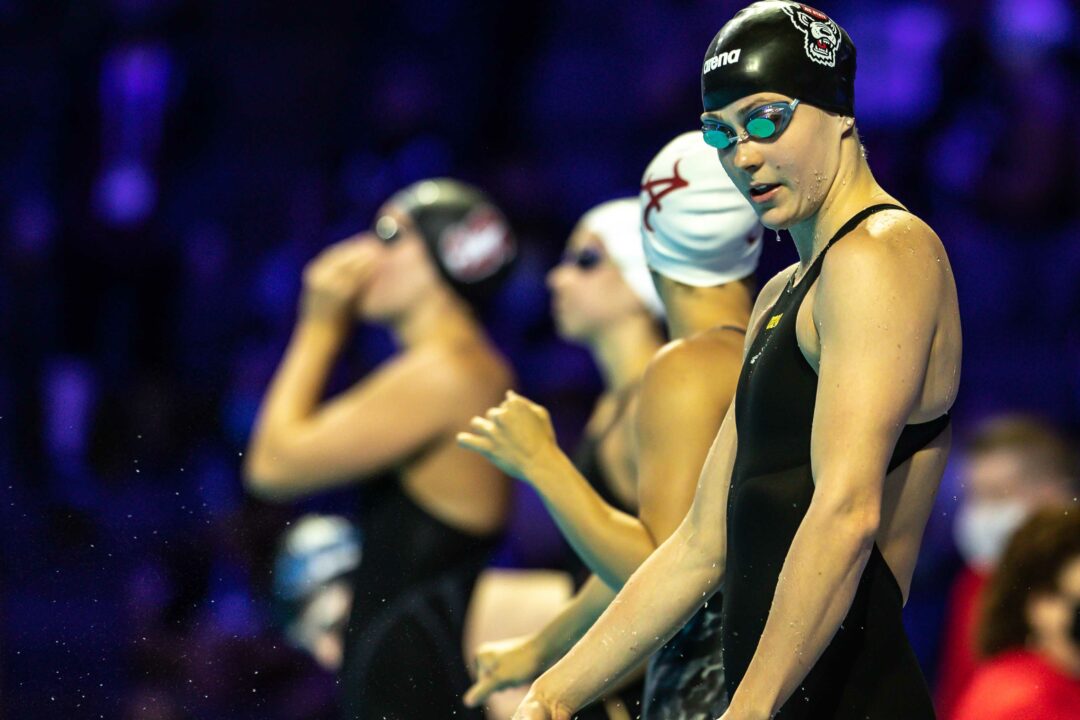 Wolfpack Elite’s Katharine Berkoff won the 100 free (55.23) with a .77 lead over the field. NC State rising junior Berkoff demolished her best time going into this meet which was a 56.84 from 2018 Summer Nationals. While she did not contest this event at the U.S. Olympic Trials Wave II, she is coming off a couple of impressive backstroke swims there where she placed 4th in the 100 back final and 8th in the 200 back final.

In 2nd place was Louisville rising sophomore Gabriela Albiero of Unattached-Kentucky (56.00) who was within .15 of her lifetime best from the May Pro Swim Series.

On the men’s side, Berkoff’s Wolfpack Elite teammate Noah Henderson won the 100 free with a huge lifetime best time of 50.07. The NC State rising junior took more than 2 seconds off his best time going into the meet to out touch 2nd place finisher Luke Miller of Unattached-Wolf (50.14) who is entering his sophomore year at NC State.

This time was close to the lifetime best Miller dropped at the U.S. Olympic Trials Wave II, a 49.88.

Kentucky rising junior Gillian Davey won the 200 breast and set a new school record with a time of 2:26.63. She lowered her own record and won with a 5.5 second lead over the field.

Louisville rising sophomore Aidan Kreiley won the 200 breast on the men’s side with a time of 2:16.53, about a second off his best time.

Wolfpack Elite’s Hunter Tapp won the 200 back with a time of 1:57.57. Only him and 2nd place finisher Michael Moore,a rising sophomore at NC State, who touched the wall at 1:59.77 cracked 2:00.00. NC State rising junior Tapp was within a second of his lifetime best from the U.S. Olympic Trials Wave II

SwimMAC Carolina ended the meet with the most combined team points.

Could see the first 48 100 SCY back from her this NCAA season.

Katharine is just getting faster and faster at State. Three more years with Holloway and she could be like her Dad. Congrats Katharine!