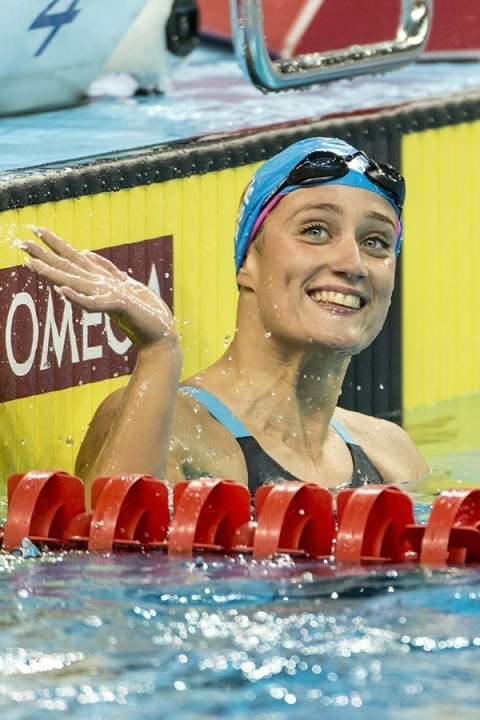 Mireia Belmonte posted a 2:05.86 in the 200 butterfly at the Spanish Championships... Current photo via G. Scala/Deepbluemedia

Mireia Belmonte took the women’s 200 butterfly in the world’s fastest time on the first day of the Spanish Championships in Malaga.

Belmonte won the event in a time of 2:05.86 which beats the time of 2:06.60 which Brianna Thorssell of Australia put up earlier this year.

The time is the fourth fastest time that the Spanish star has swum in her career.

Marco Orsi of Italy had a great swim of his own winning the men’s 50 freestyle in a time of 21.96. Orsi broke Eduard Lorente‘s competition record of 22.12 which was set in 2004. His time also places him third in the world and was not far off of his Italian record time of 21.82.

Konrad Cerniak of Poland finished second in a time of 22.14 which puts him seventh in the world rankings. He was followed by Markel Alberdi who hit the wall in a time of 22.42.

Zeng Wen Quah of Singapore took the men’s 200 butterfly in a time of 1:56.85. Zeng’s time puts him sixth in the world rankings and was not very far off of Joseph Schooling‘s national record time of 1:56.27 which he posted at the World Championships in 2013.

It was surprising to see European champion Duane da Rocha finish third in a time of 2:11.08.

Aliaksandra Herasimenia of Belarus took the women’s 50 freestyle in a time of 24.98 which puts her 10th in the world rankings. She was followed by Sasha Touretski who touched in a time of 25.52 and Fatima Gallardo who hit the wall in a time of 25.95.