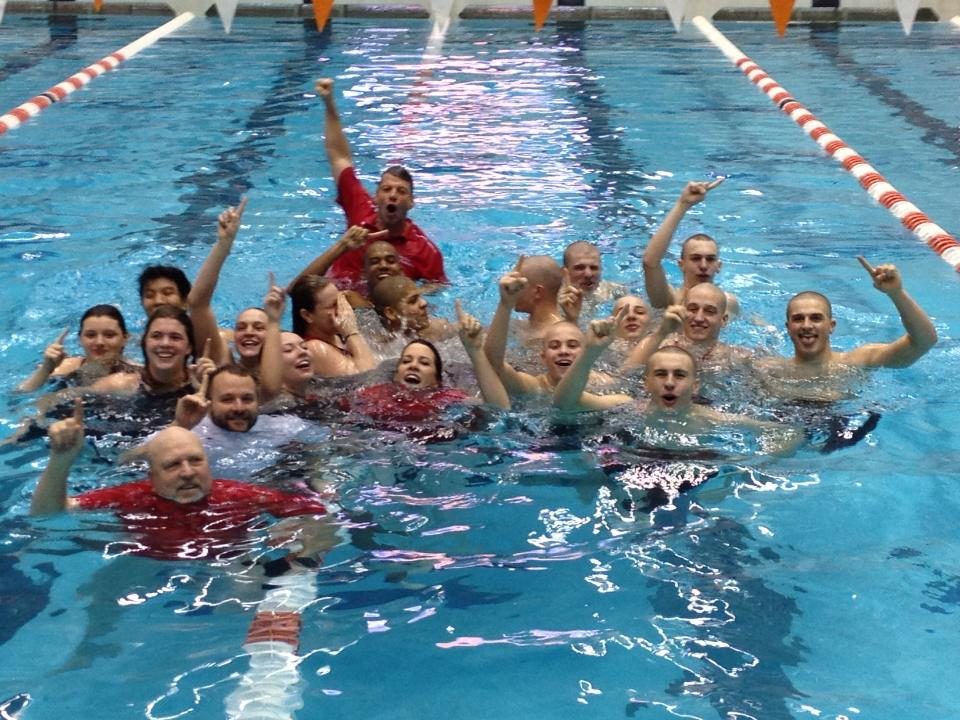 The Baylor boys team went for one more swim to celebrate their 2013 State Championship. 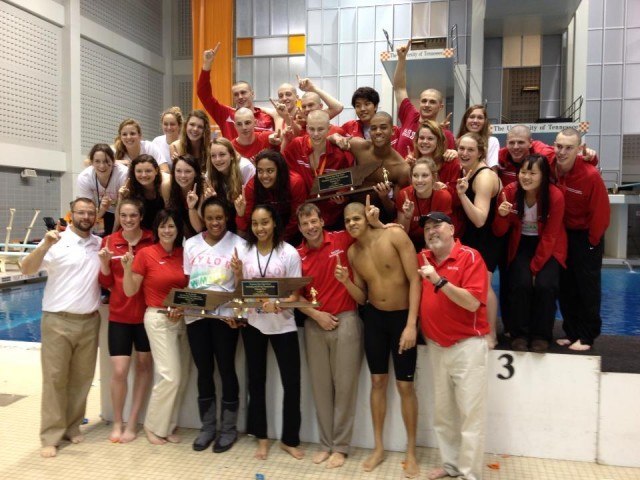 The boys and girls state champions from the Baylor School celebrate at the 2013 Tennessee High School State Championship meet.

Whereas their girls’ team sought a 7th-straight Tennessee High School State Championship this year, the Baylor School men came into 2013 with a chip on their shoulder. That’s because last February, they were upset by national-record-breaking Maclin Davis and Montgomery Bell Academy for the state crown.

The meet didn’t get off to a great start for the swimmers from Baylor. A 200 medley relay that was probably capable of a 1:32-low touched 2nd in 1:33.01, behind Ravenwood’s stacked 1:32.22 that included a 20.75 anchor from Grant Stafford. That whole Ravenwood relay of Ted Curtiss, Alex Goss, and Reece Boyd returned from a third-place finish in this same event last season wanting to go out with a win, and the four seniors made that happen.

Bearden High School’s Evan Pinion was, individually, the face of this meet and was honored as the official Swimmer of the Meet. The University of Tennessee-bound swimmer was looking for his third-straight sweep of the 200 and 500 freestyles. Pinion cruised to a 1:38.81 in the 200 free to win by two seconds ahead of Webb High’s John Myhre.

He was left pretty free-and-clear in that race, as the Baylor School’s Sam McHugh shifted to the 200 IM this season: a race he won in 1:48.00 ahead of impressive Montgomery Bell sophomore Chatham Dobbs. McHugh needed every inch of the big lead he got by pushing his backstroker leg, as Dobbs closed very well. The veteran McHugh conserved his energy just enough, however, to hold on for the win at the touch.

The Baylor guys didn’t win this meet with big wins and lightning; rather they did it with strong depth and consistently putting swimmers in the top 8 of a meet that has a lot more parity than the girls’ equivalent does. On the meet’s first day, in fact, McHugh’s 200 IM was their lone win.

In the 500 free, though, Pinion wouldn’t have quite as easy of a task. Every year, McHugh (who is a year younger) has inched closer-and-closer to his more nationally-known counterpart. This season was McHugh’s breakout year, and he really clawed in Pinion throughout this race…but at the final touch, it was the same story: another Pinion win in 4:24.22, with McHugh coming 2nd in 4:25.97. The two were a good 13 seconds ahead of anybody else, as compared to a much deeper field last season that had six guys go 4:30 or better.

Tyler Mills led the way with some very good sprint results for Science Hill High School, including a win in the 50 free in 20.94. That’s a gutsy result for the senior; the top three swimmers from last year’s meet all returned, but this year it was Mills (third of that group in 2012) who jumped up and snatched the victory.

Pace Clark of the Memphis University School rounded out the meet’s first day with a huge 47.37 win in the 100 fly. Clark has really emphasized a move away from the 500 free and toward the shorter stroke races this season, and that was absolutely apparent with a two-second drop from his time at State last year. Maclin Davis may have graduated, but the state of Tennessee continues its standing as the country’s butterfly mecca with that performance from Clark.

Then, two races later after Pinion’s 500 free victory, Baylor took their only relay win in 1:24.36. The foursome was Kaliszak, Christian Selby, Dustin Tynes, and Hinson again, including a 20.70 anchor from Hinson. He didn’t swim on this relay last year, but adding him back this season had a huge impact on their overall performance (they were runners-up last year).

Montgomery Bell, with a second-place overall team position on the line versus Pinion’s Bearden squad, came through big with a 3:07.79 in the meet-ending 400 free relay. Dobbs, the sophomore, led them off in a 45.29, and was followed by Tate Ramsden, Harold Duke, and the elder Dobbs brother Andrew Dobbs.