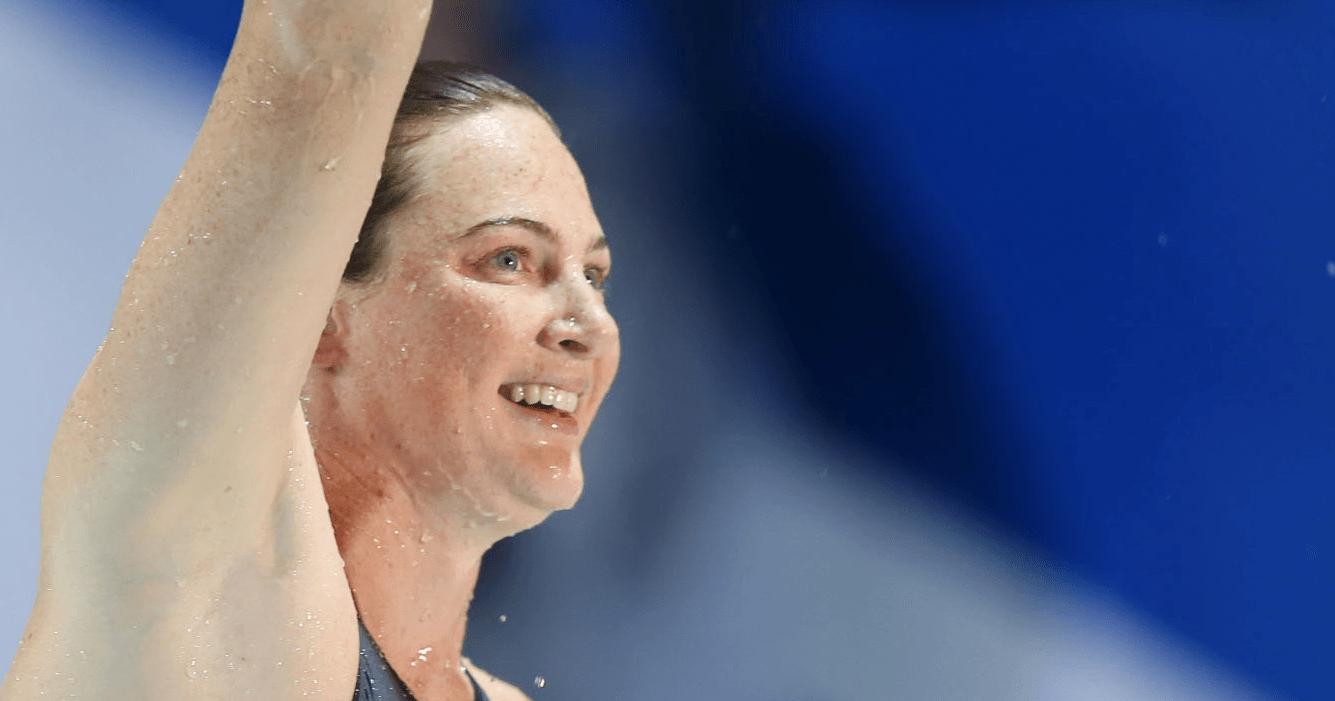 Australia led the way with seven event wins during the first session of the BHP Billiton Aquatic Super Series; Cate Campbell's winning 50m freestyle time of 24.03 was one of the highlights of the meet. Archive photo via Paul Younan

Putting his fly finesse on display was Tokyo silver medalist Tomoru Honda, kicking off his new year with a 1:53.87 in the 200m.

The first day of the BHP Billiton Aquatic Super Series set in Perth, Australia certainly brought some speed to the table with individual wins coming from each of the participating countries: USA, Australia, Japan and China. We are still only one month into the new year, but already the world rankings have been shifted after today’s results.

Australia’s Emma McKeon picked up two victories on the day, starting with an impressive 1:56.32 in the 200m freestyle, a time not too far off from the 1:57.19 she clocked just this past December at the Queensland Championships.  Today, she beat second-place finisher, China’s Duo Shen, by over a second (1:57.52), while Bronte Barrett rounded out the top three (1:57.97).  USA’s top finisher was Melanie Margalis, who clocked a 1:58.07 for fourth. This represented Margalis‘ first event of many, as she took over the spots of Elizabeth Beisel and Allison Schmitt in the 200 freestyle, 200 IM, 200 backstroke, 200 breaststroke and the 400 IM. Quite a schedule and quite big shoes to fill.

McKeon also won the women’s 100m butterfly race today in 58.24, a solid result for this 20-year-old given the time of year.  McKeon’s time of 57.76 is what nabbed her the bronze medal at 2014’s Commonwealth Games.  Teammate Brittany Elmslie finished in second place today in 58.49, followed by China’s Ying Lu who finished third in 58.88. The top American was Felicia Lee who touched in 5th with her time of 59.40.

The men’s 100m freestyle signaled the debut of Australia’s sprint machine, James Magnussen, under his new coaching team of Mitch and Lach Falvey.  Magnussen delivered a time of 48.43; a time quite a ways off the 47.59 the world witnessed from him at this same meet last year, but still a solid effort to get the job done today for first place and to offer a sign that his new training environment is serving him well.

Last year’s runner-up finished in second place again this year, as Aussie Cameron McEvoy touched the wall in 48.76.  USA’s Jimmy Feigen earned third today in a time of 49.17, just a skosh off his 48.98 best time from last year at Summer Nationals.  We will get the chance to see how Magnussen‘s briefly-tested new training translates to the 50m sprint tomorrow; McEvoy is also scheduled to make an appearance in that contest.

Japan’s first of its five total event wins is attributed to Kanako Watanabe’s victory in the women’s 100m breaststroke.  She topped the field in a time of 1:07.46, to clear back-half-charging Micah Lawrence (USA) and her second place time of 1:07.48.  Lawrence’s SwimMAC Elite teammate, Katie Meili touched closely behind in third in 1:07.54.

Daiya Seto also logged a pair of wins for Team Japan, topping the men’s 200m butterfly field by over a second with his time of 1:55.61, then with his commanding 400m IM victory in 4:13.36.  Grant Irvine (AUS) earned second place in the men’s 200m butterfly (1:56.84), but Seto was actually led by teammate and third place finisher, Yuya Yajima through the first 100m.  Seto sprang to action to close the race a solid second over his countryman, moving Seto past USA’s Andrew Seliskar in the rankings to be positioned as #1-ranked in the world thus far for 2015.  USA’s top finisher was Tyler Clary in fourth with his time of 1:58.77.

Seto’s second win, this time in the 400m IM, was a decisive victory, as he touched the wall over two seconds faster than the rest of the competitors in a time of 4:13.36.  The runner-up was teammate Takeharu Fujimori, who clocked a 4:16.05 today, just two one-hundredths faster than third place finisher Shun Wang from China, who finished in 4:16.07.  These three men now sit 1-3 in the 2015 World Rankings in this event.

Team Japan would also take the men’s 200m breaststroke event with Yasuhiro Koseki leading wire-to-wire in a final time of 2:10.45 for the win.  American Cody Miller’s time of 2:11.25 landed him second place, followed by another Japanese athlete, Ippei Watanabe, who clocked 2:11.86 for third.  American BJ Johnson finished in fourth in a time of 2:13.97.

USA’s first and only individual win on the day came in the form of Maya DiRado’s heroic achievement in the women’s 200m IM.  DiRado led the field through the first 150, but Shiwen turned on her legendary final gear in her attempt to overtake DiRado coming home on the last stretch.  The American was able to hold her off by a super slim margin of just two one-hundredths; 2:11.48 (DiRado) to 2:11.50 (Shiwen).  Australia’s Emily Seebohm finished in third with her time of 2:09.97.  Below are the 1-2 finishers’ splits to help you visualize the end of the race battle:

Although her 8:24.13 time resulted in second place today in the women’s 800m freestyle, Becca Mann gave the race her all against Australia’s Jessica Ashwood, the first place finisher by just nine one-hundredths (8:24.04).  The race came down to the final leg, where Ashwood out-split Mann 1:00.68 to 1:01.04 for the race win.  Mann’s time, however, does rank her as the 5th fastest 17-18 American woman of all time in this event – not too shabby of an achievement!

China’s only individual first place finish was captured by 19-year-old Yuanhui Fu, who clocked a swift 2:08.84 in the women’s 200m backstroke – a time that would have landed Fu in last year’s top ten in the world.  Emily Seebohm from Australia came in second in a time of 2:09.97, while USA’s Maya DiRado followed up her 200m IM victory with a strong third-place finish here in 2:10.40.

Australia landed back on top to tally another individual win, as young 18-year-old Mack Horton took control of the men’s 400m freestyle, clocking the top time of 3:46.48 over teammate David McKeon in his second-place finish of 3:46.74. USA’s Michael McBroom rounded out the top three in 3:51.09, a solid result for the 23-year-old whose 400m free times spanned from the 3:58 to 3:47 range throughout last year.

The real sparks flew in the women’s splash n’ dash event, where the Campbell sisters simply scorched the field with their 1-2 finish.  Cate Campbell led the way with a freakishly-fast-for-January 24.03, immediately followed by sister Bronte Campbell with her blistering 24.24, producing the field’s only times under the 25.0-mark.  Team USA’s Madison Kennedy finished in third place in 25.03, followed by teammate Margo Geer in 4th with her effort of 25.09.  For perspective, Cate Campbell’s time today would have left her positioned as the 4th-fastest woman in this event in 2014 and is a mere 0.07 off her Commonwealth and Australian record time of 23.96.  We’re only one month into 2015, folks!

The Australian women would wrap up today’s events with a solid win over the United States in the 4x50m freestyle relay.  The combination of Brittany Elmslie, Emma McKeon, Cate Campbell and Bronte Campbell was just too much for USA’s squad of Madison Kennedy, Margo Geer, Felicia Lee and Katie Meili to handle, as Australia won handily 1:37.68 to USA’s 1:40.02.  Cate Campbell figuratively  set the pool on fire once again, as she threw down a 23.76 split for the third leg of the race (yes, 23.76….that is NOT a typo).

Ending today’s session on a high note for the Americans, was the foursome of Ryan Lochte, Cody Miller, Tim Phillips and Josh Schneider who pulled off the other US win on the day in the men’s 4x50m medley relay.  Their time of 1:38.69 was enough to finish just ahead of the Australians whose time of 1:38.84 resulted in second place. Japan was not far behind with a third-place finish in 1:39.23.  Although Mitch Larkin got the Aussies off to the lead with his 25.64 backstroke split against Lochte’s 25.90, Australia’s Jake Packard’s 27.54 just was not able to get the job done against Cody Miller’s strong 27.11 to set things up for Schneider’s 21.69 finish.

The swimming competition continues tomorrow with the second timed finals session beginning at 4:30 am Eastern.

I’m surprised that they were able to continue the meet after Care Campbell “literally set the pool on fire.” That must have been quite the site to see and 1:38 is a pretty solid time for the American men who had to swim through those flames.

Is this the best ever time in the women’s 4×50 freestyle long course?

I think it’s most likely the best textile, but the dutch ladies might have swum faster in rubbersuits in 2009?

Australia could have won the 4×50 medley but they had the best splits on different relays. Magnussen and Hadler had the fastest free and fly splits but were on the B team

Bobo, please update us on the highlights of that meet.

According to account, DiRado led at the 150 but according to the splits in the results, Seebohm led the first 150 in the women’s 200IM, with DiRado and Ye passing on the last 50. Which is correct?

For those who are interested.
Golden Tour in Nice with Hosszu, Sjöström, Manaudou, Bousquet, Stravius….
Live webcast here. Day 1 finals start today at 5.45 PM here in France/11.45 AM ET in USA.
http://www.dailymotion.com/video/x2aj847_live-ffn-golden-tour-meeting-international-de-nice_sport

24″03 is the 11th fastest time ever, and her 4th best time… it seems the whole surgery thing including “if I miss Kazan it won’t be a big deal” was not serious.

She commented in her post race that the shoulder is still giving her some pain. How much to make out of that is another matter. What HAS been very apparent so far in 2015 is that both Campbell sisters are sending out some very clear warning shots to their international competitors that they’re certainly not “going away” this year and don’t look to be going “backwards” as regards times.