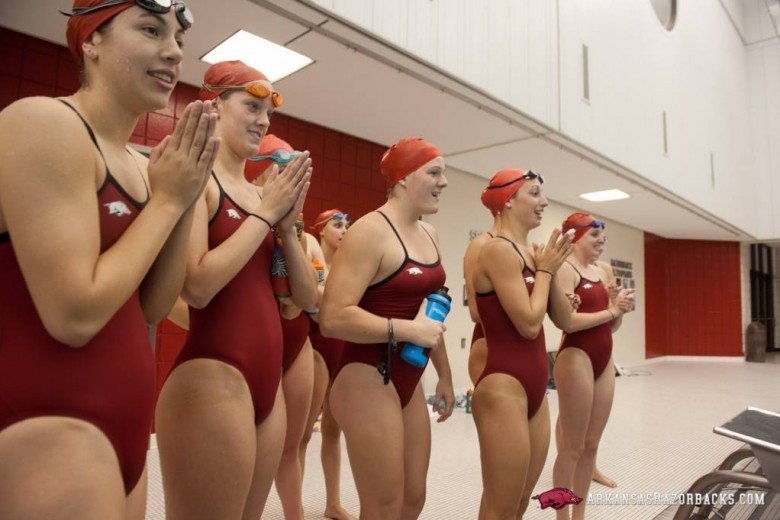 The Arkansas women, for the second-straight year, were impressive at a meet-opening relay meet. photo via Logan J. Webster/UA Athletics

Last year, the Arkansas women hosted their own relay meet to begin the season. This year, they traveled to one hosted by North Texas in Denton, but the story was the same: with a nearly identical format, the Razorbacks put up very, very fast times, quite comparable to the ones they did en route to a breakout season last year, and came away with a win.

In the meet-opening 300 yard fly relay, the Razorbacks had three swimmers combine, 100 yards each, for a 2:50.32. That included a 55.66 lead-off from sophomore Susanna White. SMU took second, though over 5 seconds slower.

The Mustangs were hurt in this meet format (A and B relays score) by a relative lack of depth, and  were also short a few of their top swimmers, who were attending the wedding of former teammate Denisa Smolenova.

The 300 yard breaststroke relay swung things back to Arkansas, including a 1:03.6 lead-off from Nikki Daniels – who broke the school record in the 100 last year in 59.2. SMU again took 2nd, and North Texas placed 3rd.

Arkansas broke through as the first team to win two-straight races as they crushed the field in the 800 free relay, swimming a 7:33.96 to win by 10 seconds ahead of Houston. The Razorbacks got a 1:51.87 anchor from sophomore Anna Mayfield.

Runner-up Houston swam a 7:43.45, which included a 1:53.18 lead-off from senior Heather Winn. That’s a huge season-opening split from her.

They followed that up with yet another win, in the 200 free relay, including Drolc splitting 23.00 on her second-straight anchor.

Arkansas, North Texas, and Houston, all of whom have new head coaches in the last 16 months, are all definitely on an upward climb to “peaks” in the history of their program. As for SMU, they had a great year in 2013, and didn’t graduate much, but we’re still waiting to see their full roster to get a good feel for where they’ll be at this year. They were certainly, at least, the second-best team at this meet when at full strength.