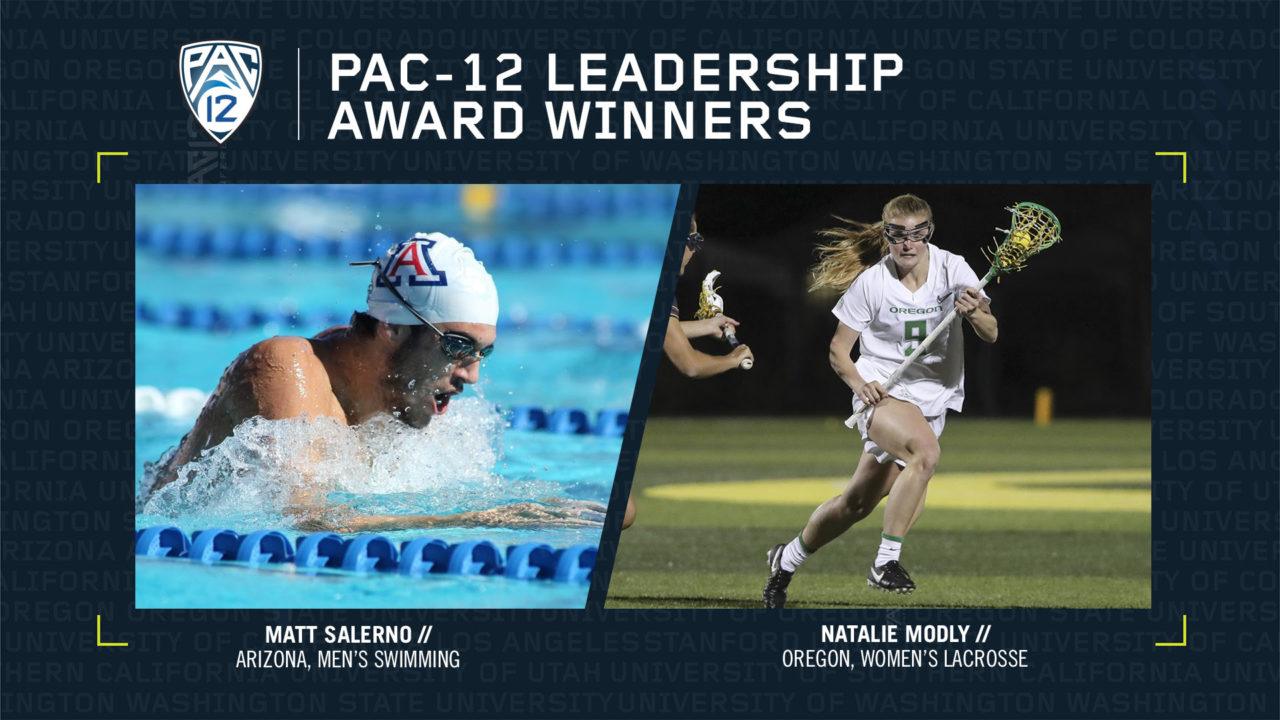 SAN FRANCISCO – Arizona men’s swimmer Matt Salerno and Oregon lacrosse’s Natalie Modly have been named the 2017-18 recipients of the Pac-12 Conference’s Leadership Awards, Commissioner Larry Scott announced today. Salerno is the eighth Wildcat and Modly is the second Duck to earn the honor since the award was established in 2002.

The Pac-12 Conference Student-Athlete Advisory Committee, which is composed of representatives from each member institution, selects the winners of the award each year from nominations submitted by each campus SAAC.

To be eligible for the award, nominees must have completed or be in their final season of athletics eligibility, be enrolled in or plan to attend graduate school, have been a letter winner in a varsity sport, and have served a minimum of one year on the campus SAAC. Other factors which may be taken into account during the selection process include other leadership activities, community service, grade-point average, service as a SAAC officer, and level of athletic achievement.

Salerno, a native of Aurora, Ill., is in his fourth season with Arizona men’s swimming. The senior is a veterinary science major with a 3.80 GPA and plans to pursue a doctorate of veterinary medicine (DVM) in graduate school. Salerno has spent two years on the campus’ SAAC and was named the president of the organization for the 2018-19 year. He is also a member of the Pac-12 Student-Athlete Leadership Team (SALT), a group that is a part of the Conference’s governance structure whose mission is to advance the student-athlete voice and make important recommendations to the Conference’s athletic directors, senior woman administrators and faculty athletic representatives. Salerno was named the mental health subcommittee chair and to the community service subcommittee as a part of the SAAC.

Salerno is also very active in his community through involvement in programs in the Tucson area such as the Peer Athletic Leaders Summit, which teaches leadership skills to youth of military families, and the Classroom Cats Pen Pal Program, an initiative that works with local elementary schools to promote the importance of physical health and academic success. He was a recipient of Arizona Athletics’ annual Community Service Award for having completed the most hours of community service by a male student-athlete. His excellence in the classroom and the community has earned him numerous recognitions, including a spot on the Pac-12 All-Academic first team in 2017 and 2018. He was awarded the Hope I. Jones Veterinary Science Scholarship, E. Ray Cowden Veterinary Science Scholarship and Arizona Excellence Scholarship.

In the pool, Salerno has served as team captain of the men’s swimming team for his exceptional leadership and performance. He earned All-American Honorable Mention honors in the 400-meter medley relay while also being named a CSCAA Scholar All-American last year. He holds the eighth fastest 100-meter breaststroke time in program history.

Natalie Modly was a four-year letter winner on the Oregon women’s lacrosse team from 2015-18 and served as the team captain during her junior and senior seasons. Completed her undergraduate degree in general science last March with a 3.90 GPA and is currently enrolled at the Lake Erie College of Osteopathic Medicine to pursue her doctorate of dental medicine. Modly traveled to El Crucero, Nicaragua in 2016 as a dental assistant on a dental/medical service trip to provide medical care and dental hygiene educational courses to communities in need.

In 2018, Modly garnered Pac-12 All-Academic first team honors as well as the University of Oregon Jaqua Award given to the graduating senior student-athlete with the highest GPA. During Oregon’s first year competing in the Conference, Modly started all 18 games, tallied 27 goals and led the Ducks to the Pac-12 Tournament semifinals. In the opening round of the tournament she netted a career-high six goals, and was one of two Ducks selected to the Pac-12 All-Tournament Team.

During her time at Oregon, she earned Intercollegiate Women’s Lacrosse Coaches Association (IWLCA) Academic Honor Roll in 2017 and 2018 and was named a Mountain Pacific Sports Federation (MPSF) All-Academic Scholar-Athlete in 2016 prior to Pac-12 play. Modly also received a Pac-12 Postgraduate Scholarship in July, 2018.

The Annapolis, Md., native participated in Oregon’s Student-Athlete Advisory Committee (SAAC) and served as the Co-Director and Executive Board Member, where she was responsible for planning and running meetings. Modly was an active member in the community and helped several volunteer organizations including OHeroes, HOSEA Homeless Shelter, Read Across America Day, Special Olympics Bowling, Candle Lighter Organization’s monthly events for cancer patients, National Girls in Sports Day lacrosse clinic and a Quack in Action field day.

Congratulations! This is an award that is more important and says a lot more about the future of the individual than any swimming time will.