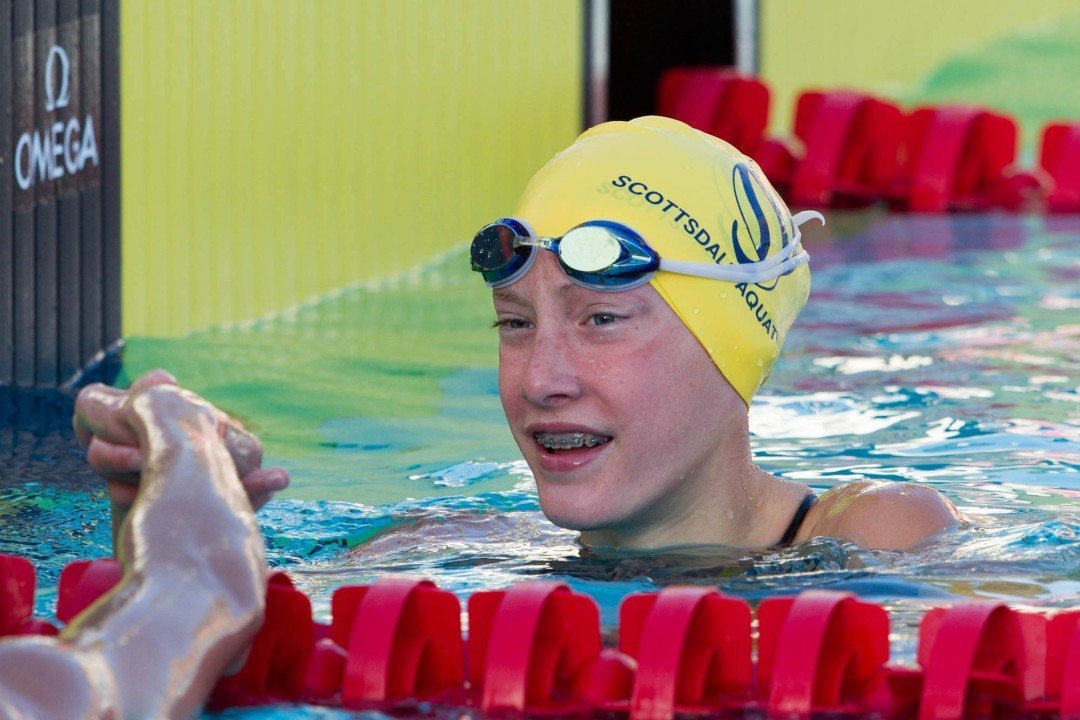 The Chaparral girls led this meet from start to finish, as they won all three relay events and four individual events, and had A-finalists in every event except one, to take the championship by 125 points over Desert Visa High School, 359 to 234.

Ruck was not the only Chaparral girl to win two events, however.  Junior Emma Broome also doubled, winning the 100 fly in a time of 55.07 as well as the 100 back.  In the latter event, she beat out last year’s champion senior Matti Harrison of Arcadia High School, 54.80 to 55.62.

Junior Savannah Carlson, also representing Arcadia, repeated as champion in the 200 IM, winning with a time of 2:02.94.  Pinnacle junior Alyson Yancy also successfully defended her title from last year in the 100 breast.  She touched out sophomore Claire Grover of Boulder Creek 1:02.62 to 1:02.76.  By that point, however, Grover had already secured an individual championship, as she won the 50 free earlier in the meet with a time of 23.42.

Senior Allie Worrall of Xavier High School was the other individual event winner, as she touched first in the 100 free with a 51.79.

Chaparral also swept the relay events.  They started the meet by winning the medley relay with a time of 1:44.62 and continued their winning ways in the Ruck-less 200 free relay, beating Desert Visa 1:36.99 to 1:37.37.  At the end of the session, Chaparral punctuated their championship by setting a new state record in the 400 free relay, with their time of 3:26.47 eclipsing the previous record of 3:26.86, set by the girls of Pinnacle High School last year.

The Brophy Prep boys won their 28th straight state title this weekend, a streak that began in 1988.  At that time, Ronald Reagan was the President of the United States, the world news was abuzz with Mikhail Gorbachev and glastnot, and many current members of USA Swimming National Team were not even born.

The other big star of the past two state championship meets, junior Ryan Hoffer, also switched his lineup by one event.  He won his third consecutive championship in the 50 free in a time of 19.95.  He then took advantage of Jurek’s absence in the 100 fly to swim that event and break Jurek’s record from last year, 47.47 to Jurek’s 47.80.

In other individual events, Catalina Foothills High School junior Brooks Fail defeated the incumbent champion, Horizon senior Ben Olszewski, 4:26.68 to 4:27.53.  Last year, Olszeweski set the state record in this event with a 4:21.48.  Josh Vedder, a Desert View junior, won the 100 back in a time of 50.26, and Hamilton High senior Ty Dang swam a 55.97 to win the 100 breast.