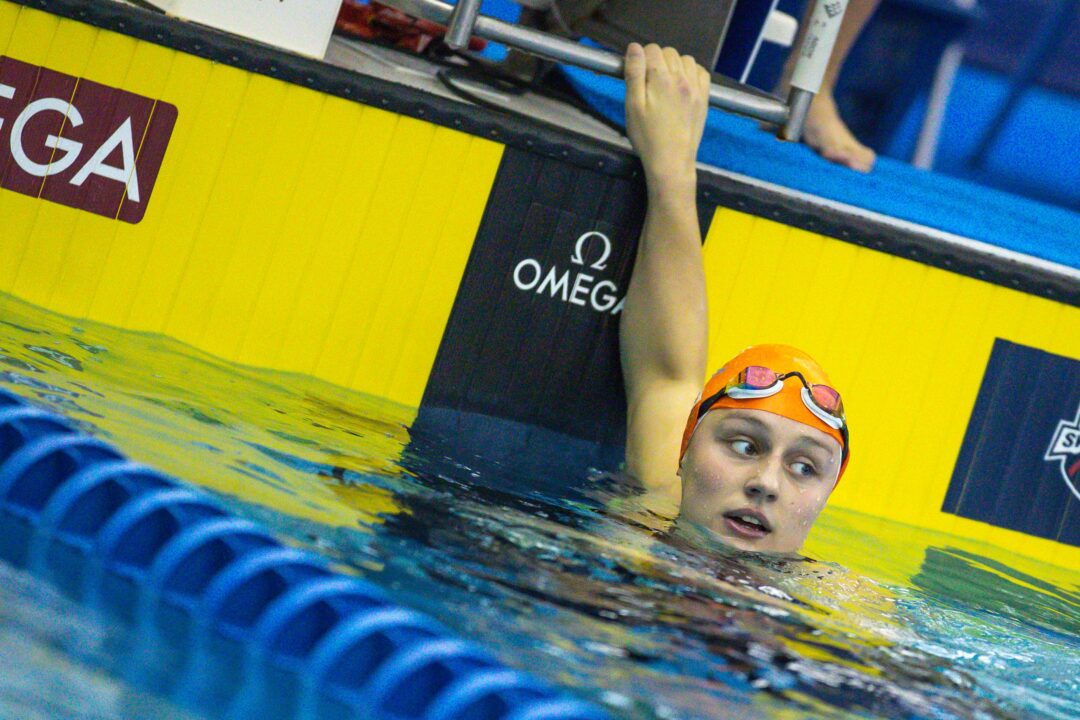 Tennessee's Brooklyn Douthwright went from being the team's seventh-fastest 200 freestyler during the season to SEC runner-up after dropping a 1:43.45. Archive photo via Jack Spitser/Spitser Photography

There’s been no shortage of standout performances this week as conference championship meets in the NCAA have ramped up, with plenty of highlights coming out of the ACC and SEC Championships specifically.

One swim that’s flown a little bit under the radar was the 200 freestyle performance of Brooklyn Douthwright, one of many Tennessee freshmen that have been swimming lights out at SECs over the last few days.

A native of Riverview, New Brunswick in Canada, Douthwright entered the season having never raced in the yards pool, and came into her first conference championships with a 200 free PB of 1:46.24 set at the Tennessee Invitational back in November.

That time only ranked her seventh for the season on the stacked Tennessee women’s roster, leaving her off of the Vols’ 800 free relay lineup on Tuesday night.

But in the individual 200 free, the 18-year-old came to play, dropping her best time by well over two seconds in 1:43.97 to qualify third into the final.

At night, Douthwright went toe-to-toe with defending champion Riley Gaines of Kentucky, falling just off the pace on the last 50 to ultimately place second in 1:43.45.

Douthwright’s time marked another PB by a half-second, and is faster than three of the four legs on Tennessee’s winning 800 free relay from Day 1. The only faster time came from another freshman, German native Julia Mrozinski, who led the team off in 1:43.21.

Mrozinski is a relatively old freshman, however, having turned 22 on Wednesday, while Douthwright is still only 18. In fact, Douthwright’s swim would rank 15th all-time in the girls’ 17-18 age group if she was an American, which, if nothing else, shows how strong of a swim it really was.

Looking forward to seeing what she can do at trials 🧡🇨🇦!

👏👏👏 Hopefully she’s planning on swimming at Canadian Trials – she if she can push for a 4×200 relay berth.