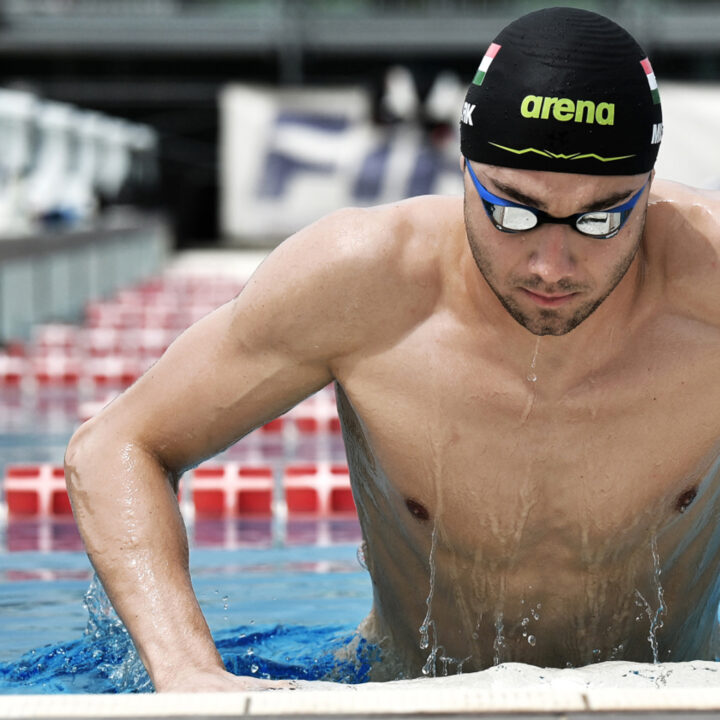 The 21-year-old Hungarian’s new contract runs through 2024 and includes the Summer Olympics in Paris. Current photo via Alfredo Falcone, Lapresse

arena is pleased to announce the renewal of its partnership with Olympic and World butterfly champion, Kristóf Milák. The 21-year-old Hungarian’s new contract runs through 2024 and includes the Summer Olympics in Paris.

“I’m happy and feel privileged to extend my contract with such a great international brand,” said Kristóf. “During our contract renewal discussions, I felt that we are completely on the same page, and have the same vision about our collaboration and common future.”

Kristóf first raised eyebrows in the swimming world in 2017 when he broke the 100 and 200 butterfly World Junior records multiple times, and won his first senior international medal – 100 butterfly silver – in front of his home crowd in Budapest at the FINA World Championships. In 2018 he won his first European title in Glasgow, breaking the 200 butterfly Championship record, and by the end of the year, only two swimmers – Michael Phelps and compatriot László Cseh – had swum this event faster.

That changed in 2019 at the World Championships in Gwangju, South Korea, when he became the first swimmer in history to break 1:51.00 in the 200 butterfly, smashing Phelps’ 10-year-old record by 0.78s to claim his first world title in 1:50.73. A year later at the European Championships in Budapest, he swam the second-fastest 200 fly in history, crushing a world-class field by more than 3 seconds as he successfully defended his 2018 title and broke his own Championship Record in a time of 1:51.10. In the 100 butterfly, he equalled the 100 fly Championship record in prelims, then broke it twice more in the semis and finals, ending with a title-winning time of 50.18.

At the postponed 2020 Olympics in Tokyo, Kristóf crowned his explosive career with the 200 butterfly title, producing a dominant display as he won by almost 2.5s in a new Olympic record of 1:51.25, and has now posted the four fastest 200 fly times in history. He went on to almost snatch the 100 butterfly as well, losing by just 0.23s as he broke Milorad Čavić’s 12-year-old European record in 49.68 to become the second-fastest swimmer in history in this event.

At just 21 years of age, Kristóf seems destined to create yet more history swimming the three-diamond colours of arena.