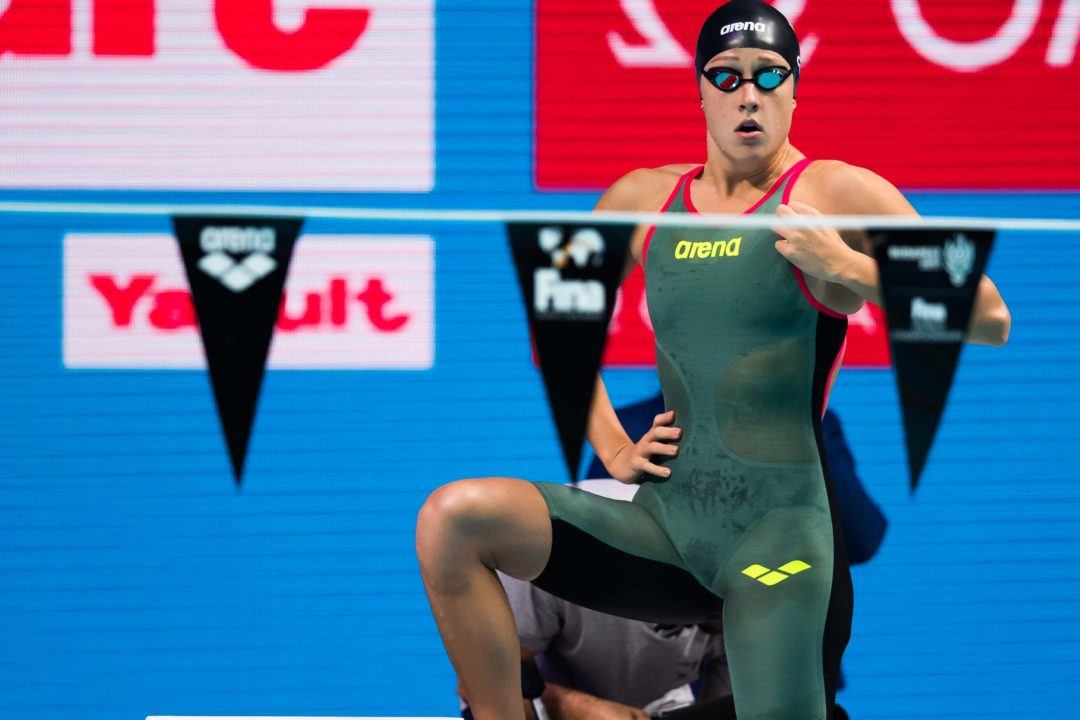 Global water instinct brand arena has added Texas native and middle-distance swim sensation Madisyn Cox to its roster of elite athletes. The 22-year-old from Lubbock, Texas has dominated her first season as a pro with gold medals in her signature IM and breaststroke events at the 2017 arena Pro Swim Series. This week, Madisyn went on to thrill global swim fans by flying into a bronze medal win in a stacked race during the 200m IM FINA World Championship.

While swimmers at all levels experience occasional set-backs and break-throughs, Madisyn’s specialty is in facing challenges and taking the field by surprise. Just weeks before World Championships, she stunned the crowd at National Championships swimming 2:09.69 in the 200m IM swim; her lifetime best and fourth in the world rankings. What many in the crowd didn’t realize is that in the days leading up to this incredible swim, Madisyn contracted a devastating stomach illness left her dehydrated and depleted. She spent the next 48-hours recovering and channelling her signature mental strength to compete in three of her four scheduled races.

“Madisyn’s ability to break-through challenges is what makes her a true champion, in and out of the pool,” said arena U.S. General Manager Mark Pinger. “She’s the perfect addition to the arena family. She’s passionate about the sport, and loves to compete. She sees a challenge and she rises to it, with all of her heart, body, and mind. We’re thrilled to continue to support her.”

In addition to racking up medals, Madisyn’s past four years have shown consistent improvements in performance and a relentless spirit to challenge her personal best. The growth suggests that there is much more still to see from the talent that describes her international debut in Budapest as a “stepping stone.”

“I’m so proud to be joining the arena family,” said Madisyn. “In the four years that I’ve been training and racing in arena products, I’ve set and achieved so many goals. It just feels right knowing that they will be supporting me for the next four years. I’m excited to be on a roster of athletes that includes Olympic Champions and World Record Holders Katinka Hosszu, Sarah Sjöström, and Adam Peaty.”

Before becoming a professional athlete, Madisyn captured the national spotlight as top-talent and Co-Captain of Texas Longhorns Women’s Swim Team. The three-time All American champion swam the 10th-fastest 400m IM in history and 2nd all time for UT at 4:00.97, while also medaling in the 2015 World University Games, and named Big-12 Conference Swimmer of the Year in 2015. Madisyn has been a member of the U.S. National Team since 2014, and earned her first international Long Course medal at the 2017 FINA World Championships in Budapest.

For over 40 years arena has equipped the world’s leading swimmers and lovers of watersports with racing, training, and leisure swimwear and accessories built on a foundation of in-depth research, technical know-how, and an unyielding commitment to quality. With U.S. headquarters in Portland, Ore., Arena is the exclusive outfitter of the U.S. National Team, and a proud partner of USA Swimming. www.arenausa.com.