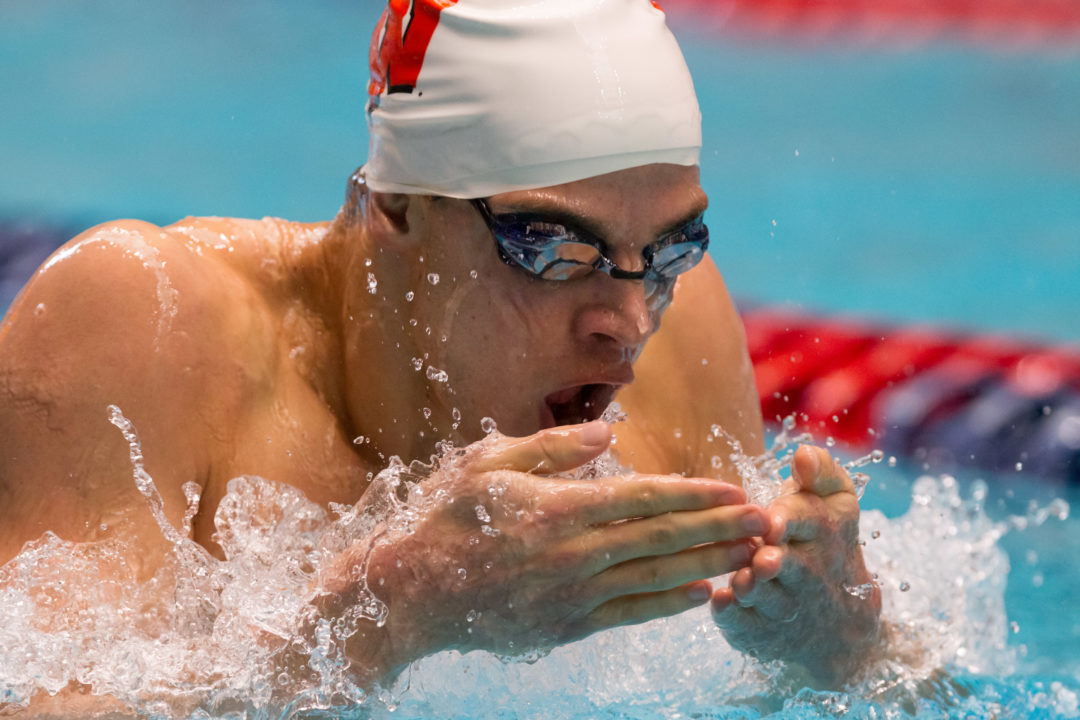 Wisconsin's Michael Weiss took the 2nd seed in the men's 400 IM as the Russians and the Americans are both lined up to win at least 5 more medals in the last pool session of the meet on Tuesday evening. (File Photo: Tim Binning/TheSwimPictures.com)

A short preliminary session marks the final day of pool swimming in Kazan at the World University Games (with open water set to go on Wednesday), with a pair of 400 meter events and a pair of relay preliminary rounds.

First, in the women’s 400 freestyle preliminary rounds, Elena Sokolova from Russia took the top seed in 4:11.71, holding off Caitlin McClatchey (4:11.84) and American Stephanie Peacock (4:12.21) for the top seed. Those three all came out of a swift first heat in the preliminaries, meaning that they probably pushed a bit harder early than some of their competitors did.

Similarly, the 3rd preliminary heat was strong as well, with Australian teenager Leah Neale coming in for the 4th overall seed in 4:12.89 and Canadian Brittany MacLean sitting 5th in 4:13.22.

The 2nd prelim, though, was the one that caught a few folks. It was won by Italy’s Martina de Memme, the swimmer who on Monday had to be carried off deck on a stretcher after winning the 800 free, in 4:13.22, but she would be the only swimmer in the heat to advance. That meant the 2nd American Chelsea Chenault was left 9th in 4:14.04 and out of the final despite being the 2nd seed overall. This was a rare non-final for the American squad at this meet.

In a surprise appearance, Russia’s Semen Makovich, who swept the 200 and 400 IM’s in Poland at the European Junior Championships over the weekend, has returned home to Russia to final in this 400 IM with a 4:20.99. That’s much slower than the 4:14 that he used to win in Poznan, though, so he could challenge for gold if he can get revved up for finals.

Though all will make changes in the finals, it seems as though the Russians have the most to be gained from those changes with the possibility of inserting Anastasia Zueva and Yulia Efimova into the front-half of their relay. The Americans, though, have a chance if Megan Romano ends up anchoring and popping another big split like she’s done in the other two relays thus far.

The Russian men, however, will probably move Vlad Morozov into their backstroke leg and Andrey Grechin into their freestyle leg, which still makes them the favorite in finals.

These finals will combine with four others (women’s 50 free, men’s 50 free, women’s 50 breast, and women’s 200 fly) to form the last session in the pool in Kazan tonight.

I would love to see a 100 IM between Vlad Morozov and Florent Manadou.
My guess is Morozov would win.

He will break the world record very soon, perhaps in the next world cup meets.

Yes, the European cluster of the World Cup immediately after the Worlds will be remembered as smashing records. Participants are going to be first-class and still almost at their peak.

what did he do in the trials?
A case of not tapered enough?

My totally uninformed guess is that his tapered was geared for WUGs all along. A great result for him!

Which makes her relatively unimpressive 200m even more mysterious. Has she been training for all out speed rather then endurance, or did she just take it easy in that race. I suspect the latter, but you’d think after going eyeballs out in the other 2 breast events she would have wanted to really make a statement and give her rivals something to think about.

But then this is Efimova, who sometimes seems to forget she’s in a race until the last length of the pool, so who knows…

She will finish second behind RMP in the 200 breast in Barcelona.

I added Efimova to my list of stroke rates (number of strokes) in Women’s 100m breast:

Efimova seems to raise her stroke rate over last 50 metres considerably more than her opponents on my list.

Bronze for Romano in the 50 free.