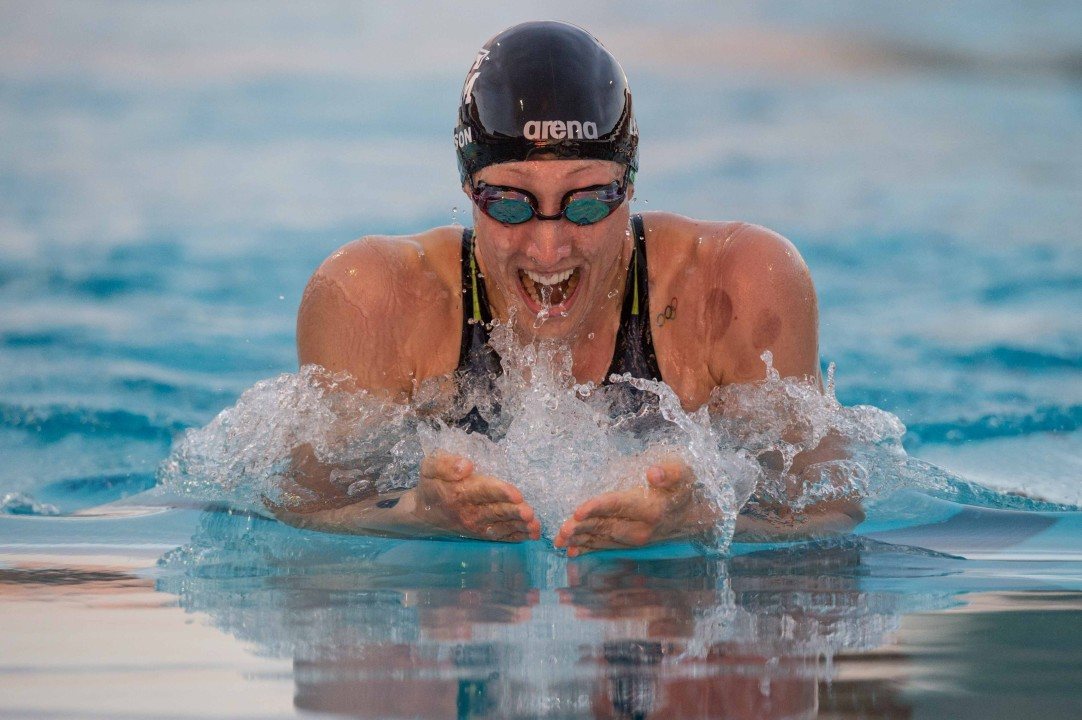 Breeja Larson didn't get a shot at the 50 breaststroke at the World Championships, but did swim a time on Wednesday that would have finaled. Archive photo via Mike Lewis/Ola Vista Photography

Day 2 of the 2015 FINA World Cup Series’ initial stop in Moscow, Russia, the American team that’s held over from the recent World Championships had great success.

Their female counterpart Breeja Larson swam well in both breaststroke races. She swam a 30.56 as the top qualifier in the women’s 50 breaststroke, followed by Katie Meili (31.49), who established herself as America’s new top breaststroke threat but did so at the Pan American Games after missing the Worlds team.

Larson didn’t swim this event at the World Championships, but that time would have made the final – a final that the Americans only put one swimmer into.

The defending World Cup champion Katinka Hosszu also took two top seeds heading into finals. First she swam a 55.18 in the 100 free ahead of Russia’s Veronika Popova. The Russians hold 5 of the top 7 seeds in that race, with the other infiltrator being Australian Bronte Barratt (55.65) – the 3rd qualifier.

50.45 by MP in San Antonio
50.44 by Le Clos tonight
Then Le Clos boasts again in the media….
MP reads what he said, is again irritated, takes quickly a flight to Chartres and swims next weekend 50.43 with Le Clos in the stands who has scratched the event at the last moment citing a shoulder issue.

Sorry if this might sound dumb but didn’t MP already said he’s not going? Would want him to go to see him and Le Clos fight early though

And Shields came back on him! 🙂

And talking about Chartres happy to see that the best French swimmers will be present as well as Ryan Lochte, Missy Franklin and Natalie Coughlin!
They will add MP in the

Speaking of Missy F., thanks to commenter Spieker Backer for posting the following link yesterday.
http://olympictalk.nbcsports.com/2015/08/11/missy-franklin-swimming-world-championships-olympics-todd-schmitz-coach/

Wow! Some parts of Todd’s words could have been written by me!
I’m sure he reads swimswam! 😆
3 main topics
Her back issues
A smarter schedule in the future with finally no more 100 free in individual (finally)
And her backstroke starts problems
Very interesting

Todd makes sense! So Missy, don’t ever go back to Terri!

You are a piece of work POL. Never miss the chance to dis Missy’s Cal coach.

I don’t understand Todd’s comments about how she’ll never have underwaters like Coughlin because of her height. Phelps and Lochte are taller than she is and have great underwaters. Am I missing something? How would it be different for tall female swimmers?

that irritated me as well

Interesting article. I agree that her chances of a 100Fr medal are not the greatest. I wonder if using Missy’s height as a reason for her poor starts and underwaters is accurate. Matt Grevers and many other giant men seem to do pretty well on their starts and underwaters. I do think she’s not a pure sprinter- not as explosive as Grevers, but with lots of work, hopefully the can bring her starts up to par.

Forgot to finish my sentence above. They will add MP to the entry lists tomorrow. 🙂

Other interesting things from that olympic sports’ site

http://olympictalk.nbcsports.com/2015/08/10/michael-phelps-200-individual-medley-usa-swimming-championships-olympics/
MP has not praticed a lot backstroke and freestyle in the past few months.
He feels in the same condition as in 2007. 🙂

http://olympictalk.nbcsports.com/2015/08/10/katie-ledecky-swimming-world-championships-rio-olympics-2016-sarah-sjostrom/
KL thinks that Sjöström will swim the 200 free in Rio.
And has the 4X100 free relay in mind. 🙄 It would be cool for her total of medals but, and with all the respect due to KL, I’m not sure it would bring something more to that relay. The US relay doesn’t need another girl in 53 high but needs girls in 52.

We read the same articles, starting from the one on Missy 😀