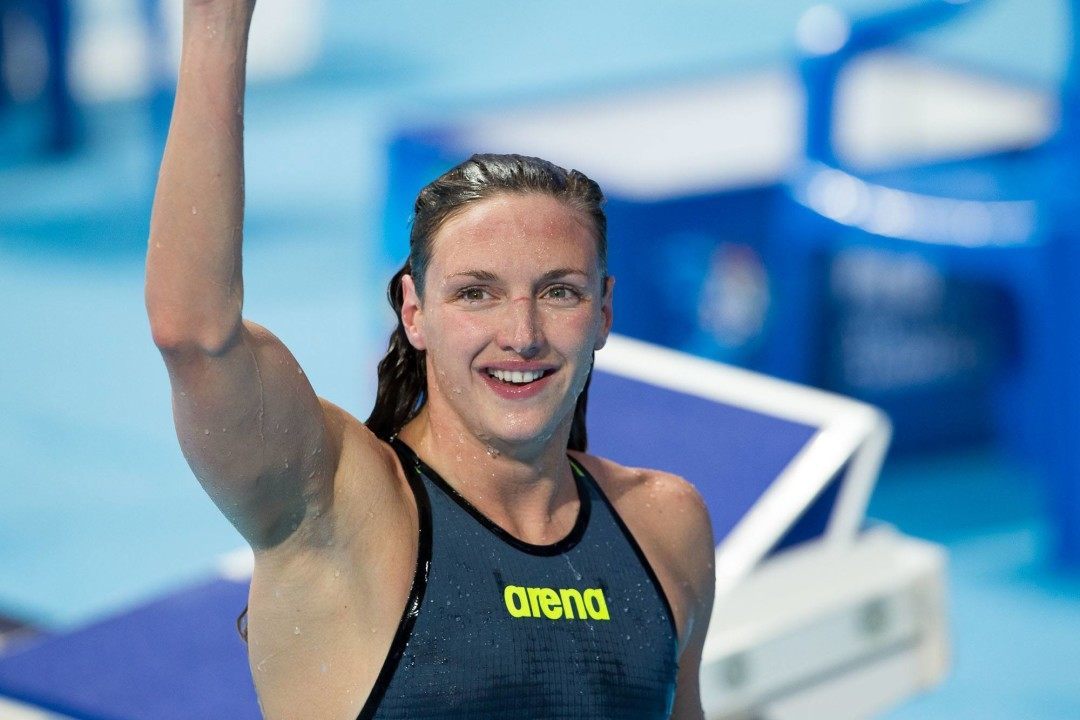 Katinka Hosszu, coming off a World Championship in which she swept the IM events, will be looking to keep her momentum going into the first stop of the World Cup tour this week. Current photo via Tim Binning/TheSwimPictures.com

The first stop in this year’s FINA World Cup circuit will feature a star-studded lineup, as many big-name swimmers will be extending their trip in Russia to take part at the meet in Moscow, which starts tomorrow.

Katinka Hosszu of Hungary, fresh off a world record in the 200 IM, is all sixteen events, which is pretty much normal for her.  On the men’s side, Hungary’s only representative is David Verraszto.  He picked up the silver medal in the 400 IM in Kazan.

Three of the four men who led France to their second-consecutive world championship in the 4×100 free relay are also schedule to stay in Russia for this meet: Fabien Gilot, Jeremy Stravius, and Mehdy Metella.  They’ll also be joined by Camille Lacourt, the gold medalist in the 50 back.

Like France, most of the big names from Russia’s team are slated for multiple entries, including all of their silver medal-winning 4×100 free team: Vladimir Morozov, Nikita Lobintsev, Andrey Grechin, and Alexandr Sukhorukov.

Australia’s breakout star, Cameron McEvoy, is not sticking around for the World Cup stop, but Emily Seebohm, who swept the 100 and 200 backstrokes against the likes of Hosszu and Missy Franklin, will be making an appearance in Moscow.

China’s Shi Jinglin, who part of a memorable three-way tie for bronze in the 200 breast last week, will headline China’s team.

South African swimmer Chad le Clos will be repeating his World Championships lineup: all three flies and the 200 free. Le Clos won the gold medal in the 100 fly and the silver medal in the 200 fly last week.

The team from the United States will feature several swimmers who won medals in Kazan, including Cammile Adams (bronze in the 200 fly), Chase Kalisz (bronze in the 400 IM), Tom Shields (gold in the 4×100 medley relay).  Despite having just competed in the 2015 USA Summer Nationals in San Antonio, Texas, Katie Meili and Josh Schneider also appear on the start lists for Moscow.  Meili won the national championship in the 100 breaststroke, and Schneider placed third in the 50 free.

Two years ago, the initial World Cup stops, coming like this one just a few days after World Championships, saw a host of world and national records go down, including Hosszu setting the 100 IM record multiple times.  While the 2013 edition of the World Cup was swum in 25m pools, this year the events will be held in 50m pools, as athletes hone their racing skills in preparation for next summer’s Olympic Games in Rio.

Entry lists can be found here.

Hoping to see Manaudou for the world cup, unless he just wasn’t mentioned, but still a very good line up.

And why hiromasa fujimori is listed as having a 200 IM time of 1:54.00, which is lochtes world record is beyond me, can someone explain this?

All the Australians at uni have got to get back asap. Ppl forget they have to do this every year – missing up to a month . If they are still at school it is even harder with looming public exams . Ihave never known any tutors taken along , though they roundup some dreadful ex school teacher coach ..

Poor Ian Thorpe had Don Talbot looming over his shoulder whilst studying .?

I think many of those mentioned above were no shows. Very poorly attended