Allison Schmitt Back on Campus in Athens 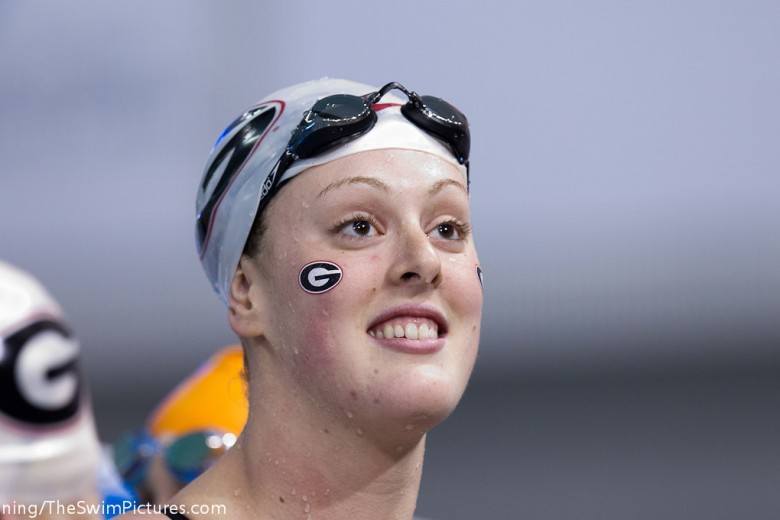 Clearing up any lingering doubt as to what her swimming plans would be after winning 5 Olympic medals, three of which are gold, Allison Schmitt is officially back in class at Georgia and preparing for the next NCAA season. This is after sitting out last year to train with Michael Phelps and Bob Bowman in North Baltimore for the Olympics.

From those we’ve talked to in the Georgia program, this was always the plan for the 200 freestyle Olympic champion, but three Olympic gold medals always add a new wrinkle into the equation. Now a reality, the Bulldogs will have the three fastest 200 freestylers in the country next season. That includes defending NCAA Champion and U.S. Open Record holder Megan Romano, the aforementioned American Record holder in long course Schmitt, and Shannon Vreeland, who was 5th at NCAA’s last year and joined Schmitt on the USA’s 800 free relay in London.

There’s probably only three people who could break up a 1-2-3 finish for Georgia in this relay. One is Lauren Perdue, another member of that American relay at Virginia; she missed NCAA’s last season with a back injury but is clearly back to full strength. Another is Tennessee’s Lindsay Gendron, a rising junior who is fantastic in yards. And the third is head coach Jack Bauerle, if he decides to spread the talent around, though that’s probably unlikely.

Think about how stacked that relay will be next season. They’ll likely have the first swimmer, if not the first two swimmers, in history to go a 1:40 individually; a third in Vreeland who should be right on a 1:41 or 1:42; and a slew of swimmers who were 1:44’s who will fight for the last spot. Even if Georgia had a horrendous NCAA Championship meet, they’d still break that record. They may even break it at a dual meet.

This incredible stable of freestylers, from the 50 to the 1500, makes Georgia the only real contender to knock of defending champions Cal this season.

Very good point SECSWIMFAN. Top 4? Have to believe at least 4 in the A-Final is a very good possibility.

They’re loaded in ALL of the freestyle events on top of the 200. Have to wonder what Cal is going to do with their relays, and if Georgia’s medleys are good enough to keep pace. Bears have lots of options.

Best of luck to Schmitt. She’s truly a gem: great swimmer and an incredible human being.

The Golden Bears have to figure out who to use for the fly on the medleys-Tran Bootsma, or Naze?

My guess would be they go bootsma-leverenz-tran-whoever. Tran took out her 100 fly at NCAAs in a 23.62 which is extremely fast for just a 50 even! Gotta believe she has more in the tank. Also Elizabeth pelton could take the backstroke spot, you never know. The dawgs 800 FR is going to be insane! Hopefully they can split well, they have the tendency to add from their individual bests on the relay. Romano-macclean-Vreeland-Schmitt should be the 4 girls…with dark horses amber McDermott and Melanie margalis. I think Georgia has a great chance of chasing the bears this season, especially with Allison schmitts development in the 100 free, and she also showed this year she can put up a great… Read more »

John – I think that looks about right on Cal’s 200 medley relay, assuming they save Pelton for the 800. I think the 400 could even go Tran-Leverenz-Bootsma-Pelton (who has a 48.2 in the 100 free). Or perhaps swap Bootsma and Tran (I’m sure we’ll know more about the relative strengths by then – afterall Bootsma hasn’t done much yards swimming in the last year).

Kinda surprised to see Cal favored over Georgia for the team title, personally think it’s the other way around, Froskies have to come up this year. Worked last year for the men, so we’ll see.

The 800 Free Relay is swum on the first night of the SEC Championships as one of only 2 relay only events in the program. Historically Georgia has set records in the 800 free relay at the SEC’s (even when they are not fully tapered) and not gone as fast at the NCAA’s where the event is swum at the end of the 4th session and the 3rd 200 for many that day. It might be interesting to watch what they do at Texas A&M in mid-February in this relay as it could be faster than anything the rest of the year.

I believe Jasmine Tosky went a 1:43.26 at her high school championships. She too might be able to squeeze into the top 3, pending her performance.