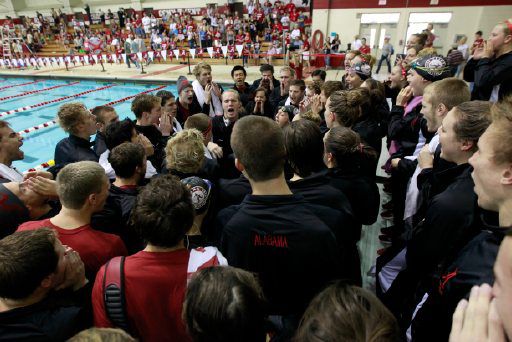 Western Kentucky butterflyer Hannah Musser will be transferring to the Alabama Crimson Tide, according to a source close to the team. Archive photo via Alabama Athletics

Western Kentucky butterflyer Hannah Musser will be transferring to the Alabama Crimson Tide, according to a source close to the team.

For Musser, that home will be Tuscaloosa, where she’ll instantly become one of the team’s top butterfly threats.

Musser had just wrapped up her freshman season at Western Kentucky, and her top 100 fly time would have made her Alabama’s fastest swimmer in the event by the end of the season.

As a sophomore next season, she should have a shot to score at SECs in both butterfly races – her times from last year would have nabbed points. Musser could also see her role expand in the 5-day SEC meet lineup, which would spread out what was a busy post-season schedule for her last year.

Musser will also take part in a new rivalry with her former WKU freshman teammate Haley Black. Black will be transferring out to Alabama’s bitter SEC rival Auburn. Black was 2nd at the C-USA meet in the 100 fly, just ahead of Musser, while Musser returned the favor in the 200 fly, where she finished 7th and Black 8th.