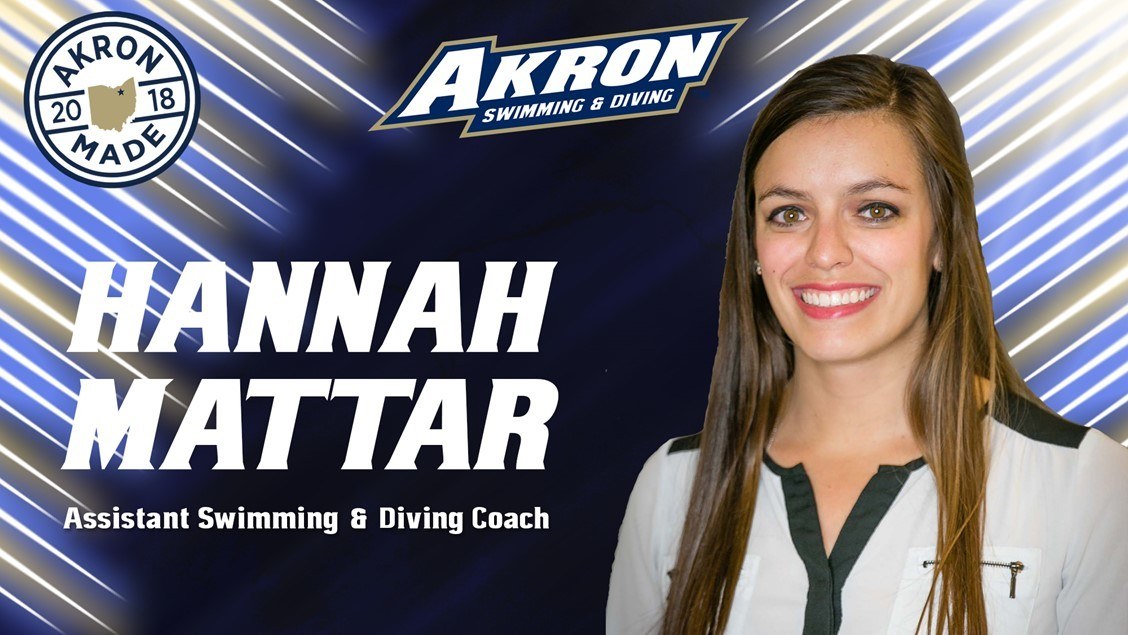 Hannah Mattar has been named the assistant coach for the University of Akron's women's swimming and diving team. Current photo via Akron Athletics

Mattar’s hiring is pending approval by the University’s Board of Trustees.

“Watching Hannah develop in her coaching career over the past year has been exciting,” Peresie said.  “She is a proven leader and will be an excellent role model for the young women in our program.  Hannah has a unique ability to connect with young people and bring out the best in them.  I could not be happier with her decision to join the Zips and look forward to working with her in the years ahead.”

“I want to thank Brian and the entire department for this opportunity!” Mattar said.  “I am extremely excited to continue my coaching career as a Zip! I am looking forward to contributing to the success of The University of Akron program. Brian and Chris (Medvedeff) have done an incredible job leading this team to five consecutive MAC championships and three NCAA appearances.  This is an incredible opportunity to learn, grow, and contribute to an exceptional program and University.  Go Zips!”

Mattar joins the five-time Mid-American champion Zips after one season as the assistant coach for both the men’s and women’s at Cleveland State.  She helped the Vikings to strong showings in the 2018 Horizon League Championships. The CSU women took third place with 586 points. The Cleveland State women broke school records in nine of the 18 swimming events at the 2018 League meet.  Mattar also helped the CSU men to a strong runner-up finish with 665.5 points in 2018, as the Viking men surpassed NCAA standards in eight different events at the league championships. Both the men’s and women’s point totals from the League meet were the highest in five years.

“Hannah Mattar is a rising star in coaching, ” said Paul E. Graham, Cleveland State head coach.  “She is very skilled in building relationships and loves seeing improvement in the athletes.  I am excited that she has this opportunity with the Zips to learn and grow.”

Mattar had a highly accomplished career at Ashland, not only as a student-athlete but also in her numerous other pursuits away from the pool.

Mattar was a 13-time All-American at Ashland as she qualified for the NCAA Championships in each of her four seasons. She claimed 11 individual All-America honors, including seven first-team accolades, and two as a member of a relay. Mattar was a three-time first-team All-American in the 200 breaststroke, finishing among the top four nationally on each occasion, and earned the same honor for the 200 IM and 400 IM two times each.

Mattar was named an Ashland Student-Athlete of the Year in 2015-16. She currently holds four school records—the 200 butterfly, 200 breaststroke, 200 IM and 400 IM. Her record time is more than five seconds better than the second-best performer in program history in three of those four events.

​​​​​Mattar also was a team captain at Ashland and earned the Most Inspirational Team Leader/Captain award at the athletic department’s end-of-year awards banquet.

​​​​Mattar is not the only swimmer in her family as her brother Tony competed collegiately and her sister Lydia swims at Saginaw Valley State University.

A native of Lake Orion, Mich., Mattar earned a bachelor’s degree in business administration degree from Ashland in 2016.