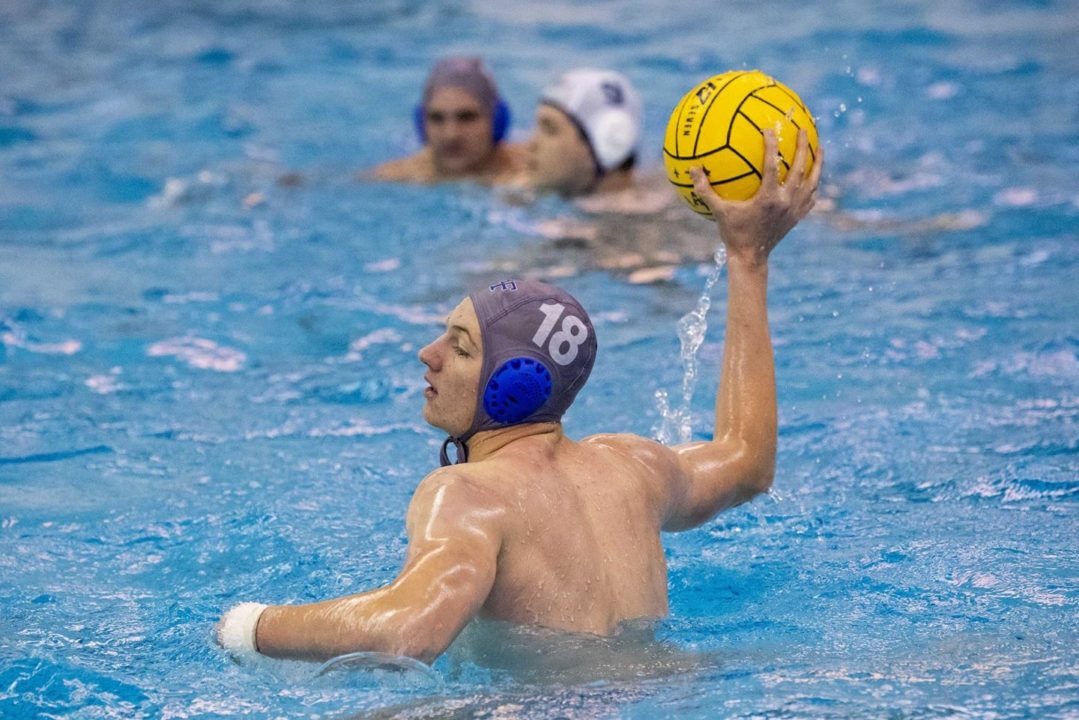 The Falcons and Lions will play a Western Water Polo Association game on Saturday before a non-conference game Sunday at the Burns Center in Los Angeles. Archive photo via Air Force Athletics

Following the Falcons: Both games will be live streamed on LMU’s Instagram page @LMULionsMWP. Live stats will also be available for both games on TheFosh.net. Links to both the stream and live stats are also on the Air Force water polo schedule.

About the Lions: Ninth-ranked LMU opened the season with a 13-7 conference win over No. 11 Cal Baptist, Jan. 23, in Los Angeles. Later that day, the Lions fell to Cal Baptist in a non-conference game, 13-11. Joseph Shaw and Jonny Rimlinger each scored five goals on the day for the Lions. Nicholaus Rimlinger leads the team with four assists in two games.

Series Records: Air Force and Loyola Marymount have played 63 times since the series began in 1980 and LMU leads the all-time series, 35-28. The Falcons have lost three straight to the Lions, including a 16-14 loss last season. Air Force’s last win came in 2017, a 12-8 win at the Academy.

Last season vs. LMU: LMU defeated Air Force, 16-14, in a conference game at the Academy last season. Air Force led the majority of the game and held a 13-11 lead with 5:57 remaining. The Lions scored four unanswered goals for a 15-13 lead late in the fourth. Luke Andres scored with 14 seconds left, but LMU’s David Carrasco sealed the game with a goal with one second remaining. Campbell Harris led the Falcons with five goals.

About the Schedule: Due to the COVID-19 pandemic, the water polo season was moved to the spring and began Jan. 23 on the road. Air Force has one home weekend, Feb. 13-14, against Santa Clara and Austin College. The WWPA Championships are set for March 5-7.

Last Week: Air Force opened the season with a pair of losses at fourth-ranked Pepperdine, 16-9 and 12-7, Saturday, Jan. 23, in Malibu, Calif. In the first game, the Falcons fell behind early but rallied in the fourth quarter. Air Force scored four goals early in the fourth as sophomore Alex Hirjoi netted his third of the game to cut the Pepperdine lead to 11-7. However, the Falcons could not get any closer. In the second game, Pepperdine scored the first two, but Snyder netted his second of the day with 52 seconds left in the first. Pepperdine scored the next three and held leads of 5-2 and 7-3. After forcing a turnover, Sam Fuller’s second of the game cut the Waves’ lead to 8-5 with 5:20 left in the third. The teams traded goals in the fourth as Snyder and Sebastian Sak scored for the Falcons.

Hat Trick: Sophomore Alex Hirjoi, who did not see any game action last season, netted a hat trick in his first collegiate game. Hirjoi, a utility player from Elk Grove, Ill., earned the start in his first game. He scored Air Force’s first goal of the game, and of the season, in the first quarter. After a goal in the second quarter, Hirjoi completed the hat trick in the midst of an Air Force run early in the fourth. In two games this season, he leads the team with three goals and four points. He is second on the team with seven shots and also had a drawn exclusion against Pepperdine.