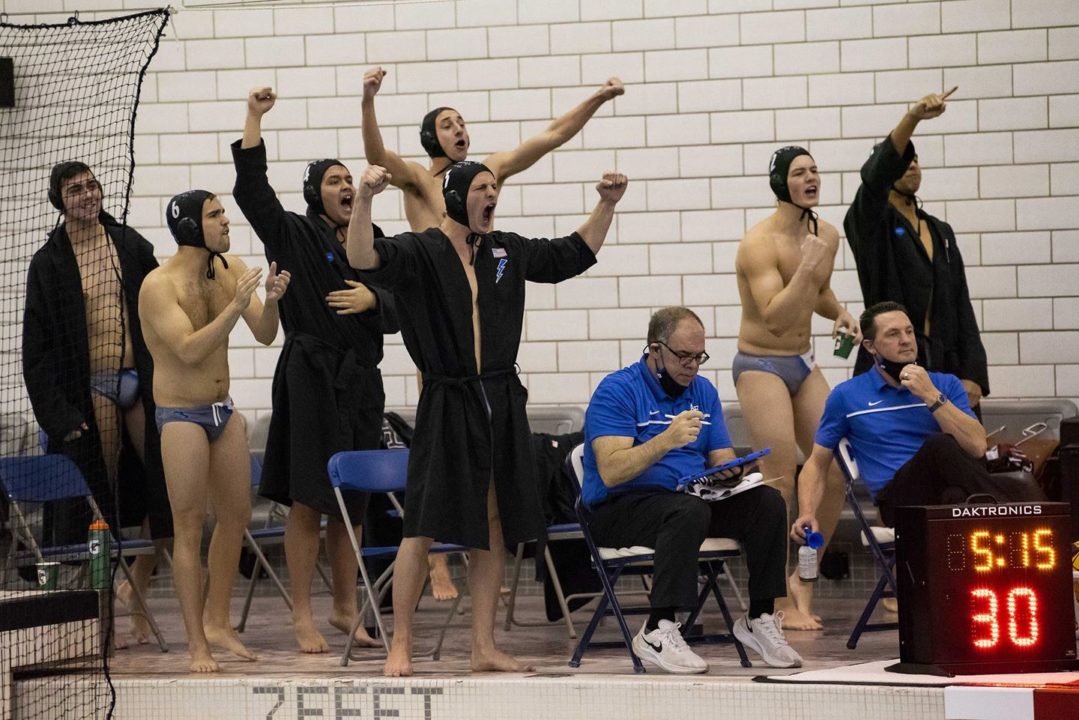 Air Force (4-4 overall, 2-0 WWPA) broke a 2-2 tie in the first quarter with three straight goals as Grant Snyder scored two and Gavin Jones had one. CBU scored the next two as Air Force had a 5-4 lead after the first quarter.  Goals by Campbell Harris, Sam Fuller and Grant Snyder on a five-meter shot gave the Falcons an 8-6 lead at the half.

California Baptist outscored Air Force, 2-0, in the third quarter as the game was tied entering the fourth. Hires, Fuller and Jones all scored in the fourth, but the Lancers answered every time as the score was knotted at 11-11 late in the fourth. The Lancers took a 12-11 lead, their first lead of the game, but the Falcons tied it as Campbell Harris scored with 52 seconds left. AF goalie A.J. Kuypers made a save with 30 seconds left as the game forcing overtime. CBU scored first, but Air Force answered as Jones tied the game at 13-13 with 32 seconds remaining in the first overtime period. In the second overtime, Henry Yavitt won the sprint and then scored on the ensuing possession for a 14-13 lead with 2:40 remaining. The Lancers tied it on their next possession, but Yavitt’s second of the period put the Falcons up 15-14 with 1:57 left.  Sam Fuller forced a turnover and then Kuypers made a save with 15 seconds remaining to preserve the win.

“It was a great match and both teams played well,” head coach Ryan Brown said. “Obviously we are super happy to come out on top and get that No. 1 seed. We had to deal with some adversity in the game. We had a lead and then they caught us went ahead. A credit to our guys as we are learning how to win games. A.J. (Kuypers) made some big saves for us and Henry (Yavitt) and Gavin (Jones) stepped up big for us at the end. We are in a good spot right now, but the work is not done.”

In the second game, the teams traded goals throughout with the Lancers pulling away in the fourth for a 17-12 win in a non-conference contest. Prior to the game, Air Force honored its six seniors. The seniors all started with James Burke starting in goal. Senior Jack Alexander opened the scoring for the Falcons and the teams traded goals throughout the first quarter. CBU led 6-4 after the first quarter, but the Falcons scored three in the second and trailed just 8-7 at the half. Senior Aiden Sandhu made six saves in the second quarter for the Falcons. Early in the third, Alex Hirjoi tied the game at 8-8, but the Lancers scored the next two for a 10-8 advantage. Senior Ian Shepherd scored with one second left in the third to cut the Lancer lead to 12-10. Kuypers was between the pipes in the third quarter and junior Anthony Tolbert manned the net in the fourth. CBU scored the first two goals of the fourth for a 14-10 lead. Campbell Harris scored twice for the Falcons to make the score, 14-12, but the Lancers scored the final three goals.

“We have to get better on the power play and they were great,“ Brown said. “They converted a ton. They were fantastic and we were not.  It was great to get all the seniors in the second game and they all played great. There was a lot of emotion in the first game with it being a conference seeding game and it went back and forth, but we needed to be better and sharper in the second game. We have to work on ourselves and we want to finish with a winning record at home. We still have a ways to go.”