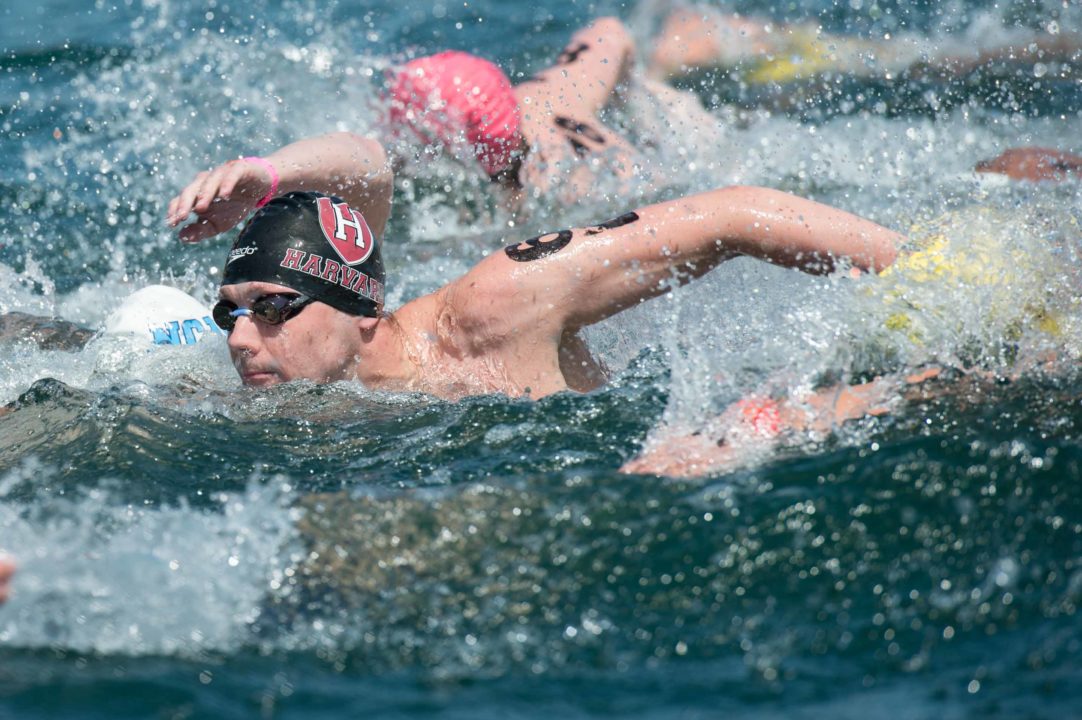 Alex Meyer has been one of the most vocal proponents of lowering the maximum water temperature for FINA open water events. (Photo: Mike Lewis/OlaVistaPhotography.com)

FINA has drawn their line in the sand, and placed their buoy in the water, and declared that the maximum temperature for FINA open water events shall be 31 degrees celsius (87.8 degrees farenheit). That temperature proposal will be presented to the Technical Open Water Swimming Congress on Wednesday.

The decision was announced today by FINA President Julio Maglione on Tuesday at the FINA Bureau meeting, as it follows a study at the University of Otago in New Zealand. The university collaborated with FINA, the IOC, and the International Triathlon Union to establish this figure, which is higher than the one that USA Swimming had already legislated for races 5km and longer at 29.5 degrees Celsius (85 farenheit).

Our open water expert Mike Lewis says that in his opinion, this maximum is still too high – a sentiment shared by a vast majority of the open water swimmers with whom he’s spoken.

See the video here where Lewis discusses with U.S. Open Water Olympian Alex Meyer that 31 degrees is too hot.

The mandated pool temperature for FINA meets is between 25 and 28 degrees Celsius.

The renewed on safety in open water races comes after American champion swimmer Fran Crippen died in a FINA race in Dubai in 2010, with the high temperature of the water being deemed one of the contributing factors.

It would be interesting to see how that study was conduted and what the results actually were. It may be time for the Open Water swimmers to organize to get a more favorable maximum temperature. At this point FINA seems to thumbing their collective noses at the athletes.

I agree, where is the study? 87 degrees is way too warm. I trained for a week in a pool that was 88 degrees, the coach would have the kids take water and shower breaks every 20 minutes. I cannot imagine racing more than 200 yards at that temp.

It is kind of ridiculous that FINA is conducting a study revolving around only the water temperature. First off, as shown in US Coast Guard studies and studies by other life saving organizations, it’s the air AND water temperature combination that matters in terms of survivability at sea. To protect the athletes FINA should be concerned with both. Other factors that should be regulated are sea state, wind, and current. These are all easily quantifiable under current maritime standards and greatly affect the survivability of the swimmers if they are in distress. Of course the ultimate problem is profitability. FINA fears more restrictions will reduce the number of races, popularity , and ultimately the profitability. Hence they will do anything… Read more »

At the pool I swim in the water frequently reaches 90 degrees. We still go about our practices as we would any other day. However, I’m not so sure this is safe, as Fran Crippen died in 86 degree water. I agree that the limit must be lowered (probably to at or below 85 degrees, as the air temperature has to be factored in. A pool with 85 degree water would never be as hot in the air as an ocean race with the same temp).

On the general topic of water conditions for a 10K swim: Does anyone know whether the FINA 10K swim at Lac Megantic in Quebec, scheduled for August 10, is still on? That’s the place where that horrific train disaster happened just over a week ago. Aside from about 35 dead and a few more still missing, a lot of train car-loads of oil went into the water. Not to be callous about the tragedy, but does FINA have anything to say about whether they’ll do the swim?

Catherine – we will reach out and see what we can learn.

Catherine – SNC has not made a decision yet on the race, but we’ll be sure to have an update when they do.

So it’s Swim (Natation) Canada that makes the final decision, not FINA?

Don’t know for sure, but my guess is that SNC will have the heaviest say, as they’re closest to the situation. I’d guess the two sides will have some kind of consultation of some sort.

Over 30 degrees Celsius for such a long-lasting performance is very hot indeed. Apparently
FINA desires to leave the door open for having its meetings in certain wealthy oil-producing countries. 🙂

I was thinking the exact same thing, either the oil countries, or other countries with deepish pockets and in warm climes.