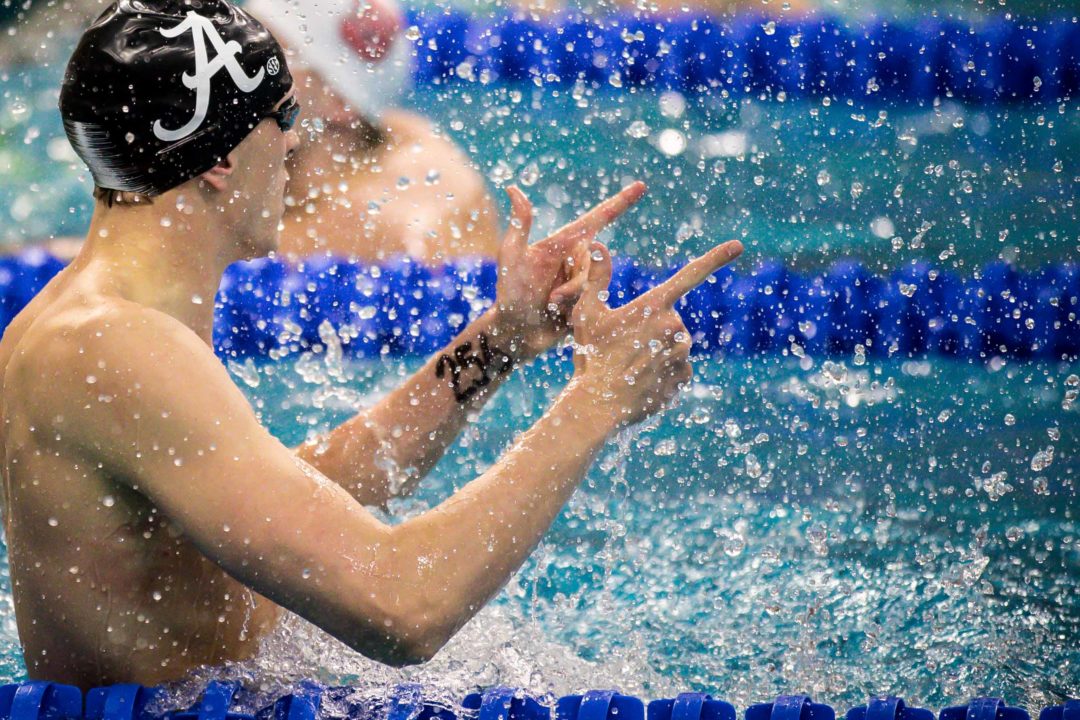 NCAA Champion and 2019 SEC Swimmer of the Year Robert Howard will join the DC Trident for their inaugural season in 2019. Archive photo via Jack Spitser/Spitser Photography

The DC Trident of the International Swimming League has added sprinter Robert Howard to their team roster for the inaugural season of swimming’s newest professional circuit. Howard’s announcement comes after the suspension of Brazilian sprinter Gabriel Santos by the ISL, which is expected to turn into a permanent ban in line with the league’s zero tolerance anti-doping policy.

Howard just turned pro in March after completing his final NCAA Championship meet. As a prep, one of the best in the state’s history, he trained with Auburn Aquatics based out of the University of Alabama before signing to join the varsity squad at Alabama, where he bloomed into an All-American.

Most recently, he represented the United States at the 2019 World University Games where he won gold as part of the American 400 free relay. As a pro, he’s followed his coach Jonty Skinner to Indiana, where he trains with Cody Miller, Zane Grothe, and Ian Finnerty: all of whom are also members of the DC Trident.

“I’m so excited to welcome Robert to our amazing roster of DC Trident swimmers,” General Manager Kaitlin Sandeno said. “From watching him throughout his career at Alabama, to most recently celebrating his success along with his new Trident teammates at the World University Games, I’ve gotten to know Robert as a swimmer. He is a sprinter through and through, and will surely thrive in the ISL which puts a premium on speed.”

Howard doesn’t have any official results in short course meters, the course that will be used in ISL meets. The Trident are scheduled to kick off their season on October 4th and 5th in Indianapolis, Indiana.

Don’t know how he didn’t get picked up earlier. He is definitely worthy of an ISL spot and will put up some big swims at Nationals this week!

I’m not inside the Trident war room, but I think the explanation is basically this: there are a LOT of 22-low, 48 male sprinters around the world. Tons of them. The signing period began before NCAAs. There are roster limits, so it can be hard to have “relay only” swimmers on the roster, and so I think early many teams were trying to fill those relay slots with swimmers already on their rosters, and the individual slots were probably filled before NCAAs. That’s just my hunch. More of a timing and roster limits issue than a “not having faith in Robert” issue. I agree though – the DC Trident got lucky that he was available to fill this spot. That… Read more »

That was kind of what I thought might have happened too. Quick question about the ISL. Are these swimmers signed to 1 year deals, and will they have to resign next year? It seems that if you didn’t get on a roster this year, it’ll be very hard to get on one in the upcoming years simply due to the fact that many teams already have an established team/a lot fewer slots available. And if they are on one year deals, does that mean the teams could be completely different in the following season?

I think it has to be probably. Then, that gives athletes the chance to retire when they want rather than after their contract has finished.

The Sheriff is in town

Speaking of the ISL, when are tickets going on sale?