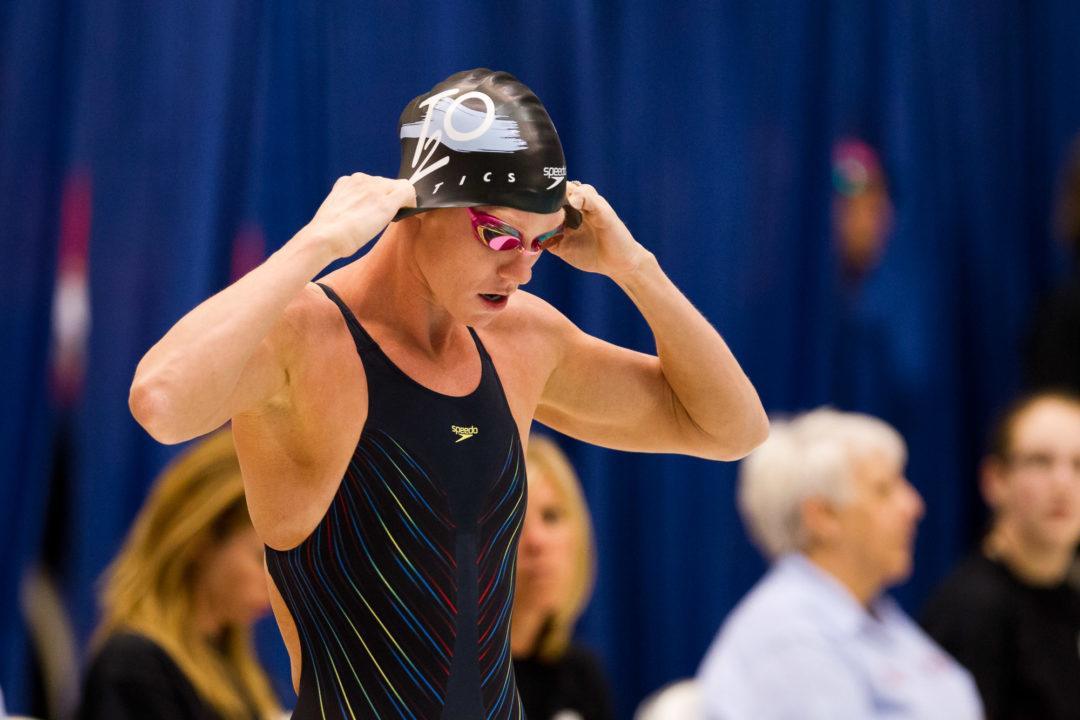 Four years after this photo was taken, Erika Erndl has qualified to race at the 2016 Olympic Trials, the 5th of her career. Archive photo via Tim Binning/TheSwimPictures.com

One day shy of her 38th birthday, T2 Aquatics swimmer Erika Erndl has qualified for her 5th Olympic Trials meet.

Swimming at the 2016 T2 Aquatics Norris Foundation Long Course Meet, Erndl swam a 1:00.94 in the 100 meter fly, which sneaks under the requisite standard of 1:01.19. That’s her first official Olympic Trials time during the qualifying period.

Unlike two of the other veterans who qualified for the Olympic Trials this week, Ed Moses and Kevin Swander, Erndl has been in training. According to her coach Paul Yetter, she does weights 3 times per week under the eye of Derek Touchette, and does 5 swims per week (Monday, Tuesday, Wednesday, Friday and Saturday). Yetter says that’s down from the 7 swims per week she was doing going into the 2012 Olympic Trials.

Erndl’s best time in the 100 fly is a 58.75 that she swam at the 2012 U.S. Open. Earlier in her career, she was primarily an IMer with a focus on breaststroke, and she qualified for the semi-finals of the 2000 Olympic Trials in the 200 IM. She returned to competition later in her career as more of a sprinter and butterflier.

Heading into the 2012 Trials, USA Swimming released its final list of qualifiers on this day, exactly, four years ago. At that time, a 33-year old Erndl was the 4th-oldest qualifier, behind Dara Torres (45), Janet Evans (40), Steve West (40), and Erika Braun (40).

Since her last Olympic Trials race, Erndl gave birth to her first son, Asher, in October 2014.