8 Reasons Why College Swimming Will Change Your Life 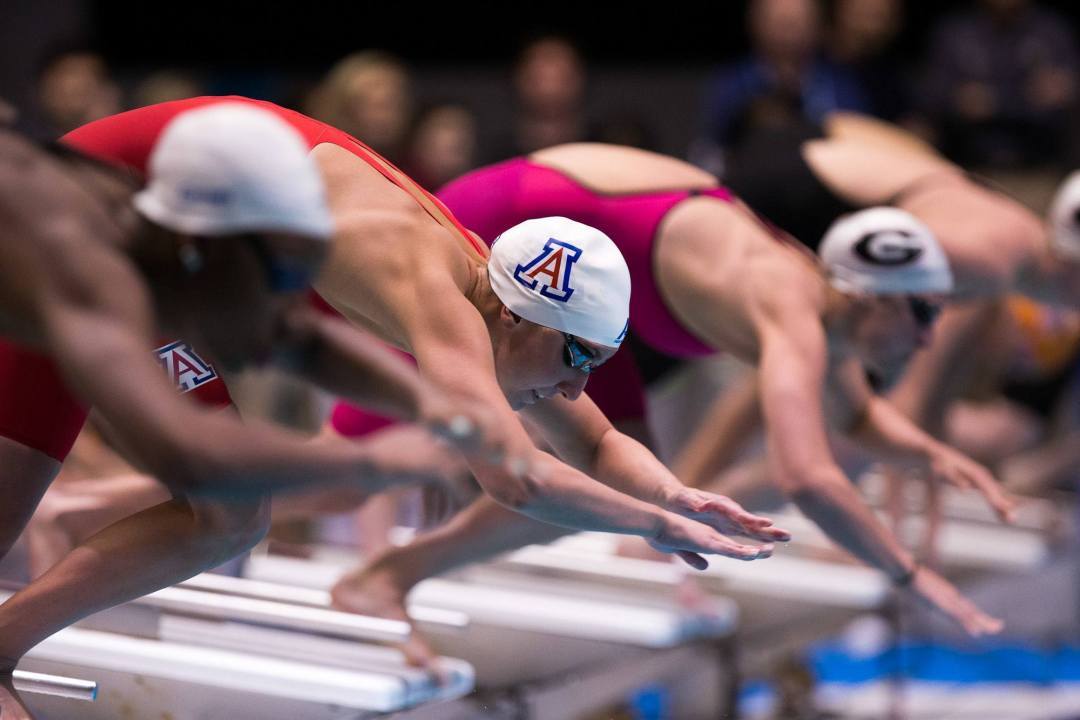 I think about my days with 59 men and women on the UA swim team at some point every day. Here are 8 Reasons Why College Swimming Will Change Your Life… Current photo via Tim Binning/TheSwimPictures.com

Arizona Homecoming happened several weekends back. I’m on the road to recovery. The weekend was exhaustingly fun. Aside from not getting enough sleep, the emotional high is what’s the most draining. So many of my Wildcat brothers and sisters came back into town. The numbers seem to multiply each year, as we become further distanced from college. The days everyone wants to relive. I recall my high school coach saying, “You have no idea how much you are going to love college swimming.” I remember being somewhat shocked at his willingness to basically say, ‘you think high school swimming is fun? Oh, you have no idea what’s coming.’ He was so right.

I think about my days swimming with 59 men and women on the UA (University of Arizona) swim team during some point of every day. We set out to win a NCAA title in 2007 and fell short. But in 2008, the women were out for blood and we willfully and decidedly won the team title. The guys competed the next week, and they were never going to be shown up by the women. They came home champs too. That was a magical era. SO many people SO driven to work SO hard to be the best. I’m not being pessimistic, only realistic when I say, I will never be a part of an environment as emotionally intoxicating and uplifting as the UA pool deck from 2006 to 2010. We were a group on a mission. Led into battle by passionate coaches who each took the reigns in their own effective ways.

Free gear. Ana (my roommate all 4 years and MOH) and I carefully laid our issued Nike gear out on our dorm room floor and took in the beauty of free stuff. We proceeded to take photos and post them for our non-athlete friends to envy. And this was only year one. Imagine the stock pile we’ll have after four! Sadly, it’s not a lifetime supply, as I had thought. Only ragged leftovers remain. So, enjoy it while it’s fresh, young’uns!

Leadership exposure. I looked for it on my recruiting trips and I could tell Arizona’s swim team was not lacking in the leadership department. There were some scrappy chicks on this team, ready to lay down the law in the pool. I loved swimming with these tough gals (i.e. Lacey Nymeyer & Whitney Myers), who knew exactly what they wanted out of the season and would let nothing stand in their way.

So many dads! Frank Busch, Greg Rhodenbaugh and Rick DeMont were all coaches and dads. Between the three of them, they have 16 children (Rhodenbaugh takes the cake with 8 kids). Those fatherly qualities were an immense comfort to me in college. I cannot forget Augie, Frank’s son, who was our hilarious sage of a big brother. In a time-consuming sport like swimming, the character of your coach is of pinnacle importance. These guys are all men of character with experience passing that on to the youth in their life. I am so grateful for the nourishment and paternal love I felt from all of them.

Best. Shape. Of. Your. Life. School is a great distraction to make you feel like you have more time than you do between morning and afternoon practice. I had six hours between my two hour morning workout and my two and a half hour afternoon session. Retired me realizes the seriousness of this training schedule. Not one time have I worked out for four and a half hours in one day since hanging up the goggles. Most people would say it’s lunacy. We say, nah, just swimming and proceed through college in a state of fatigued delirium. Appreciate the tone while you’ve got it!

Developing the Iron Mindset. I was continually having to find a new gear throughout college. I remember my first week of practice. I would call my parents and give them a way-too-precise description of practice (2 miles followed by 10 stadiums. Then we did 10x300s and tomorrow we’re max squatting). I was saying it aloud because I could not believe what I was doing. The first 2 p.m. August run I went on I kept looking around to see if anyone was surrendering to the 110-degree heat and walking. Not one. Not an option. The soles of our shoes were melting and our vision was doubling, but we all kept running.

Goal Meetings. My first goal meeting with the girls team left my adrenaline raging and my heart leaping out of my chest. These chicks were awesome. We took turns saying our individual goals and our team goals. I had always held my goals close in high school- like if I told someone, my wish would not come true. College taught me the more people know, the more likely it is to come true. You need your teammates to help you and hold you accountable. Then when you clench that goal, they celebrate with you, knowing they played a huge role in your achievement. How much sweeter it is to celebrate with you brothers and sisters than get to the top and be a lonely victor.

Relationships. Swimmers are the best people. It’s the honest-to-God truth. Sure, you must be a certain breed to talk yourself into swimming four hours a day when normal kids are participating in three sports at a time and still have more free time than you. Swimming is a sport filled with committers. It’s the perfect recipe for bullet-proof friendships. Everyone in the pool at a D1 college has learned how to devote themselves to their goals and their team. You sweat and bleed together in training and at meets, forging a fortified bond. Interestingly enough, all seven of my bridesmaids were swimmers…oh yeah, and my groom. I was determined to escape the aquatics world in my dating life, until I started to realize the fine crop that chlorine water grows. I found the love of my life splashing around in that UA pool.

The lessons. In a way, I was an infant before college. I leaned on my parents far more than I would have liked to admit as an independent high school girl. I could not hear my mom’s voice on the phone my first two weeks of college, because it made me cry! I missed my mommy and daddy. As a collegiate, I learned to budget my time, to nurture and nourish my body, to be a good teammate and leader, and to chase goals with fervor. Also things as humdrum as doing laundry and delegating house chores without stepping on toes. Swimming on the same relay as a girl you had just been in a screaming fight with taught me to forgive and move forward. Refusing to listen to your body’s cries during a duel meet versus Stanford or Cal (which always came down to the wire) taught me how muscly the human mind can be. We had an oar in the locker room that symbolized the weight we each carried. As long as we were rowing in harmony (not creating turbulence or failing to carry our weight), we were unstoppable. Confidence. The individual power your teammates bring out of you is frightful.

Annie Grevers (Chandler) is a Texan and an Arizona Wildcat. She is a former professional swimmer and NCAA Champion. A woman of faith, with a heart to love and to serve, she coaches swimming and writes with an insiders point of view and wisdom about our sport.

You can see her HQ here.

Annie’s post originally appeared on her blog, and appears here with her approval.

not at my old D3 college it wasn’t top tier d3 either, especially not the “free gear”. The relationships were ok, but many kids were there to have fun after high school (drink a lot), and were not fast. at all. and many of them would quit after a year or 2.

That’s kind of a bummer. As someone who probably wouldn’t even have a shot at top-tier D3, I wish there was a way to have the experience with a committed and serious team.

There is a lot of disparity at the DIII level, but there are a lot of great coaches out there who teach the same values mentioned in the article. DIII is about shopping around and getting to know the coach and the team. I coach at a lower tier DIII school and the above reasons would apply to my team (minus the amount of free gear). It takes a little more work to recruit the right kids to the program and sometimes the depth of talent is not there, but the dedication and devotion to the team and each other is. We are not always winning championships but we are giving to each other so that we each can elevate… Read more »

Well said. I was one of 19 freshmen on the 1974 UofA WAC championship team. Coached by Bob Davis. Not a day goes by that doesn’t include a note or call to at least one of my UofA team mates…these long 40 years gone by!

This is, hands down, my favorite article of this past week. 🙂