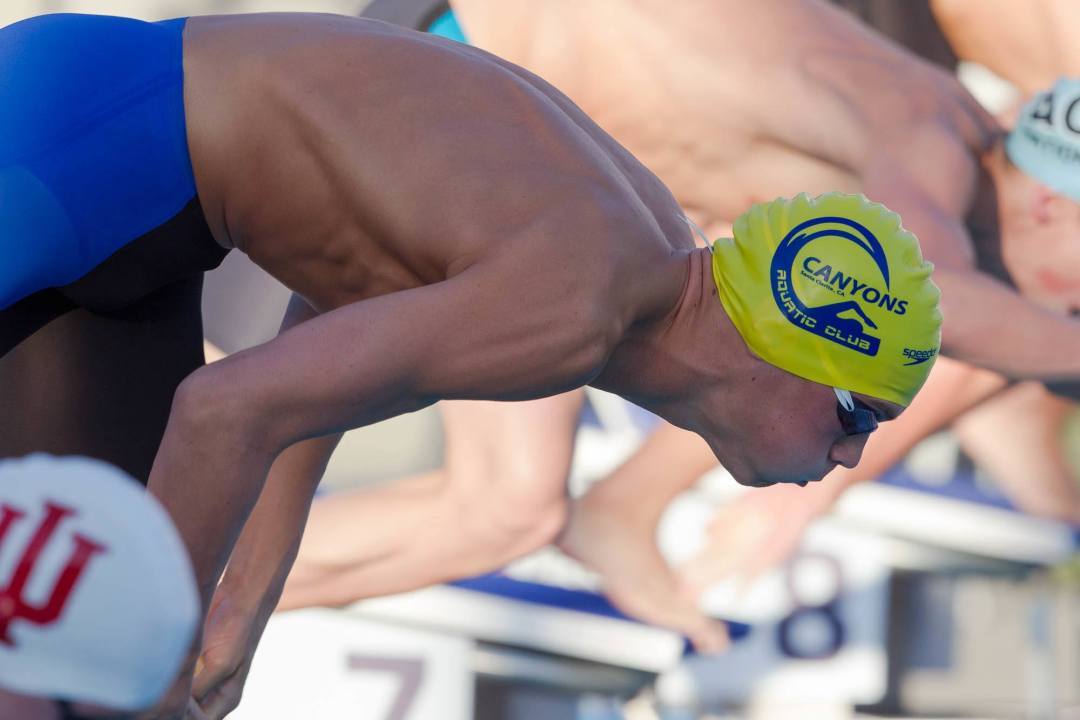 Cole Cogswell from the Canyons Aquatic Club, the 7th-ranked recruit in the class of 2015, has committed to the Stanford...

Cole Cogswell from the Canyons Aquatic Club, the 7th-ranked recruit in the class of 2015, has committed to the Stanford Cardinal.

Cogswell was one of just two members of our top 20 who didn’t publicly commit prior to the early signing period earlier this month.

He is a primo sprinter, which will put a cap on the rebuilding of the sprint group that Stanford showed off last weekend at the Art Adamson Invitational. In yards, Cogswell’s bests are:

His senior season is already off to a strong start, having already been 21.1/46.0 in the two sprint freestyle events this year, plus a near-best of 50.89 in the 100 back.

Cogswell has been at Canyons since he was 8 years old, and while he was a very good sprinter (22.20 already at 15) before Coley Stickels took over the program, he has thrived under the new staff – similarly to his teammate Abbey Weitzeil. After Stickels took over in late 2012, Cogswell dropped a second-and-a-half in the 100 free in just the second-half of his sophomore season, and another two as a junior.

Cogswell is the defending CIF Southern Section Division I Champion in the 100 free, where he’s well clear of all returning competitors this season. He was also 2nd last year in the 200 free at that meet.

Cogswell chose not to sign during the early signing period, which makes this a “verbal” commitment. He will have the opportunity to sign again on April 15th, 2015.

The lone remaining member of our top 20 who is uncommitted is #2 Townley Haas out of Virginia.

Congratulations to Cole. A fantastic addition to a great recruiting class at The Farm. Going to be a great 4 years continuing the tradition!

umm… yes you are looking at DIV 1. but lets not forget about the greatest CIF-SS/HIGH school/NCAA sprint freestyler of all time, Vlad Morozov?

I know the SwimSwam rankings are relatively new, but generally speaking, how (un)usual is it for a top-10 recruit to wait until spring to sign? Or in Haas’s case, to not even verbally commit at this point?

TheTroubleWithX – very unusual based on the last few years.