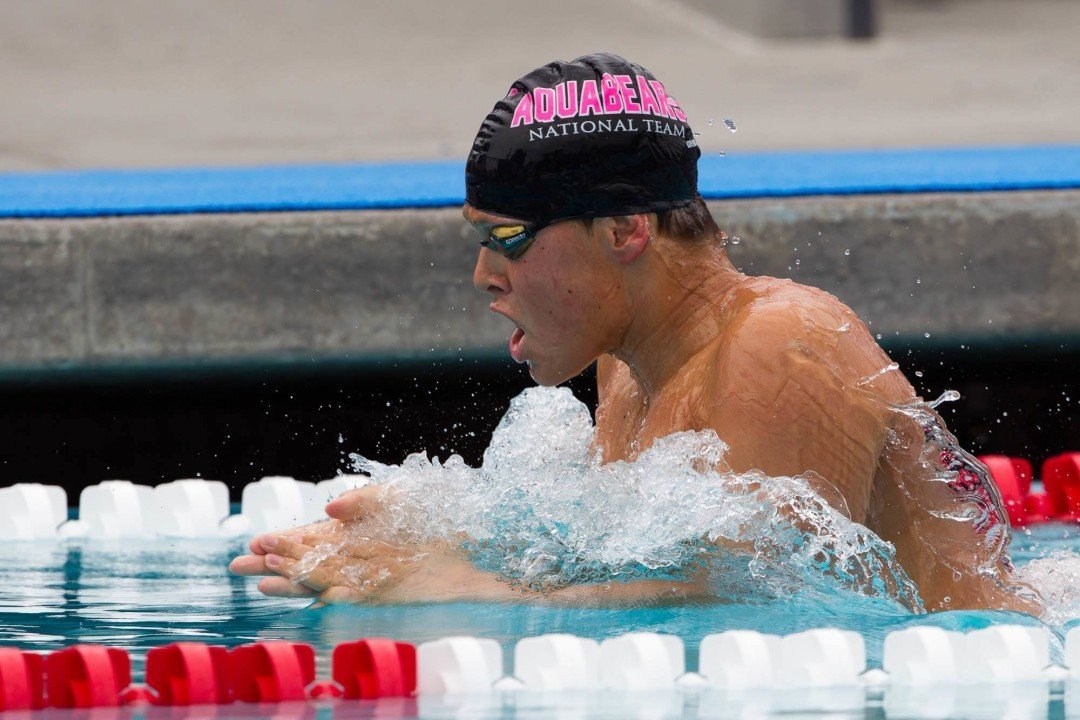 Hank Poppe will join his sister Heidi at Stanford in the fall of 2016. Archive photo via Tim Binning/TheSwimPictures.com

San Ramon Valley High School senior Hank Poppe has verbally committed to the Stanford Cardinal, which should give Ted Knapp’s program some stability in the breaststroke group that they’ve lacked over the last two-to-three seasons.

He will join his older sister, Heidi, in Palo Alto in the fall of 2016, which will be shortly after she completes her sophomore season for the Cardinal women.

Hank, like his older sister, is primarily a breaststroker, with yards bests of 54.35 and 2:02.00 in the 100 and 200, respectively, both of which came in the second semester of his junior season. He doesn’t turn 17 until November, which makes him one of the youngest swimmers in the class of 2016, but he’s also one of the biggest.

Poppe hit a growth spurt in the last year, and now is almost 6’7″ tall and north of 200 pounds. This puts him in the prototypical mold of the modern elite breaststroker – where the trend is toward taller swimmers (Breeja Larson, Kevin Cordes). While he’s still taking some time to adjust his stroke to his new height, he’s still the second-fastest 100 breaststroker in the class of 2016.

The Cardinal last season had three underclassmen go around 54 seconds in the 100 breaststroke, led by Christian Brown in 53.88. That ranked him just 16th in the Pac-12, though, and he will be graduated by the time Poppe arrives, which will leave the door open for Hank to battle with class of 2015 commit Matthew Anderson (53.53) for medley relay spots.

He’s also a 1:03.90 in the 100 long course meters breaststroke, and while his 200 hasn’t been as good (2:23.19 best), he hasn’t swum it as much either. He’ll be shooting for his first Olympic Trials qualifications at next weekend’s Junior National Championships.

Great way to start off the Cardinal Recruiting Class 2016. Congratulations to Hank and the Cardinal. With 2015 recruit Anderson at 6’5″ they are a pair of the taller breaststrokers of recent classes and these young men continue to improve on their times. Considering the height trend, maybe they will get a 6’8″ breaststroker in a couple of years.