The German national team is training at the Gloria Sports Arena in Turkey to prepare for the World Championships. Current photo via DSV

The German Swimming Federation (DSV, dsv.de) published a press release about the training of the German national team in Belek, Turkey. German National Head Coach Henning Lambertz draws a positive interim conclusion: “Here in Turkey all athletes are in good shape, there are no absences due to illness. The tests – whether sprinting or long distance – went well. We hope that we can take the good form from here to Kazan, “said Lambertz . He is also enthusiastic about the training conditions at the Gloria Sports Arena in Belek: “The conditions here in the Gloria Sports Arena are world class. I think this is the best sports complex which is available throughout Europe.”

You can read the full press release, in its original German, here.

The DSV team has trained since July 15th in Turkey, and on Wednesday the first open water swimmers flew from there towards Kazan. The first pool swimmers will arrive in Russia on July 27th, according to the DSV website.

Also, two-time German Olympic champion Britta Steffen expressed her optimism about the team in an interview with “Hessischer Rundfunk, saying “I believe that the opportunities are actually not so bad. Despite the greater international power density, I think, medals are possible in addition to final places. Right now I’m very positive.”

Steffen herself won’t attend the World Championships in Kazan from July 24th to August 9th. She retired from competitive swimming in 2013 and plans to take a vacation after the World Championships with her boyfriend, Biedermann. The 31 year old Steffen has a degree in Industrial Engineering and now studies Human Resources Management. At the Berlin Fashion Week 2015, held from July 7 to 11, Steffen walked across the cat walk for the German fashion label “Tulpen” – where she presented a glamorous wedding dress. But of course the German fans would prefer to see the prominent swimmer couple getting married someday in real life. 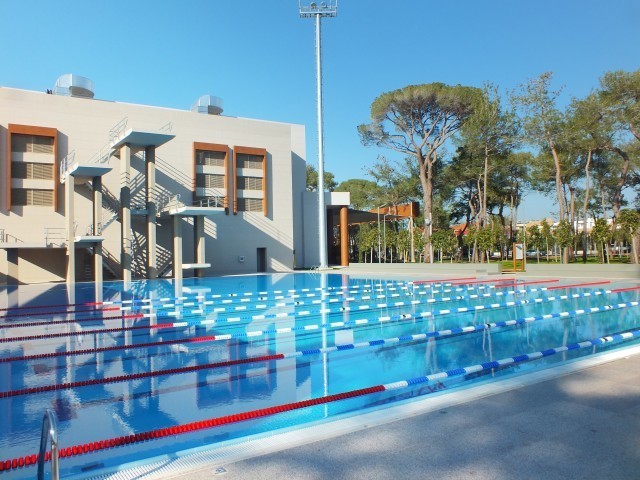 We can see all the German rigor in that team photo.

By the way that’s really a great sports complex there. Beautiful photos.

YES you are right … The photo really shows a lot of the famous German precision and thoroughness ;-). I hope they will get this into speed in the Kazan pool!