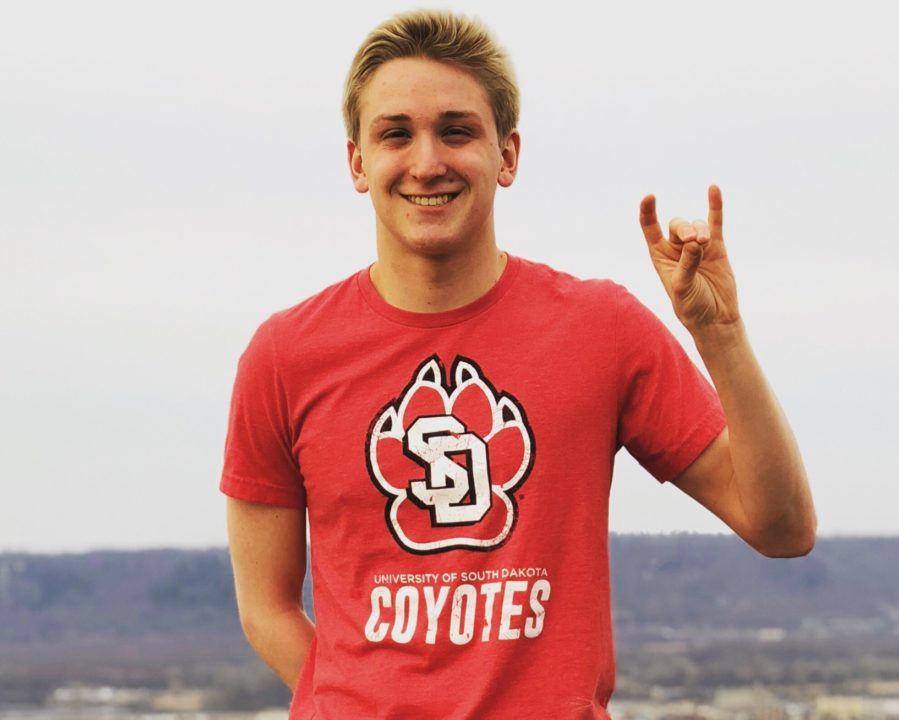 Griffin Wolner of Winona Senior High School and Winona Swim Club has committed to swim for the University of South Dakota in the fall. Current photo via Chris Mayer

Griffin Wolner from Winona, Minnesota has signed an NLI to swim at the University of South Dakota Coyotes Swimming and Diving Team and will begin his freshman year this fall. Wolner is a versatile swimmer who should be an immediate-impact player from his first days on campus, given that his best times would have placed him squarely in the A-finals of the 200/500 free and 400 IM at 2018 Summit League Championships. His 100 fly would have scored in the B final.

“It feels great to officially sign with the University of South Dakota! I love the small-town feel and the beautiful campus! The coaches and athletes made me feel like a welcomed and valued addition to the team and I look forward to training and competing with them this fall. Thank you to my parents, my brother Grant, my sister Harper, my current teammates, and my coaches! Go ‘Yotes!”

A senior at Winona Senior High School, Wolner swims for the Winhawk under head coach Chris Mayer. He is a 6-year letter-winner, a 5-time Big 9 All-Conference recipient, a 3-time All-State honoree, has 3 individual state titles and was a member of 2 state-champion relay teams. He also swims for the club team Winona Swim Club.

Coach Mayer told SwimSwam, “Griffin has been a beacon for both programs and he has reinvigorated the competitive fire on a Winhawk boys team that has continually improved each season since his 7th grade year. That team in 7th grade won one dual meet, in 8th grade it won 2 meets. By the end of Griffin’s freshman year the team had finished 28th in the State. His sophomore year the team moved up to 15th in State as Griffin placed 5th in the 200 Free and 2nd in the 500 Free. His Junior year, he led the team at State by winning the 200 and 500 Freestyle and anchoring the 200 and 400 Freestyle relays that both placed in the top 8 in the State. The team tied for 5th place, the highest team finish since 2000 and this was also the first State Champion for Winona since 1987. This year as a senior, Griffin set numerous meet and pool records, etched his name on 3 individual school records – 200 Free, 100 Fly, 500 Free – and was a member of all 3 relays that established school records. At State he won the 200 Freestyle, was 2nd in the 500 Freestyle, and was a member of both the 200 and 400 Freestyle relays that won State with All-American Consideration times. His stellar performances and leadership helped the team to a 2nd place finish at State, a feat that Winona had not achieved since 1956. These senior year accolades were all accomplished while Griffin dealt with a horrible case of Mononucleosis that was diagnosed on Christmas Eve. Griffin only missed two meets but swam each day, showing his never-ending commitment to his team and teammates. He will leave as the most decorated swimmer in school history but will be better known as a true leader, a humble competitor, and a great teammate.”