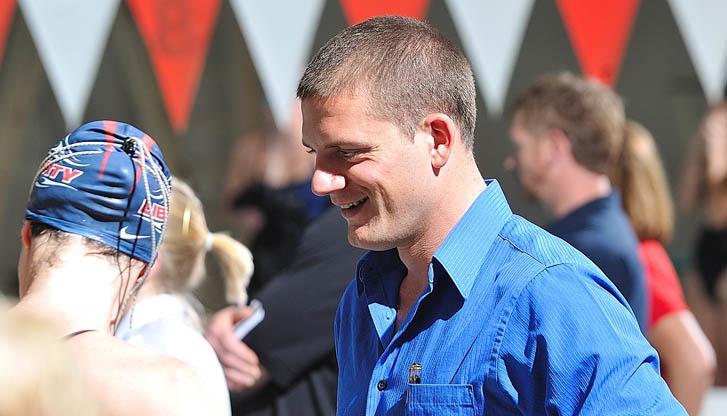 Liberty coach Jake Shellenberger has a great new breaststroker for his team beginning in the fall of 2014. Archive photo via Liberty Flames

Prudence Rooker, the 5th-and-final swimmer in an Oregon swimming dynasty, has verbally committed to the Liberty Flames.

Rooker is a sprint freestyler, breaststroker, and IM’er who could stake a claim as the best freshman recruit in the history of the young Liberty program.

In yards, her bests are:

She is the 5th, and final, child of Greg and Vangie Rooker of Oregon to swim collegiately. Gabe is a sophomore at LSU, Sharon is a junior at Stevens, Jonathan swam at Kenyon, as did Daniel. Looking through the record book of their old club, the Forest Grove Swim Club, is actually pretty cool, as all five of them hold frequent spots on the team’s all-time top 10 lists.

Prudence now trains with the Tualatin Hills Swim Club; her breaststroke best times are all from her freshman year of high school, but she was the Oregon High School State Champion in the 100 breaststroke last year in 1:03.70. When she was really young, though, Rooker was immensely impressive. She was a 1:03.00 in the 100 yard breast at just 13, and ranks 23rd on the all-time USA Swimming 13-14 age group list in that event.

That’s what Liberty coach Jake Shellenberger will hope to recapture beginning next fall. It wouldn’t be the first time he’s accomplished that either; breaststroker Emilie Kaufman didn’t swim a best time in her two years at Rutgers, but then in her first season at Liberty in the 2012-2013 year, knocked a second-and-a-half off of her best time and took 3rd at the CSCAA Championships in the 100 breast (though her prelims time was the best overall).

Liberty actually took two of the top three spots in that race last year; Laura Day was the champion in 1:01.45.

We are really excited to have Prudence attend and swim for a quality school with great coaches in an up and coming Division 1 program like Liberty University. I have nothing but nice things to say for Jake Shellenberger in the entire recruiting process. He is candid about his approach and desires to build a contender. His leadership and school backing has produced excellent results in such a short time. Can’t wait to see what else will happen in the future.