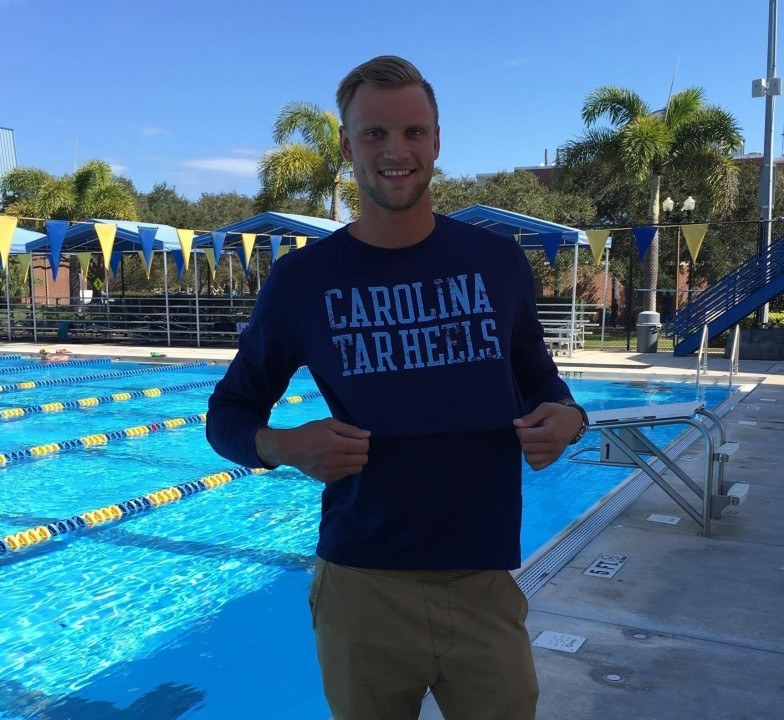 Craig Emslie, a sophomore at IRSC who is originally from South Africa, will swim for University of North Carolina in the fall of 2016. Current photo via Craig Emslie

Craig Emslie, a sophomore at Indian River State College, has made a verbal commitment to transfer to University of North Carolina in the fall of 2016. “I chose UNC not only for its outstanding swim program, but also for its excellent Business school and phenomenal team spirit.”

Emslie is from Cape Town, South Africa, where he attended Rondebosch Boys’ High School. He chose IRSC “because of its facilities and its reputation for producing many other outstanding South African swimmers,” Emslie told SwimSwam.

Emslie crushed the NJCAA record in the 100 breast this fall at the 2015 Georgia Tech Invite in November; his third-place finish of 52.77 was over 1.1 seconds faster than the previous national junior college mark. Emslie’s top times include:

Emslie will be a welcome addition to the Tar Heels’ roster; his best 100 breast performance would have scored second at last year’s ACC Conference Championships, while his 200 would have landed him in the C final.

“It took me quite a while to adapt to SCY, hence, my coach and I placed emphasis on my turns and under waters.

The Georgia Tech Invitational is where I knew I had the opportunity to shine out and set some personal bests. This is where I set a 52.77 in the 100Breast and 43.53 in the 100 Free. The team atmosphere was great and we all backed each other up in every race.

Although I’ve had some swims that I’m proud of, I believe it’s only the start. Currently I’m putting my head underwater in preparation for NJCAA and more importantly, South African Olympic Trials that will be held in April.”

How many years of eligibility would he have left? What a great addition to that team!

He should have 2 years left

Lol you’re an idiot, “shortcuts”, picking up a South African from a junior college where he developed into a better swimmer is a “shortcut” or is it an immediate impact signing that can help their 2/4free and medley relays. Trust me a lot of schools would have loved that shortcut for the fall

Great pick up by the Heels! They need more recruits like this to compete with that red school down the road

This is definitely concerning for NC State swimming, although we’re talented in other areas and have recruited some good breaststrokers, a strong, A-tier breaststroker has been a lacking point for the team recently.

“A rising tide raises all boats” JFK
As a former Wolfpack swimmier it’s good to see the ACC getting faster. It wasn’t much fun to watch NC State win all the swims last year … well, it was sort of fun

Well the Wolfpack just threw another punch back to the Heels by signing Zack Warner. 52.5, 1:55.4 breasstroker.