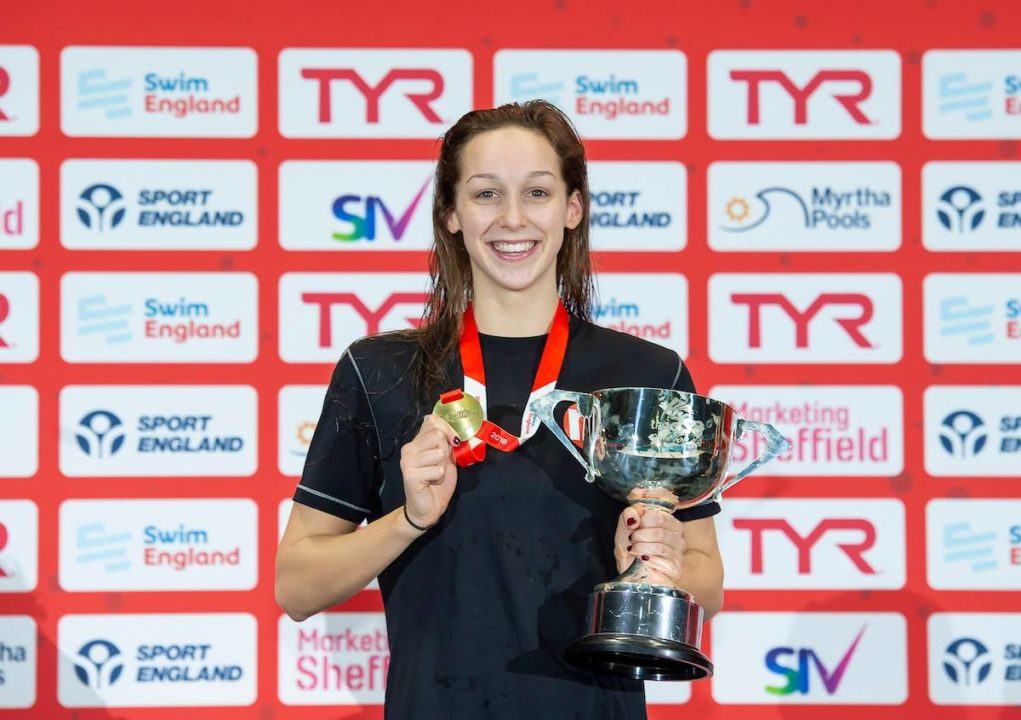 A handful of high-profile veterans and up-and-comers have turned some heads in having not been named to the British Performance squad for the 2020/21 season. Archive photo via SWpix/Swim England

Taking into account past performances, recent form, and the potential for success at short-term and long-term Olympics and World Championships, 53 men and women comprise the lineup for the nation that is typically a formidable force across the aquatic discipline spectrum.

As in the past, swimmers are designated as Podium versus Podium Potential, with both tiers receiving program opportunities and targeted support from UK Sport. Training camps and competitions are also part of the package, with world-class sports science and medicine services, as well as performance staff access attached to selection as well.

This season’s newcomers include Hector Pardoe, Emma Russell and Jonathan Adam. University of Stirling’s Cassie Wild is a returnee to the Podium Potential program.

In reviewing the rosters, however, notable absences remain among Great Britain’s elite, which necessitate a closer look. Below are just a handful of high-profile veterans and up-and-comers who may have turned some heads in having not been named to the squad for the 2020/21 season.

A stalwart of the British Swimming scene, 27-year-old Aimee Willmott is a two-time European Championships medalist and a two-time Olympian. She placed 7th in the women’s 400m IM final at the  2016 Olympic Games and followed that up with a gold medal in the event at the 2018 Commonwealth Games.

Willmott was the 2019 British Champion in the 400m IM, just her second such title since 2014, beating the next best swimmer by nearly 4 seconds. At the subsequent FINA World Aquatic Championships last year, the University of Stirling swimmer fell just shy of the 400m IM final, settling for 11th place in Gwangju, Korea.

Willmott is no stranger to funding alienation, as she was stripped of Podium status as of the 2018/19 season, just months after the aforementioned Commonwealth gold.

The London Roar does boast Willmott among its lineup for season 2 of the International Swimming League (ISL), therefore, she’ll snag the $15,000 minimum salary from that participation.

A stalwart Olympian who is synonymous with Scottish sport, Hannah Miley continues to persevere year after year in pursuit of her goals. The 31-year-old has finaled in the women’s 400m IM at the past 3 Olympics, with her most recent performance in Rio shutting her out of the bronze medal by merely .15.

Miley and Willmott have battled back and forth in both IM events, with the former having earned the title of British National Champion in 12 out of the past 14 years, save 2014 and 2019 when Willmott snagged the domestic gold.

Miley suffered an ankle injury in late 2018, but has been on the mend and heading towards her usual form ever since, capped by a milestone 4:39.00 4IM at last year’s U.S. Nationals.

Osrin made her mark in Kazan, Russia last year while competing at the European Junior Championships. She logged a lifetime best of 2:10.30 in the 200m backstroke to clinch the silver medal for Great Britain, with her time rendering the teen as the nation’s 14th fastest performer all-time at just 16 years of age.

Osrin came in 10th in the 2back event after the heats at the 2019 World Junior Championships but withdrew due to illness.

Already this year, Osrin took on world-class fields at the annual Luxembourg Euro Meet. The teen took bronze in the 100m back and silver in the 200m back.

21-year-old backstroke ace Chloe Golding has been on the rise in terms of improvements, especially when it comes to the 200m distance.

The City of Manchester star finally got back under the 2:10 threshold in the event after having done so for the first time back in 2017. Her 2nd occasion, which produced a lifetime best of 2:09.57 , brought along with it a bronze medal from the 2019 World University Games. That time also made Golding Great Britain’s 7th fastest woman ever in the 200m back.

At the 2019 British Championships, Golding finished runner-up to Jess Fullalove who just announced her retirement several weeks ago. That’s a strong indicator that Golding is in fact the heir apparent, but without the funding aligned with that position.

Like Willmott, Golding will reap a $15,000 figure as a member of ISL season 2 representing the NY Breakers squad.

What about Abbie Wood? Seems like a glaring omission. Jay Lelliott is another one potentially who has had his ups and downs, but is on the ISL roster this year and is very versatile.