"As a kid, I always smelled like chlorine. My hair and skin oozed chlorine." Current photo via Mike Lewis/Ola Vista Photography

FROM ANDREW CHADEAYNE: I have been swimming for thirty years.  Until last year, I spent almost every day of my life chlorinated – literally covered in a thin layer of chlorine.  Like our swimming heros, I thought that swimming required smelling like chlorine:

Recently, I solved swimmers’ chlorine problems.  Rinsing off with SwimSpray neutralizes chlorine immediately after swimming.  Presently, the only downside seems to be that it works too well.  Unfortunately, now some parents don’t believe that their kids ever got into the pool unless they “wreak of chlorine.”

As an age group swimmer, I swam at the Boys’ and Girls’ Club of Northern Westchester for the Marlins.  The Club provided a fantastic swimming program with only an old, 4-lane pool.  Notably, while there wasn’t much lane space, there was plenty of chlorine.

Even though I loved the smell of chlorine, I hated the effects of chlorine. I had dry, itchy skin and bleached, greenish, crunchy hair.  The barber would notice the smell right away.  “You must be a swimmer,” she’d say.

I tried all of the swimmer’s shampoos and later experimented with combinations of baking soda, soda water, beer, tomatoes, pickle juice, etc..  At one point I tried taking two showers after practice – one at the pool and then a second shower when I got home.

Nothing worked.  Eventually I simply gave up on getting rid of the chlorine.  I think I also became accustomed to having dry skin and dead hair.

When I first invented SwimSpray, I sent a case to my old coach, David Ellinghaus, at the Boys’ and Girls’ Club.  Later I called to see how the kids liked it. All of the Marlins agreed it worked.  Even the parents notice that they chlorine was gone.  One carpool mom accused her kids of skipping practice: “If you went to practice tonight, then why don’t you all smell like chlorine?”  I never saw that coming!

Parents – please rest assured that just because your kids don’t wreak of chlorine, this does not mean that they skipped practice.  With SwimSpray, swimmers can easily rinse the chlorine off after practice instead of walking around covered in it. 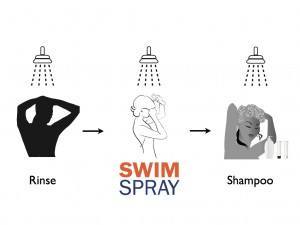 Just last night, my 8 year old daughter asked me what my favorite smell was. Without hesitation, I said, “chocolate.” She said, “Mine is the smell of the pool.” I said, “You are a swimmer, my love.” Enjoyed the article.

Wait, you don’t smell like chlorine anymore, Andrew? How will we recognize you? 🙂 The lake at our local rec center is chlorinated, I’ll definitely be picking up some Swim Spray for the kids this summer!

Thanks Christie – Glad you are doing well – As I recall, you were another early riser in high school: for skating. But, thankfully, you didn’t come to class smelling like it :-).

That’s right, 5 am skating practice before school! I didn’t smell like chlorine until after school when I was life guarding and teaching swimming lessons… but my hair felt like straw for years from it! :/ What a wonderful product you’ve developed, no one wants chlorine sitting on their skin and hair all the time…

I’ve known Andrew for a long time and couldn’t be more proud of him and his new company, SwimSpray. We first became friends growing up in the age group US Swimming circuit in NY and both finished our competitive swimming careers together at Princeton University as teammates.

It’s so fitting to me that he’d be the one to invent such a product that could completely remove such a common problem out of the equation for swimmers around the world in a safe and natural way.

Congrats to Andrew and his team for creating such an innovative product, I look forward to seeing continued success.

Thanks Dennis – I don’t think I would have ever made it to Princeton were it not for our rivalry throughout age group swimming!