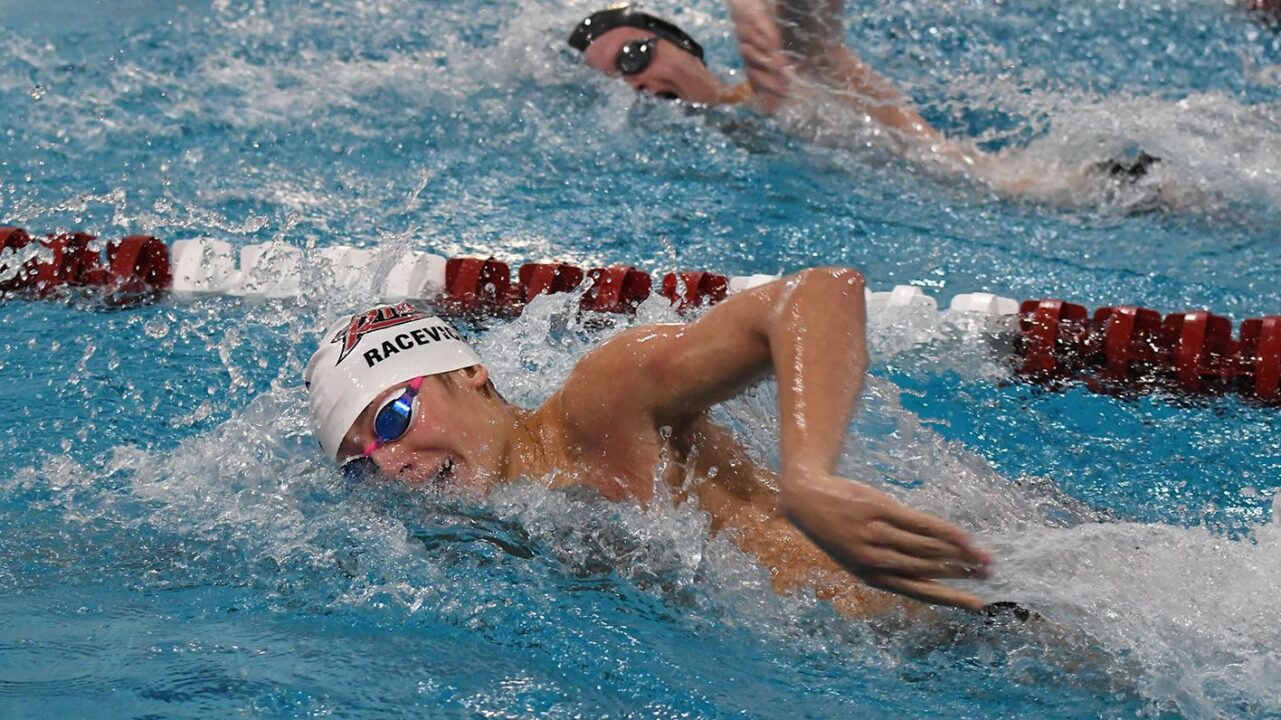 Rider's Lucas Racevicius will be a driving force as the team looks to win a 10th straight Men's MAAC title this weekend. Archive photo via Rider Athletics

The Metro Atlantic Athletic Conference (MAAC) Championships are back in 2022 after last year’s official competition was canceled due to the pandemic.

The conference ended up holding a 2021 ‘Spring Championship’ in late March with seven out of 10 MAAC schools competing, though some had only a handful of athletes and one raced virtually. Iona College came out on top for both men and women, but due to the circumstances of that competition, the Fairfield women and Rider men come into the 2022 championships as the defending champions from the titles they won in 2020.

Fifth-year senior Sage Pollack is a top-tier sprinter for Canisius on the women’s side, having taken second in the 50 free at last year’s Spring Championships, and Cara Smith comes having won the 1000 free last season. On the men’s side, senior Liam O’Connell holds a trio of top-eight seeds in the 200, 500 and 1650 free, while freshman Archie Minto comes in with plenty of upside holding the #5 seed in the 200 fly.

The three-time defending champion Fairfield women are headed up by stud freshman Erini Pappas, who is the conference’s fastest swimmer in the 400 IM this season and holds top-three rankings in the 100 back, 200 back and 200 IM. Pappas is the top seed in the 400 IM by over two seconds, and will challenge for the victory in whichever two events she opts to race.

On the men’s side, sophomore Alex Belfer is the top seed in the 50 free and second in the 100 free, while senior Evan Fair holds the top ranking in the 200 fly (1:49.89) and sits second in the 200 IM and third in the 100 fly. The men also have freshman Ed Hunt leading the 400 IM on the psych sheets, with teammate Joseph Stewart, the fastest MAAC swimmer in the event this season, opting not to swim the race.

Iona has the fastest female breaststroker in the conference in the form of sophomore Julia Moser, who holds a two-second gap on the MAAC this season in the 100 breast with her time of 1:03.34. She’s also the only sub-2:20 swimmer in the 200 breast (2:19.47).

The men are paced by defending 100 fly champion Conor Mullin and the top seed in the 200 free, Michael Faughnan.

Manhattan’s Teddy Segmuller has shown great improvement this season, and she and Mackenzie Tuttle should both challenge to get into the top eight in multiple events for the women.

For the men, Joe Brennan is the seventh seed in the 100 breast and is only two-tenths outside of the top four.

The Marist women have senior Victoria Stureborg holding top-five seeds across three events, including fourth in the 100 back and 100 fly, while sophomore Nellie Thompson enters the meet on a high after hitting a huge best time in the 100 free (51.97) earlier this season to rank fourth coming in.

The men’s team includes sprint freestylers Ahmed Sallam and Ethan McCormac, with McCormac also a title challenger in the 100 fly. Senior Adam Kapusta holds the #3 seed in both the 200 fly and 400 IM, while sophomore Chris Dauser is a podium threat in both breaststrokes.

The Monmouth women are stacked at the top, with sophomore Georgia Watkins, junior Alexandra Ho and senior Camryn McHugh combining to rank first across seven differents in the conference this season. Ho is the top seed on the psych sheets in the 50 and 100 free, Watkins holds the #1 ranking in the 500 free, 1650 free, 100 fly and 200 fly (though she’ll have to drop one of those), and McHugh is seeded first in both the 100 and 200 back.

On the men’s side, senior Callan Smith is the second seed in both the 100 and 200 back, while junior Blake Reynolds is locked into the top three in the 50 free and is one of seven swimmers entered sub-50 in the 100 fly.

Niagara senior Katrina Wardner comes in favored to win multiple events, holding the top seed in the 200 free and 200 IM, while also ranking inside the top three in a trio of other races. Her freshman teammate Kathryn Brady is in podium position in the 100 breast, 200 breast and 400 IM.

The men’s side is highlighted by junior Kevin Vu, who won the 50 free and took second in the 100 fly at the 2021 Spring Championships. Vu is seeded second in both of those events, and is also third in the 100 free. Sophomore Tanner Isaacs ranks second in the 100 breast, and freshman Nate Dragon is the #2 seed in the 500 free.

The Rider men appear well-positioned to win a 10th consecutive title with a slew of swimmers seeded atop their respective events coming in. Junior Lucas Racevicius is the top seed in four events (will need to drop one) and appears well on his way to multiple titles after earning two podium finishes two years ago as a freshman.

The team also has seniors David Cooper (100/200 breast) and Kyle Iorizzo (200/500 free) who are far and away the top seeds in their respective events, while freshman Nicky Lane leads the stacked field in the 100 fly.

The women’s side lacks the same type of firepower, with senior Kylie McMahon expected to be the top performer with #3 seeds in the 100 and 200 fly.

The Saint Peter’s squad is spearheaded by backstroker Natalie Davis on the women’s side and breaststroker Oleksiy Polishchuk for the men. Polischuk comes in ranked inside the top eight in the men’s 200 breast.

Siena junior Rory Kalac is right on the cusp of an ‘A’ final berth in the women’s 50 freestyle, while senior Izzy Harms leads what should be a great race for third in the 200 back, with swimmers ranked third through sixth also seeded at 2:05-something (the top two are at 2:00s).

The men’s 100 fly projects to be one of the best races of the meet, with the seven-fastest swimmers this season separated by less than half a second.

This has the makings for a tantalizing race, and all of the top contenders will need to be on their toes in the prelims with so many men tightly bunched at the top.

The women’s 200 free has a little bit of everything which makes it an incredibly intriguing race, at least on paper.

The field is led by Niagra senior Katrina Wardner, a St. Bonaventure transfer who is competing in the MAAC Championships for the first time. Wardner has been 1:51.93 this season to lead the conference, with her best time sitting at 1:50.11 from back in 2018.

Then there’s another conference newcomer in Fairfield freshman Sydney Scalise, who comes in seeded second at 1:52.84.

After that, we find the top three finishers from last season’s Spring Championships: Niagara’s Moana Houde-Camirand, Iona’s Isabella Nicholson and Monmouth’s Alexandra Ho. All three have shown marked improvement this year in the event, with Ho, in particular, having a standout season as the top seed in the 50 and 100 free.

If Ho uses her speed and takes it out fast, daring the others to catch her, we could be in for a barn burner.

Note: The Swimulator score includes swims from the entire season and doesn’t take into account if a swimmer isn’t entered or ends up missing the championships for whatever reason. In this case, Fairfield’s Eleonore Rembert, slated to score 48 individual points, is not entered in the meet.

With Fairfield missing a key cog in Eleonore Rembert, the women’s meet looks like it will be really tight and Niagara has an excellent opportunity to pounce. The Purple Eagles have never won the MAAC Championships, but might just be able to pull it out if everything turns in their favor.

Monmouth has the high-end talent at the top but not quite the depth to vie for the overall title, but looks solid in third.

On the men’s side, Rider towers over the field, with Fairfield looking like a safe bet for the runner-up slot and Marist, Monmouth and Niagara set for a great battle for third.

Who is just downvoting for no reason on this article?

This was a great read, reminded me of the past when collegeswimming had message boards and “MAACMAN” ruled the MAAC conference on coverage (those who know, know!) The MAAC has always been an exciting conference to follow, where did Niagara women come from?! Would be great to see them snag a title! Also I thought Iona would be higher on both sides but anyway, good luck to all MAAC Swimmers.

This is a great article! Thank you swim swam Well done. Good luck to all the swimmers!