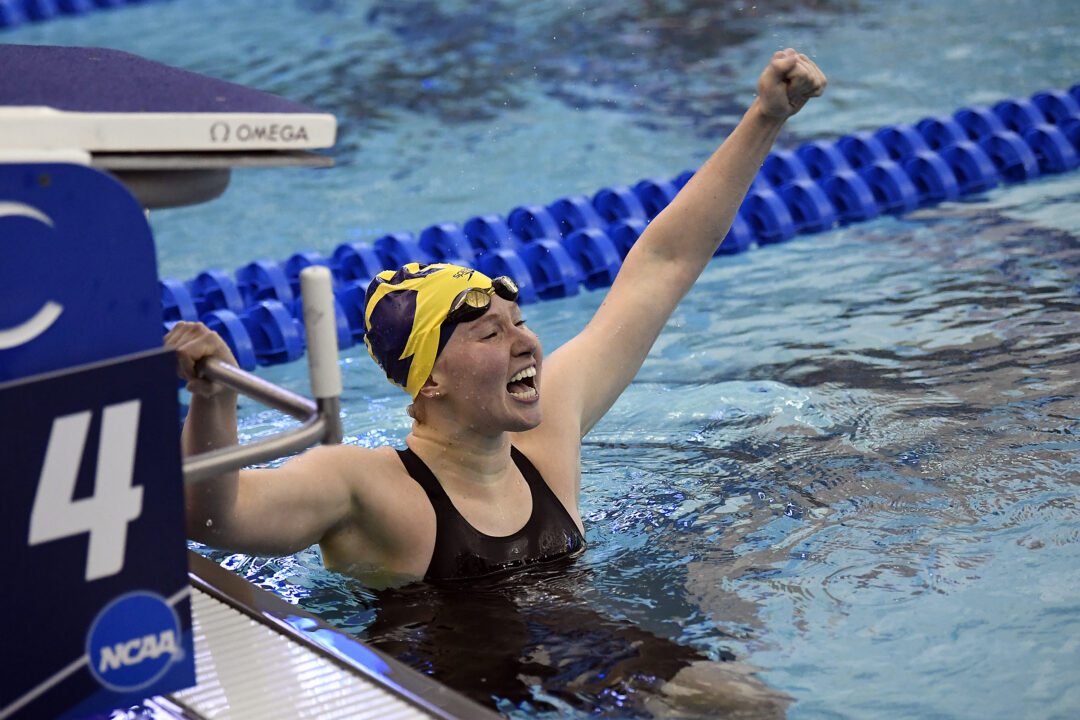 Carter, the 2021 NCAA champion in the 200 fly, decided not to use her fifth year of eligibility and instead wants to pursue a career as an airline pilot. Archive photo via Mike Comer

Olivia Carter, the 2021 NCAA Champion in the 200-yard butterfly, has announced her retirement from swimming. According to an interview with SwimmingWorld Magazine, she said that she plans on pursuing a career in aviation and eventually wants to become a pilot.

“I have always wanted to be an airline pilot. I have been around aviation for most of my life. I have been to a lot of races and got to race my own car this summer. I have a lot of other passions,” Carter said. “It was not an easy decision. This is the biggest decision I have made in my entire life. There were a lot of tears and talking with my parents.”

Carter swam for the University of Georgia in her freshman year and then transferred to Michigan, where she spent the next three years of her collegiate career. She had the option of taking a fifth year of eligibility but ultimately decided to move on from swimming. The last time she competed was in April 2022, when she swam in the U.S. International Team trials and finished fifth in the 200 fly finals.

“I made the decision over the summer. I was able to completely detach myself from swimming and my identity as a swimmer. I was able to get out of the country and find myself,” Carter said. “I have reflected on what I have achieved and what more I wanted to achieve. I knew I was not going to take a fifth year. I am graduating in December. I knew I would have to go pro to continue, but I really just decided I didn’t want to move. I have been able to do things that I am very passionate about outside the pool with planes and cars and racing.”

In her swimming career, Carter has had a considerable amount of success, especially in the 200 fly. As a freshman at Georgia, she claimed the SEC title in the event and then proceeded to finish seventh in the A-final at the 2019 NCAA Championships. Just from her first year, she dropped her best time from a 1:53.49 to 1:52.70. Then, in her sophomore season and her first year with Michigan, she went on to claim the 2020 Big Ten Title in a time of 1;53.28. That made her the seventh seed in the event headed into 2020 NCAAs, which were eventually cancelled due to the COVID-19 pandemic.

The highlight of Carter’s career came in 2021. She repeated as the 200 fly Big Ten champion, setting a new best time of 1:52.17. Then, at NCAAs, she won the event in a time of 1:51.33, a mark that was nearly a second faster than her Big Tens time. In fact, she dominated the 200 fly at NCAAs, beating out second-place finisher Olivia Bray by 1.53 seconds. Carter wasn’t done with success after her national title though, as she went on to threepeat in the 200 fly at 2022 Big Tens and clock a 1:51.19 to tie for second with Regan Smith at NCAAs. Her time from NCAAs currently stands as the Big Ten conference record.

Carter was also a formidable 100 fly swimmer, finishing as high as sixth place in the event at 2021 NCAAs, and setting her best time of 50.82 at 2022 NCAAs. She is actually the second-fastest Michigan performer in the 100 fly, only trailing NCAA record holder Maggie MacNeil.

Instead of swimming, Carter spent her summer this year around various different cars and planes. She recently posted pictures of herself on Instagram at the EAA AirVenture show in Oshkosh, Wisconsin, the Michigan International Speedway, and the Waterford Hills Raceway in Clarkston, Michigan. However, she’s still involved in the sport of swimming, as she is currently working as an assistant coach for Saline High School’s swim team, a school just outside of Ann Arbor, Michigan.

Carter says that she plans on starting flight school in February 2023, and wants to be employed as a pilot by the end of that year.

I can envision her competing at the Reno Air Races in years to come.

What an outstanding young lady. I’d fly with her

It’s gonna take at least a year and a half to two years to get her instrument ratings, her commercial license, and the 1500 hours you need to even get in at a regional before she can go mainline.

Less than a year seems really quick to become a pilot

Thinking the same. To earn a private license is about 50 hours of flying. Need several certifications after that plus anywhere from 1000 to 1500 hours flying time (depending on flight school attended) before the airlines will hire. Can work for $ after getting commercial certification

She already has her Private Pilot License and is halfway through her Instrument rating. “Employed as a pilot” has many meanings. Most large flight schools can train you from 0 hours to all your licenses and ratings through instructor in 6-9 months She’s already part way there. Yes, your ATP, airline transport license, does require 1250-1500 hours and you must qualify for that before a regional airline will hire you. However one can make money/be employed as a pilot well before then. Do some research on your own to find out more if you want to be further educated about it.

Pilots are in short supply and the big airlines are running their own flight schools to fast track them and do it much cheaper!

A friend of mine started flight school earlier this year and will be done by December. All in all the program is a little under 12 months. However, he said he will likely need to teach flight school for another year afterwards to get the hours you need to fly professionally.