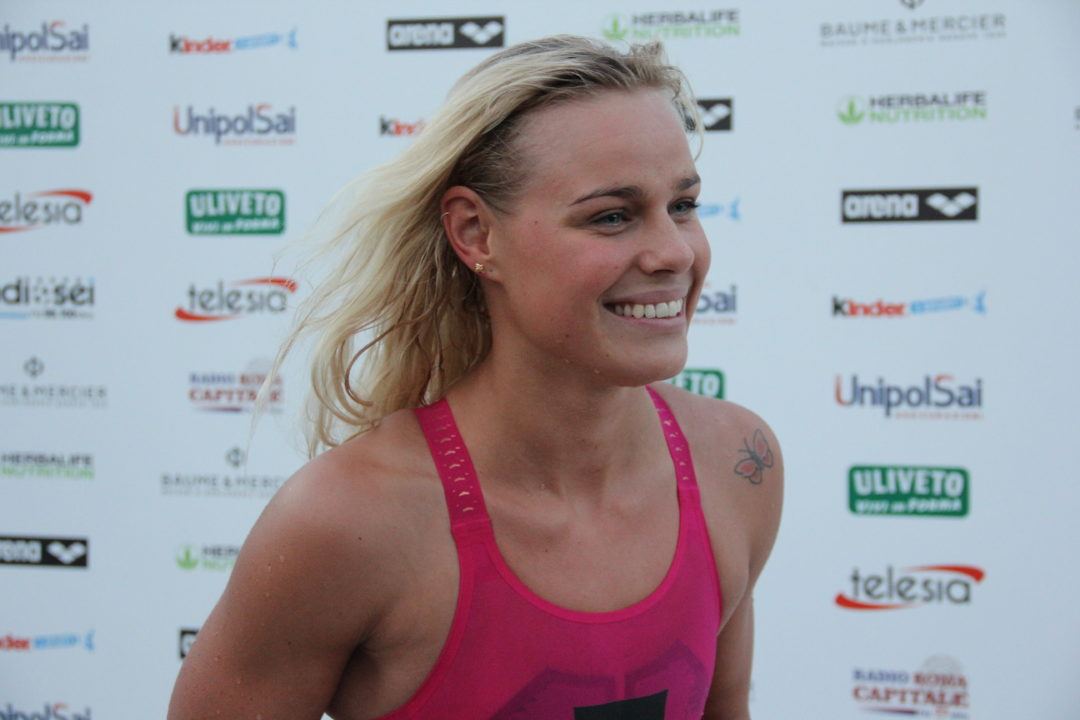 Pernille Blume of Denmark races to fast 1st 50, but misses out on 100m freestyle final in Glasgow. Current photo via Giusy Cisale

In the 2nd semi-final of the 100m free race at the 2018 European Championships here in Glasgow, top-seeded Pernille Blume of Denmark, who earned a wicked-fast 52.97 in the morning heats, seemed to swim a two-part race en route to falling out of the top 8, failing to advance to the final.

In a somewhat bizarre twist of events in the women’s 100m freestyle, Danish national record holder Blume looked like she was gunning for a 50m freestyle split, followed by an open turn into a much slower back half. She opened with a blistering 23.98, just .23 off of her own 50m national record, only to close in 30.73 for a final time of 54.71. That wound up placing the Dane in 10th place overall and out of the final.

Post-race, Blume said that she wanted to beat Sjostrom’s winning 50m freestyle time of 23.74 from the individual event here, while still making the 100m free final. In that 50m free individual race, Blume took silver behind the Swede in 23.75, just .01 behind.

Blume holds a personal best of 52.69 in the event clocked last year in Budapest at the World Championships, but has already been as fast as 52.72 this year, which ranks Blume as the 4th fastest swimmer in the world.

Of note, Dutch multiple Olympian Ranomi Kromowidjojo had dropped out of the 100m free race to focus on the 50m fly, indicating she believed she had a better chance in that race. However, with Blume now out of the race, Kromowidjojo’s historic times in this event falling in the 53-mid’s and high’s would situate her in a possible position for a minor medal had she swum.

Yeah, if she wasn’t breathing in true 50 fashion that 2nd 50 couldn’t have been easy.

coming from a Sarah fan , no wonder u are posting lol

You can’t justify it no matter the reason. She topped the prelims by half a second, and Sjostrom is not in WR shape. It would’ve come down to the wire at worst and she gave up a sure medal to make a time. Got neither, which was deserved.

1. Sarah have said that she will be okay with season bests, and that she isn’t so focused on breaking WR this year.
2. Yep, indeed, it was deserved.

Horrible horrible choice…Did her coach know? Ruined the 100 meter final. Would likely have won…what a joke